Just in case anyone has forgotten since last week’s Grey’s Anatomy, Derek is terrible. I know it, you know it, Meredith knows it. His kid, who for once in his short life is not invisible, knows it too. He senses that Derek is in the house, and starts crying. Meredith has her issues, but she knows that when your kid wakes up crying, you’ve got a Code Yellow, which calls for an immediate Diaperectomy. But Terrible Derek hasn’t parented a day in his life, and thinks you’re allowed to just turn the baby monitor off and go back to sexy times. No, Derek. You’re terrible.

RIGHT. SO. Derek is home from DC (Still? Again? IDK, I’ve lost all interest in his whereabouts.) but has to make one last trip there to make his presentation to the President’s Council, and then he’s back to Seattle for good. Hooray? Or no. Except how he keeps saying he’ll be right back, like some kind of Tom Hanks Castaway, so I think we all know that it’s not going to be that simple. 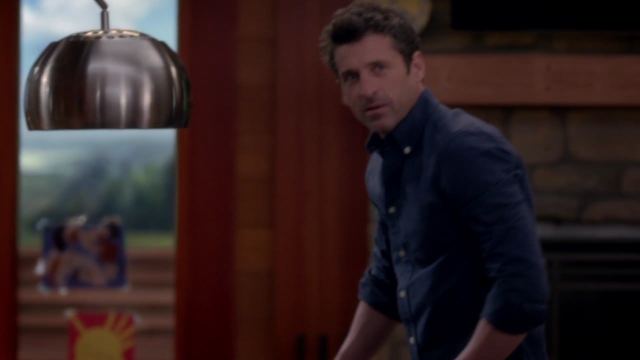 Where did these small children come from? 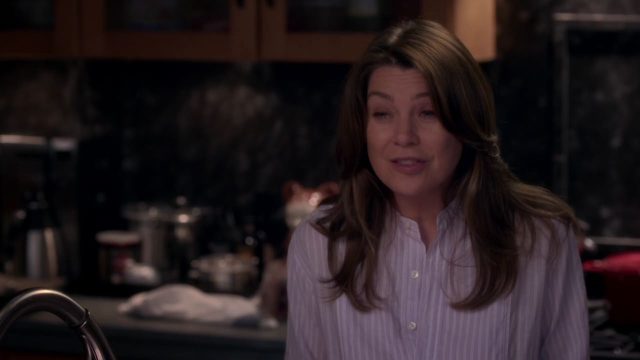 Amelia bursts into Derek and Meredith’s house, dressed in yesterday’s clothes with Owen hot on her heels. Meredith and Derek give her A Look, which is a bit rich, coming from these two. She scoops little Bailey out of his high chair, where he’s adorably vacuuming up chunks of cantaloupe, and uses him as a human shield. Good thinking, lady. 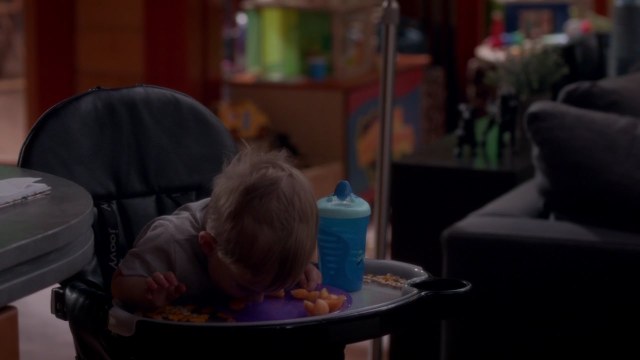 I can’t believe these people are my parents.

I guess when Christina left, she tasked Meredith with keeping up with Terrible Owen’s assholery. I love Christina, but seriously, babe? Meredith’s got enough to keeping track of with Terrible Derek. She can’t possibly keep up with Terrible Owen as well. But that doesn’t stop her from herding Amelia into a corner and reality checking her. Amelia would like Meredith to leave her the hell alone, thank you. Edwards scoots in at that exact moment (girl has got the worst timing in the whole wide world) and starts poking around. Amelia makes a muderface and sends her on her way. 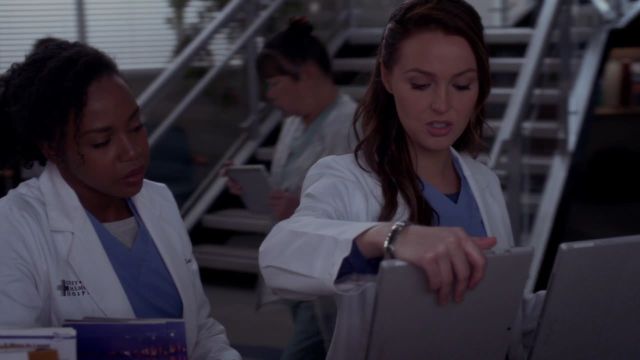 I’m going to email you these scissoring videos. 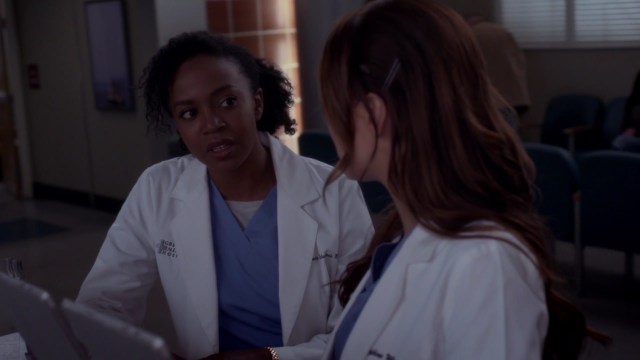 At Grey Sloan Memorial Drama Bomb Warehouse, sweet Amelia is so adrift. She’s in the deep water, and she can’t get her bearings, and the Patient of the Week isn’t going to help at all. It’s a teenager named Marissa who has some severe abnormalities in her spine, but that hasn’t stopped her from becoming the best junior golfer in the country. When Callie, Amelia and Ben express surprise that she’s been able to play through the pain, she sits them all down and tells them if she was a dude, no one would be surprised. She is excellent, and she’s not ashamed of it. Oh, Marissa. I wish you were not the Patient of the Week! Please don’t die!

Callie and Amelia bounce to discuss Marissa’s treatment options. Amelia wants to do one thing, and Callie wants to do something much more aggressive in hopes of further stabilizing Marissa’s spine. Amelia says that the point is to preserve range of motion so she can keep playing golf, and Callie says, I shit you not, “She might have to let that go.” Haha, because Callie is so good at letting things go. The best at it. Her second doctorate is in Dropping It. It’s her favorite hobby.

Terrible Owen lurks in, points at Amelia, and grunts. Callie spits fire from her eyeballs. Looks like they’re going with Amelia’s plan.

WHO IS READY WITH PENIS JOKES? I hope you’ve got plenty, because Jo, April, Edwards, and Bailey catch the incoming trauma of the week, and it’s a dude whose willy has been removed from the rest of his person. His wife walked in on him getting steamy with his sous chef, and whacked it off with a knife. Talk about Kitchen Nightmares ba-dum-ba-bom! Luckily, he keeps his knives properly sharpened, so it’s a clean cut. April does something called the Groin Tourniquet Method which sounds HORRIFYING, while Edwards attends to the guy’s wedding tackle. Apparently they don’t have a doctor who specializes in reattaching penises (peni?) so April suggests calling Catherine Avery. Webber pitches a tantrum because of something that happened with Catherine that I can’t remember, but let’s just assume it was her undermining his authority in some way.

You are such a baby, Webber. All you boys are such big dumb babies.

April tells Edwards to flee with the penis, because Jackson is waiting on it. Edwards puts it in pan and starts hauling ass through the hospital, bobbing and weaving and dodging around all comers. It is the greatest tragedy of my life that she doesn’t trip and send that penis flying through the lobby. Moment of silence for the gifs we’ll never have. (Remember when that happened on One Tree Hill? Remember when that dog ate Dan’s heart transplant?) 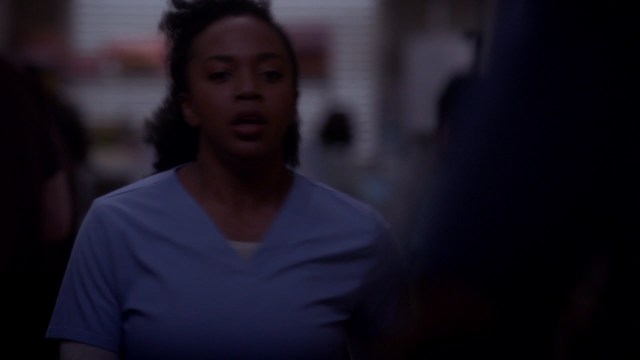 I did not save Dr. Geena Davis’s life for this shit.

Anyway, April isn’t an intern anymore. I’m not even sure if Webber is her boss. She’s going to do what’s best for her patient, and what’s best for her patient is Catherine Avery. She calls her, and Catherine helicopters in. April meets her on the roof, and there is this wonderful, lovely moment between the two of them. It’s so loud and they can’t really speak, and I’m not sure there are even words for what April has been through, so Catherine just cradles April’s face and April nods, her eyes full of tears. Some tremendous chemistry between those two ladies in this scene.

Elsewhere in the hospital, Maggie bumps into Ethan the x-ray tech/radiologist she went on a date with. Dude literally just looks at her and walks off. Um? She turns to the nearest available body, Alex in this instance, and starts demanding to know The Fuck, bro? Alex has no answers. Callie wanders in and exposits to us that she too went out on a crappy date, this one with Officer Dan. He was stupid, and she doesn’t have time for stupid, so there. Welp. I guess we all processed our feelings about that for nothing, eh?

Maggie rocks up into Ethan’s little cubicle and demands to know why he never called her after their date. Ethan tells her—get this—it’s because she talks too much. Apparently she didn’t ask enough questions about his feelings, and he didn’t like it. His other sticking point is that Maggie paid. He says it two times. “You paid. YOU PAID.” Maggie, baby, get out now before you’re married to this guy. Terrible Owen and Terrible Derek are all I can take. Please don’t make us suffer Terrible Ethan too.

Arizona, Callie, Bailey, and Meredith are all in the gallery, watching the penis reattachment, discussing how pissed off you have to be to cut off a person’s junk. Arizona is adorably confused about the whole situation. She can’t fathom what the big deal is.

Arizona: It’s just his penis! He doesn’t even need it! It’s not like it’s his leg! That’s some shit, right there, when your spouse cuts off your leg.
Callie: Girl! I was trying to save your actual life!
Arizona: A life without leg is no life at all! And anyway, I only almost killed you once.
Meredith: I almost killed Terrible Derek once.
Everyone: Same, girl. Same. 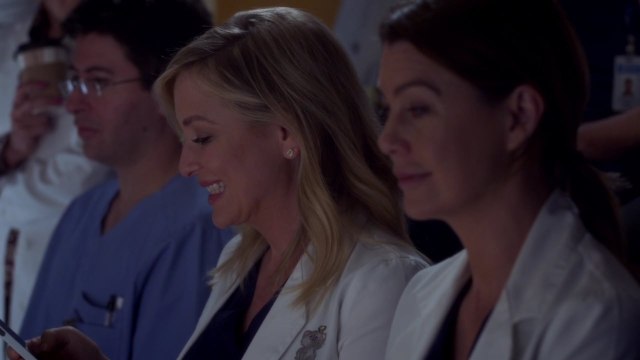 These scissoring videos make me want to scissor. 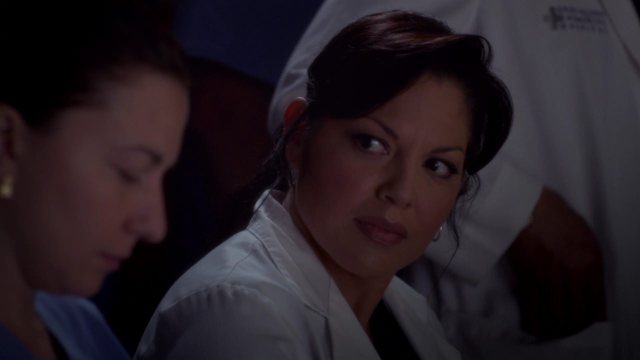 Bailey and Meredith are about to get into a Strangers On A Train situation when Ben comes bursting in, looking for Callie. Turns out Marissa’s deformity was much more severe than Amelia anticipated, and she’s in danger of being paralyzed. Amelia and Callie holler at one another for a hot second before settling into a game plan. Om nom nom that tension was delicious. Another round for the table. They save Marissa’s life, but she’s never going to play golf again. Marissa’s mom flips out on them. Callie knows they did all they could, but Amelia internalizes everything. She heads straight to Terrible Owen to tell him off for jumping into her and Callie’s initial discussion about treatment plans. She says that if he didn’t have all of these feelings in his pants, he’d have stayed the hell out of it (Owen has never stayed out of anything in his life) and she wouldn’t have ruined this girl’s life.

Okay, somehow Alex and Maggie are in an O.R. together. Maggie is still upset about that crap Ethan said, but Alex, out of the middle of fucking nowhere, has got aaaaall kinds of feelings he wants to share with Maggie. He thinks she’s beautiful and cute and sexy and her hair and her eyes and if Ethan doesn’t get that, then screw him. It would be really nice if it weren’t for, you know, his girlfriend.

Maggie goes to tell Ethan that she maybe shouldn’t have brought quite so much thunder. Ethan is placated. He tells Maggie that next time, he’ll bring the thunder. We’ll all bring our barf bags.

Hey, so, what’s worse than getting your penis cut off? Getting your penis cut off twice! Penis Guy and his wife reconcile — maybe not the kind of decision to make hopped up on morphine, but okay — much to the displeasure of his girlfriend/sous chef. Her best means of retaliation is to just whack the guy’s willy off again. No points for originality, but it doesn’t make a statement, I guess. Edwards grabs a latex glove and chases the woman through the hospital, catching her just before she flushes the penis down the toilet. Catherine, much impressed with Edwards’s surgical skills, quick thinking, and penis retrievable abilities, offers her a spot in her program in Boston. While everyone else thinks it’s great, Edwards is not so sure she wants a career handling penises. 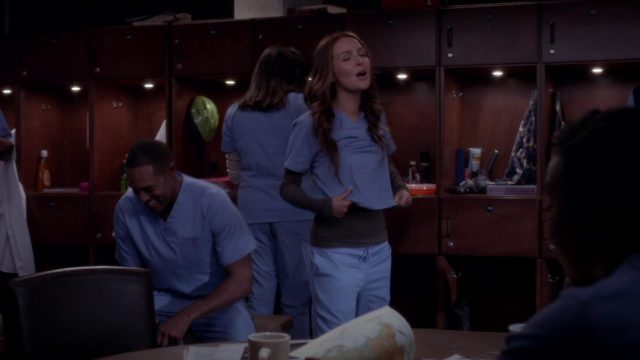 Multiply life by the power of twwoooooo. 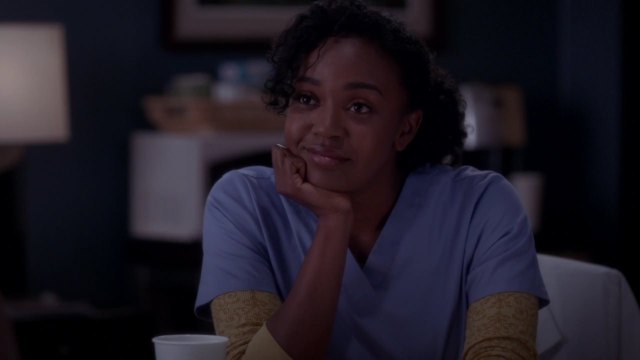 Back at the hospital (What day even is this?) the phone rings. It’s the White House looking for Derek, who never showed up for his meeting. 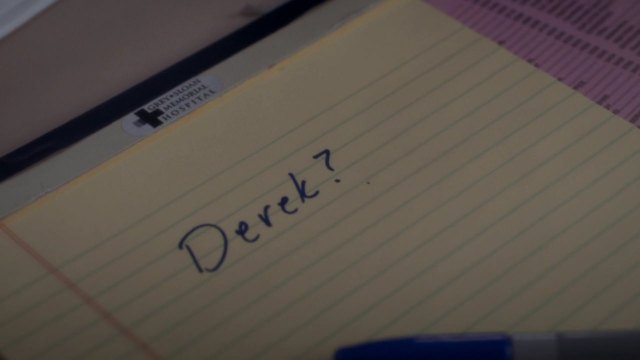 Next week: Another g-d plane crash!