I’m going to make a bold claim here: Space Battle Lunchtime, the new comic from Oni Press by Natalie Riess features the cutest cooking contest in the history of food — yeah, even cuter than The Great British Bake Off. Please don’t hate me; just give this comic a chance. It is seriously terrific and seriously adorable. It tells the story of Chef Peony, a super-cute Earth chef and baker who’s roped into competing in an intergalactic cooking show called Space Battle Lunchtime. It’s like The Great British Bake Off, Chopped, MasterChef, MasterChef Jr. and Cutthroat Kitchen all combined with the cutest parts of Star Wars: The Force Awakens and Bravest Warriors. So basically it’s amazing. Basically you need to be reading it right now. 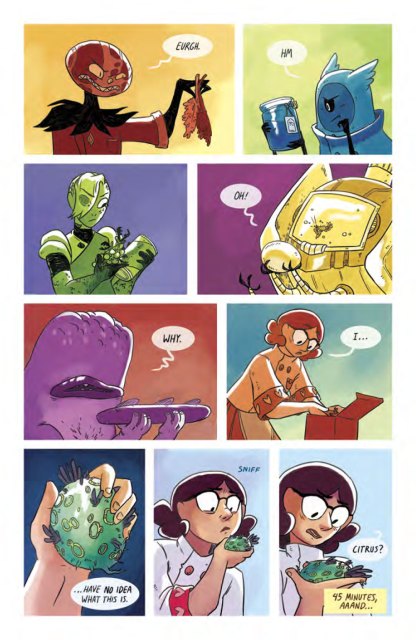 In the first issue, we see the main character of the book, Chef Peony, working in a shop on Earth when some aliens come and ask if she wants to be on a cooking show. She’s then taken up to a space station and realizes just what she’s signed up for. The other chefs — Chef Owline, Chef Jacques, Chef Melonhead, Chef Meatabax and the mysterious and hot Chef Neptunia — all seem to be really serious and all seem to really know what they’re doing. Peony’s never even heard of Space Battle Lunchtime. One of my favorite parts is when she meets Neptunia by falling into her arms and blushing, and the whole thing is beyond adorable and I can’t wait to see more of the two of them. I want Peony and Neptunia to kiss more than I want anything in the world right now, and I really really want a tattoo, a Hellcat Funko Pop and a copy of Zootopia from the Amazon digital store. 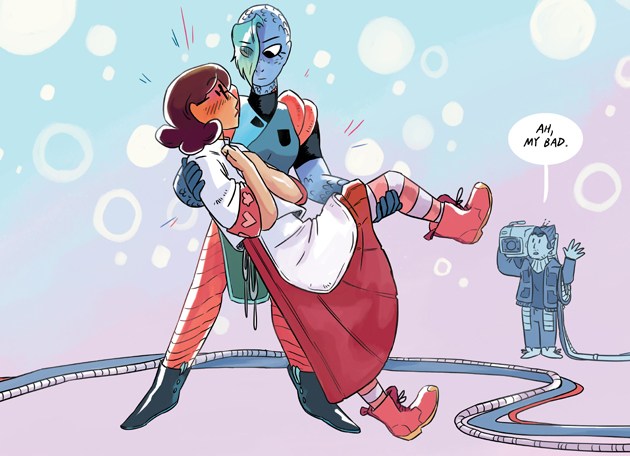 Peony isn’t just cute; she’s hard working, creative, clever and while she’s sweet, she also stands up for herself. She’s also a really great chef, even if the judges and aliens initially thought she couldn’t handle the competition. Even Neptunia, who seems like the nicest of the other chefs, didn’t want Peony to get in her way at the beginning. But eventually Peony earns Neptunia’s respect and even maybe more than that. I’ve read the first four issues, and they are A TREAT. But I also don’t want to act like her cuteness, and the comic’s cuteness, aren’t major selling points for this comic, they absolutely are, and that’s a brilliantly great thing. At one point in issue #1, Peony and the comic were so cute I literally cried. Good job Natalie Riess.

.@Snarlbear in case you were wondering, this is the page that made me cry pic.twitter.com/RlmNB9T2Tr

Riess is quite a talent, as her writing and art wonderfully keep pace with each other. Both continue to push the other forward into more cuteness, more creativity and more exciting adventures. Her different alien species and alien food ingredients are inventive and fun to look at, her dialogue and plotting are more than enough to keep you wanting more and she’s terrific at crafting characters that you latch onto right away and only get more and more interested in. Her colors, character designs, costumes, food illustrations and outer space designs are all totally gorgeous. It’s really amazing that she does so many different things so well. She’s definitely a creator I look forward to seeing work from for many years to come.

SBL is one of the books created by Oni’s recent open submissions initiative. If any of the other books are this good, Oni’s going to have to be certified a genius for that idea. Oni really has some terrific titles right now, with this one and Another Castle being my two favorites. I’m also ridiculously excited for Maddy Flores’ upcoming YA graphic novel I Want You, which will be published by Oni Press. You should all be checking out Oni Press right now, they’ve got some great people on their team, like Robin Herrera and Ari Yarwood, and some super great creators and books. If you’re not reading anything by Oni, Space Battle Lunchtime is a great place to start.