Described as “a fantasy diary comic,” Aatmaja Pandya’s webcomic Travelogue shows the adventures of three wizards, Nana, Adi, Emerene and Princess the goat as they travel through a beautiful and wonderfully realized fantasy world. In Pandya’s own words, you should read Travelogue “if u prefer side quests to the main story, or if you’ve always wanted to try the fruit from animal crossing.” Honestly, the more I read this comic, the more I love it. It’s quickly becoming one of my favorite webcomics. 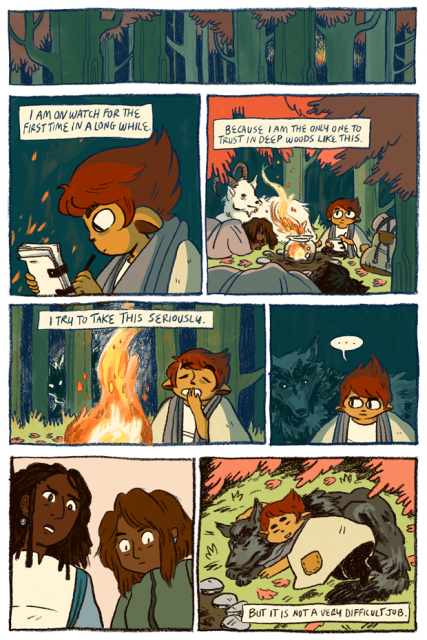 This comic is mostly about two things: the way Nana sees the world and the way the three friends care for and relate to each other. While it’s often fun to read exciting and thrilling stories with action around every corner, Travelogue is a welcome change of pace. Nana is small, and frankly, adorable, but they’re also a powerful magician, and since the whole thing is told from their point of view, we know that they care deeply about Adi and Emerene. We don’t know quite as much about the others, but there have been hints about their backstories that I can’t wait to learn more about. 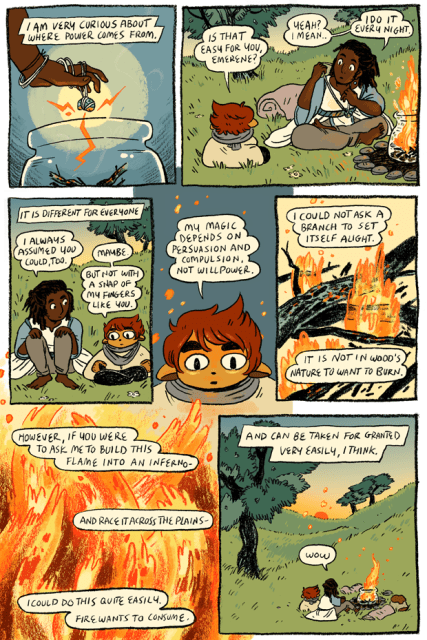 The writing in this comic is really soothing, and really quite different from a lot of other similar stories. While it is a fantasy comic, there doesn’t seem to be any grand quest or even really any bad guys. It’s just a nice story about a group of friends travelling together. It’s like coming home to a warm, home-cooked meal made with love by your mom after a long day wandering through the forest. It feels comfortable, it feels cozy, it feels like a story you’re hearing from your great auntie, the one in the family who knows all the history and all the good secrets.

I also really like the way Pandya goes around all the tropes of usual fantasy stories. This isn’t Tolkein or King Arthur or Game of Thrones — the characters are people of color and the rules aren’t the ones we’re used to. Like, instead of calling Adi an elf, she’s a Northerner, and instead of calling Nana a halfling or brownie, she has one of the villagers call Nana a Baccha child. It’s a really refreshing change of pace. 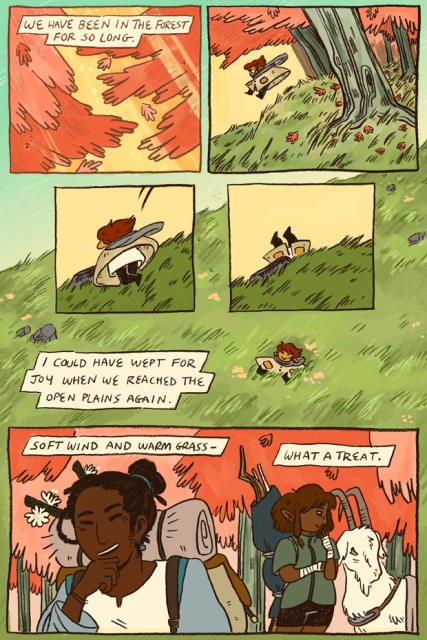 It’s weird, because these comics seem so cute and adorable on the surface — and they are, Pandya has learned well from her anime influences — but it’s also really beautiful and well-built fantasy. The magic and culture is thick and rich and seems ancient and real. She makes you desperately want to live in the world of Travelogue, and to be honest, Pandya’s art is so gorgeous that sometimes I feel like I’m getting lost in it. Like in one comic when Nana dives into an open plain after leaving the woods, it looks like you could join in with them and swim through the grass. I could stare at this page forever. I may be a little bit in love with the way Pandya draws scenery.

Pandya has plenty of other terrific comics available to read online. Baker’s Dozen is beautiful and brilliant and is a personal favorite of mine. “a coming-of-age story set in a South Asian fantasy world.” It’s about a young, clumsy girl named Radhika who discovers her place in the world on the night of a festival honoring the mother goddess. Again, Pandya has shown that she’s a master at spinning tales of magic and the people who use it. 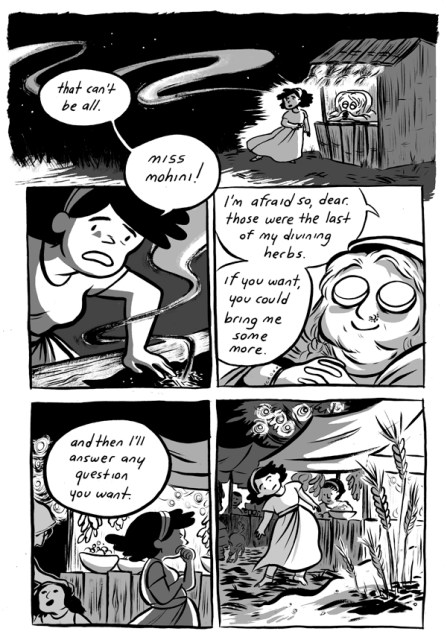 Travelogue isn’t very long right now, so that makes this the perfect time to jump on board. If you’re interested in buying her comics, she’s currently sold out of Travelogue (but said on twitter that she’s working on another printing), but you can buy physical or digital copies of Baker’s Dozen. She also had a comic featured in the anthology Chainmail Bikini, which I previously featured here. You can also follow her on tumblr and twitter.