The Kickstarter began a couple weeks ago, and thankfully it’s already met its initial goal, but that doesn’t mean you shouldn’t jump in right now. Since it’s met its goal, you know that you’re supporting a successful campaign and therefore you’ll get your reward. Seriously, anyone who’s a fan of comics should buy a copy of Agents of the Realm. It’s gorgeous, funny, the action is great and the female friendships are super fun.

I want everyone to read this comic and support it. I’m constantly thinking about all the Agents comics I’ve read and I’m constantly on the edge of my seat waiting for new ones to come out. Now, I absolutely cannot wait to hold this book in my hands. With all that in mind, I talked to the creator of Agents of the Realm, Mildred Louis about the comic and about this campaign. 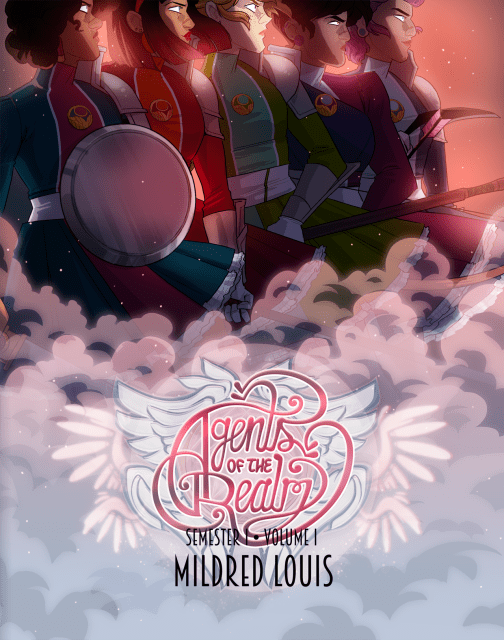 Agents of the Realm cover art by Mildred Louis

Mey: Can you just give me a quick history of Agents of the Realm? How did you come up with the idea? How did you get to the point with the comic where you wanted to make a Kickstarter for a physical release of it?

Mildred: Agents of the Realm kind of started off as a joke idea. I was getting incredibly cranky over the delays with Sailor Moon Crystal’s initial airing and kind of started fooling around with the idea of starting my own magical girl series. There’s times when I sit back and think about it and honestly laugh over it. The original version of Agents was pretty… bad hahahaha but eventually it kind of just stopped being a joke and started becoming something I really wanted to see happen. I think once I really started taking the story seriously, it became important for me to see it as a book. I love how it being a webcomic increases it’s accessibility, but I’m also a pretty tactile person, so being able to actually hold all of that work I’ve put into it will be pretty overwhelming.

I absolutely love your art. The characters of Agents of the Realm have maybe my favorite faces and facial expressions in all of comics, definitely my favorite fashion in all of comics and the comic has some of the absolute best coloring I’ve ever seen. Are you excited to see how all of that will translate from the internet to physical pages?

Aw jeez, thank you!! I’m honestly bouncing off the walls with excitement to see how it translates to paper. I got the chance to print the first chapter last year to have at con seasons, so I’ve already gotten a little bit of a taste of getting to see it in print. Seeing the entire story so far, however, will be kind of amazing because it’ll be a different way to read it from beginning to end of volume 1. 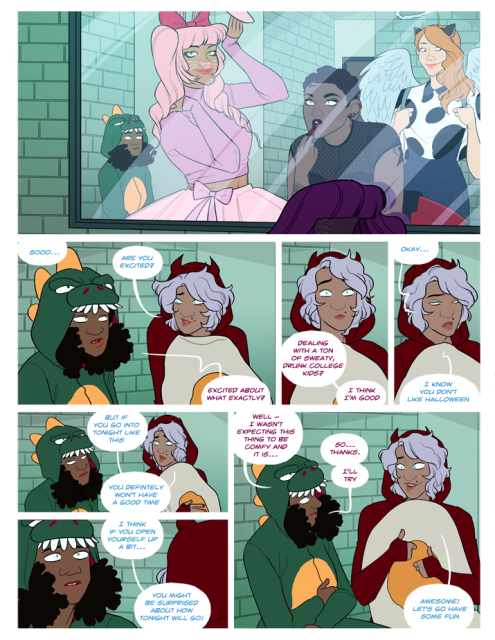 What’s your goal with publishing this book of Agents of the Realm? What do you hope fans of the series will get out of it?

Well, if my readers are anything like me, I think they’ll be able to appreciate getting to actually have the story right in front of them. I know it makes me sound a little bit like an old timer but there’s a different experience that comes with reading a book that’s actually in your hands versus one that’s on the screen. I hope getting it made into a book helps them have a new way to experience the story and ingest it all.

As a woman of color, I really, really love that most of the characters, both main characters, and a ton of background characters, are POC. Can you tell me a bit about that decision and why that was important to you?

Honestly, it just came from me getting fed up with craving this my entire life. I’m a Black woman, and while there’s been some representation through the years, it’s always been disappointing not being able to see characters that look like me in the genres that I actually gravitate towards. Often times when you see PoC in stories, they get reduced to stereotypes and/or very very very basic roles. I just wanted to use this as my chance to unapologetically put them at the forefront and show that we, too, can be heroes.

So far, one of the main focuses of the comic has been the relationships between the main girls. While there is some romance going on with secondary characters, the main focus is on the friendship of the main five. Why was that important for you to focus on?

Okay, so if I had to be really honest, it’s kind of like my love letter to my friends. I ended up getting to a point in my life where I’ve started really taking stock of the kinds of people I have around me. There’s been a lot of people who have come and gone but the people I still have around me leave me constantly grateful. Without them, I probably wouldn’t have made it through the very rough patches in life as well as I have, and without them, I definitely don’t think this story would have had a chance of happening. I think it’s important for people to remember that they should be surrounded by people who genuinely love and support them and this story is kind of my way of gently providing that reminder.

Even though those friendships are the main focus, we do also see some of the Agents exploring their love lives, and several of them are queer; why did you decide to have queer characters featured so prominently?

Growing up, I didn’t really come across much representation of WoC in Queer romances. This ended up really messing up how I saw myself and that aspect of my identity. As much as it’s important to show queer content, it’s also just as important to diversify how that content is presented. It’s something I’m still personally working on, and am constantly re-evaluating to make sure I’m doing my part in that too. 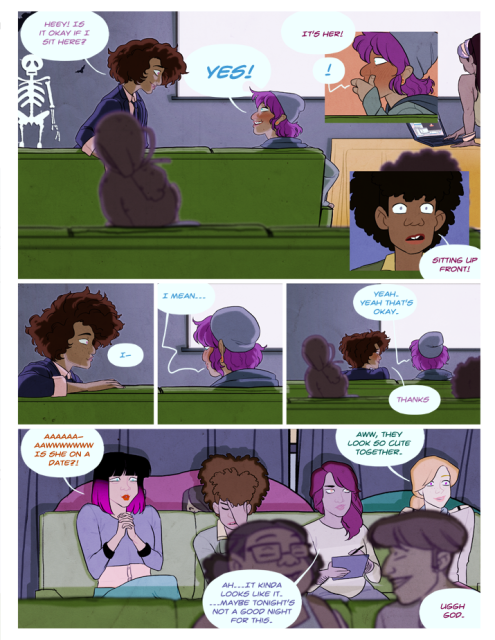 Speaking of queer characters, two of my favorites, both in Agents of the Realm and on the whole internet, are Jordan and Mackenzie. They’re totally adorable, agree or disagree? But seriously, Can you talk about those two and their relationship a bit?

Uh AGREE. Oh gosh, writing and developing their relationship is kind of the break I give myself from the heavier stuff in this story. There’s so much I have planned for them, most of which I can’t give away for major spoiler reasons but let me just say that it is just only going to get more cute from here. The major thing about their relationship, though, is that it’s a learning experience for them both. It’s emotionally new territory for both Jordan and Mackenzie in that it’s a much more playful and sincere situation than they’re both used to. Jordan doesn’t have much of a good track record with positive relationships and the same goes for Mackenzie. How they both deal with that is different and causes some tension and misunderstanding but… once they get over that hurdle, it’s just pure cuteness.

You also have found a perfect way to balance beautiful and exciting action sequences that are about the Agents being Agents and fighting evil by moonlight, with sometimes fun, sometimes serious and always compelling slice of life scenes that are about the Agents being college students and winning love by daylight, how did you find a balance between those two things that worked for you?

Honestly, thank you for this! I feel like this is something that I’m actually still working on and trying to get the hang of because most of my writing experience is on the slower moments, not so much the action-packed stuff. I’ve been spending more time looking at more action-y things to really help create that dynamic contrast between those slower moments and the more high energy ones. 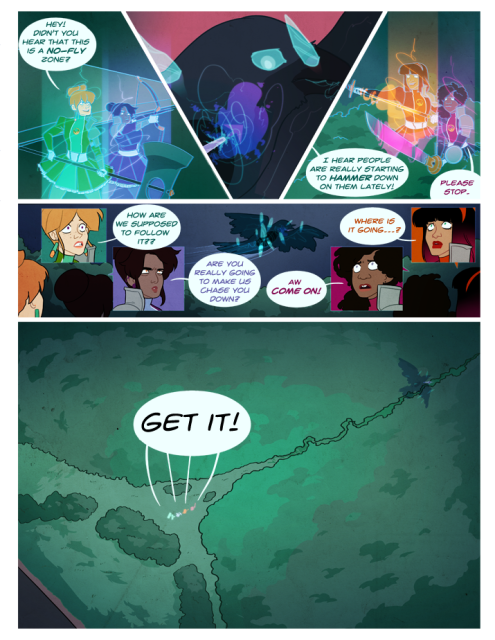 Do you have just any final thoughts about your comic or why you think people reading this should support your Kickstarter?

Working on this story has been a real experience. It’s been really cool to see how much I’ve grown while working on a project that’s pulling from so much of my childhood while also implementing much more from other life experiences. I’m really happy to see that Magical Girl styled stories are making a come back and I’m also hoping I’m doing the genre justice. If Magical girls, stories about ladies being friends and/or kissing is your jam, definitely take some time to check out my Kickstarter and help me get the word out about it!

As soon as I had a little extra spending money I backed this campaign, and I’d absolutely suggest that you do the same. This comic is great, Mildred is great and this book is going to be great. There’s still two weeks left and several great stretch goals if the campaign gets enough money, so go check it out now!