The first time I knew I was a top was when a girl I was dating said, “Please, hit me harder,” and then, later, whispered, “I can take more than you can give me.”

It was a dare. Her eyes flashed when she said it. She boasted her ability to bottom to heavy pain and sensation, and she was right — I was holding back, fearful of my own power. It scared me. It felt like a bottomless pit of growling, howling violence that I was just barely keeping in check.

Her dare made me stronger, and made me ask: What would happen if I opened up that part of me and allowed myself to explore it? Could I be trusted to honor safewords, to stop if something went wrong, to be accountable if we went too far? How could I balance this fear, this real and ravenous inner sadist, and reality?

That was the puzzle I wanted to crack.

The first time I knew I was a top was in second grade, when my group of three wouldn’t do what I told them to, and they became a group of two. I was always the leader, always bossing them and my two younger sisters around. Part of my growing up process became repressing the wildness, the inclination to be in charge and in control and right. I was told that I needed to share, to not be bossy, to let other people have their way sometimes, to put my needs second, to consider other people’s needs more.

To start, it was just adults who told me to do this — other kids, especially my friends, happily went along with my plans. But then they started to want their own turns in charge, and to tell me I was no fun and wrong and mean, and I spent too many birthday parties in a row at the pizza parlor wondering if anyone would show up.

I was a bottom when I first started trying out kinky sex play, in part because it was easier. Topping — and especially topping for my pleasure — was much, much harder, because it was going back to a feeling I’d suppressed. I had trained myself to knock it down, hard, and so it was even harder to ask it to come on out and play. 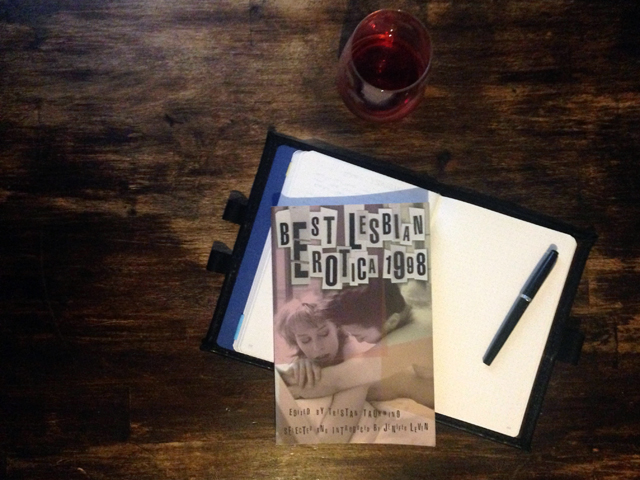 The first time I knew I was a top was when I read Karlyn Lotney’s story “Clash of the Titans” in Best Lesbian Erotica 1998, and broke the spine open to that spot from reading it so often. The story is pretty switchy, following a butch top and a femme bottom through an evening of multiple scenes of kinky play. The dirty talk, the strap-on sex and the play with power exchange in every line had me panting.

At first, I was puzzled about why I liked it so much. The complexities of gender are explored, but without exploitation. The sex descriptions are really hot. I like how they’re mutually into each other, taking turns, getting their needs met.

I believe experiences and emotions are stored in our bodies. I once sat in on Emily Nagoski’s class at Smith College where she mentioned, almost in passing, that she didn’t believe there is any such thing as the mind-body split, because the mind and the body are not two different things; there is only the embodied mind.

Often I’ve wondered if that’s why I’m a top: because I seek the experiences of guiding someone through a process of release. I seek to provide relief and refuge from the complicated realities we face and combat every day.

There wasn’t a singular instance where I knew, without a doubt, that I’m a top. Maybe identity is more fluid than that, anyway. But many small things have added up to the whole, and while this view from the top is still occasionally fraught with challenges, it is precisely where I want to be.

* Full disclosure: I now lead workshops like this one. Over March 20-21 in Oakland, CA, I’m cofacilitating a Wicked Equinox weekend on Tantra & SM with Alex Jade. Go to bodytrustcircle.com and get on the mailing list to stay informed.