Hi weirdos! It’s time for your Wednesday Arts & Entertainment / Pop Culture news brief starring me, Riese. Next week, Heather will be doing for you what I’m doing for you right now. We’re your part-time lovers. If you’d like to read about our new plan for delivering the news to your doorstep like a milkman, that’s right here.

Where is Boob(s on Your) Tube though

Next week is the last week of Glee, The Fosters and Pretty Little Liars, which means Heather will be able to start Boob(s on Your) Tube back up again and give you little mini-caps of all the queer storylines. So put that on your f*cking clip-board. 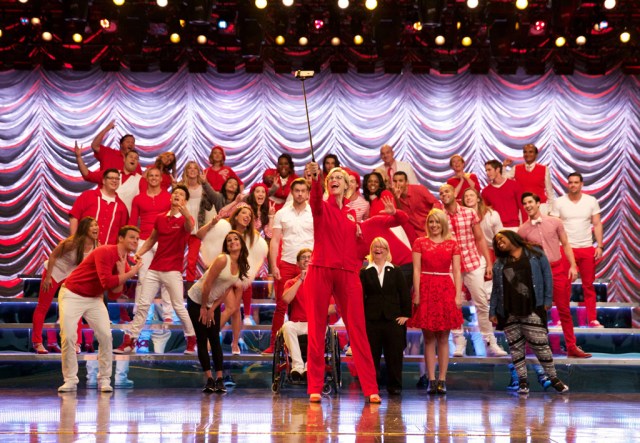 Glee‘s ending on Friday with a two-hour finale and there’s a lot of stuff out there about that. Honestly I’m enjoying this excuse to re-smash my face into a bucket of Glee pudding. It’s kinda gross but I can’t help it. The finale will feature an original song, This Time, that Darren Criss wrote for Lea, Mercedes will sing Diana Ross’s “Someday (We’ll Be Together),” and we can expect to see the original cast back on screen (including Finn, somehow). Remember Matt Rutherford? He was in the Glee Club for Season One and then he disappeared. HE WILL RETURN ON FRIDAY NIGHT. Just keep your eyes peeled for that.

Last Friday night, the cast did a Paleyfest panel you can watch on Yahoo, but not at the YMCA, because the wi-fi is not strong enough there. That’s a pro tip from me to you. The panel features Jane Lynch, Lea Michele, Chris Colfer, Amber Riley, Heather Morris, Darren Criss, Chord Overstreet, Dot-Marie Jones and Mark Salling. Darren Criss talks about the popularity of Blaine, Heather Morris says it’s great to play a character who has meant so much to young queer women, and Chris Colfer says he had his first drink with Kevin McHale and Amber Riley. It’s very cute and very funny and Jane Lynch is on point.

Vulture has 14 Times Glee Could’ve Ended (But Didn’t), People has the original cast’s first auditions and Glamour has Glee’s 10 Most Moving Musical Numbers. OUT Magazine is running a Glee Oral History, and Part One: Casting Call is up.

So The 100‘s second season ended last week and in The CW’s First Post-Apocalypse Bisexual: How The 100 Treats Gender and Sexuality, The Daily Beast says that “The 100 has proved to be one of the most revolutionary shows on television when it comes to gender and sexuality.” Furthermore, “The chemistry between Clarke and Lexa is palpable in their scenes together. And Clarke is a nuanced character. None of her traits—whether it’s being a leader or being bisexual—ultimately define her. ”

Here’s the thing about this show: over two weeks ago The Mary Sue kindly informed you that The CW’s The 100 Now Has A 17-Year-Old Female Canon Bisexual Protagonist. And you should be watching it and you know what I did, folks? You wanna know what I did about that? ABSOLUTELY NOTHING. I didn’t watch it. Even though I was told that The 100 is “continuing the theme of genre shows and science fiction being a beacon for those who consider themselves a little odd or out of place, offering places of escapism while also allowing depictions of ourselves who feel a little weird to live and breathe onscreen,” I did not watch it! On the positive side, I’m almost done with The First Bad Man and it’s super-weird but I love it, and Rachel’s gonna watch The 100 and then write about it. I’m gonna watch it too because I’m building a few encyclopedias in my head.

Just Some Other Things You Might Want To Know:

Liz Feldman‘s sitcom One Big Happy premiered last night and Heather wrote about it so we could all talk about it. Elsewhere on the internet, The Pittsburgh Post-Gazette finds no joy in it, Entertainment Weekly finds it to be very one-note, The Times Union says it’s a mess and The Guardian calls it an “excruciating sitcom.” The ratings weren’t super good or super bad, really.

If you watched One Big Happy or any canned laughter sitcom ever, you probably will find THE PSYCHOLOGY BEHIND LAUGH TRACKS as fascinating as I did.

My best friend Ilene Chaiken is the show-runner for Empire, which is the first bad thing I’ve heard about Empire. JUST KIDDING obviously she’s doing a great job and she hasn’t killed the gay character or anything. Over at The Vulture, she’s got some words about the show’s finale and it’s status as a breakout hit. Regarding how it feels to do this versus doing her own show (The L Word), Chaiken said, “I love doing my own work. Who wouldn’t? But more than that, the thing that excites me is doing game-changing television.” Also, Buzzfeed has a real good thing about What Empire means for blackness on television, which includes input from Saeed Jones, Buzzfeed News’ LGBT Editor. Also! Also. Also! Empire actor Jusssie Smollett recently spoke to Variety about his decision to come out.

Queen Latifah‘s starring as bisexual blues singer Bessie Smith in the HBO biopic and the trailer is hot hot hot.

Indiewire has highlights from lesbian “indie icon” Christine Vachon‘s Keynote at SXSW, including her feelings about the uphill battle to get female-driven dramas made.

Big news: Clea Duvall was on “This Just Out”! By the way, Clea Duvall is queer, but sometimes when we mention this really commonly accepted truth, someone will be like “BUT DID SHE EVER OFFICIALLY COME OUT?” and now I can say, “yes, she did, and then she kissed her mom,” and you’ll be like “what are you talking about?” and I’ll be like “watch this video and then you’ll know.”

Azealia Banks was on the cover of Playboy Magazine and gave a really interesting interview. She’s got some very compelling things to say about race in America, gender and bisexuality. I’m gonna be honest with you, I don’t know how to talk about her, in general, because she says a lot of things and I’m not completely up on it!

You’re bisexual. Do women hit on you often?
No, most women are scared of me. People have always been scared of me. I punched my teacher in the face one time when I was in preschool. We were playing house, and the lady was like, “I’m a monster! I’m gonna eat your family!” I punched her right in the eye. [laughs] It was a Head Start program, so I was three.

Pitchfork developed a Bechdel test for music, I guess.

Janelle Monae is building a music empire that will spark ‘a Revolution in Your Head.” It’s true I read it in Adweek.

I Wish I’d Written This Article But Instead Somebody Else Did, Dammit

74 Essential Books For Your Personal Library: A List Curated By Female Creatives

11 Female Characters Who Were So Traumatized They Needed A Haircut

Extremely honoured to be a part. COMING OUT shouldn’t mean being KICKED OUT. Over 20% of homeless youth in Canada identify as Lesbian, Gay, Bisexual, Trans, Queer or Two-Spirit (LGBTQ2S). Please find out how you can help. #OUTatNight ・・・ ”Thanks to #OUTatNight Ambassador @aliliebert for supporting #LGBTQ2S #homeless youth. Add your support at outatnight.ca by registering to sleep outside May 30th or sponsor a team”

Our Comedy Editor Brittani Nichols writes for The Xperiment for BET and yesterday she was ON THE SHOW being super-gay talking about being gay in a segment about being gay. I would embed it here but it auto-played, so definitely make the effort to click out.

DJ Carlytron directed this video about what happens when you don’t follow the golden rule of getting laid and going out to eat: fuck first, and THEN eat.

This past week we’ve published some funny L Word reviews, a list of the 17 most heartbreaking breakups in lesbian teevee history, Buffy fan fic, interviewed Hurray For The Riff Raff, and recaps of Glee 611, Grey’s Anatomy 1115, The Fosters 219 and Pretty Little Liars 522. Also, heads up: Jazz Jennings is taking over the world, “Steven Universe” is awesome, Scandal had an episode with Jasika Nicole and an elderly lesbian storyline and Broad City Swan-Dived Off A Sapphic Cliff Into A Sea Of Sexual Fluidity.