Alison’s lawyer has some bad news for her: No one believes anything that comes out of her mouth and so her best bet is going to be to take a plea bargain for Mona’s murder, in which she gets a sentence of 15 years and she’ll only be in for ten. The catch is she has to name her accomplice and the police are pretty sure it’s Hanna. I’m pretty sure it’s not legal to — you know what? Never mind.

My friends Nic and Nic and Heather (for real!) figured out that Ali’s lawyer is Ross’ girlfriend, Julie, from the second season of Friends. 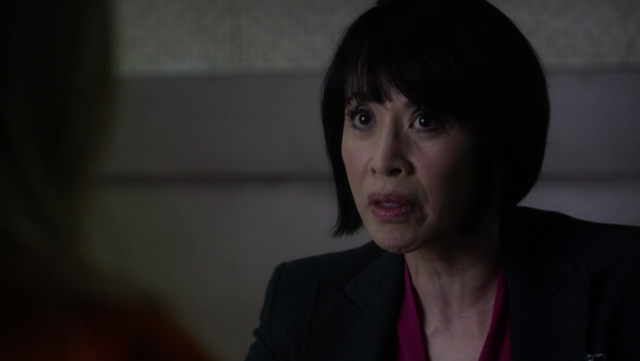 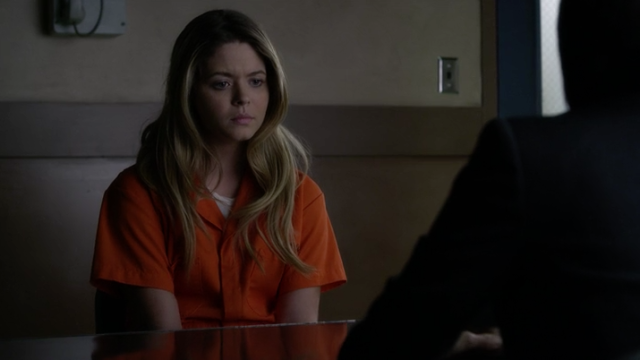 Rachel and Ross had already been married and divorced five times before I was born, so.

Melissa finally shows up at her London apartment to rescue Spencer from the clutches of Colin Bollocky Wankshite. Spencer is still panicked about getting home due to her luggage bleeding all over the place, but she’s determined to make the flight anyway. 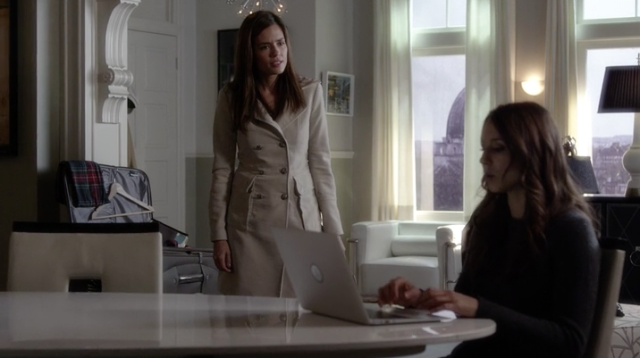 Spencer, get off the computer! Mom said to stop you from reading any more lesbian fan fiction! 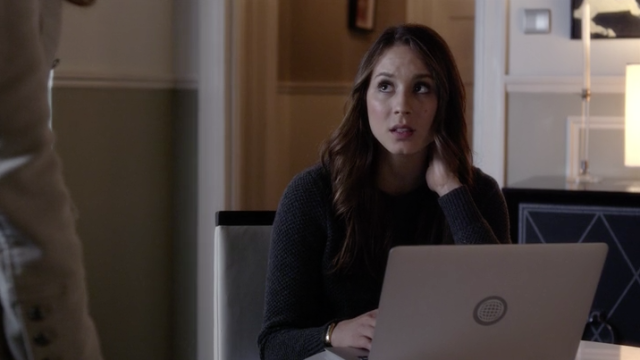 You and what army?

At Rosewood High, Emily rehashes the Varjak/Cyrus thing with Aria. To wit: Cyrus is a guy who cut Ali in some basement and took all her money, when she was dead. And then when she was back to being alive, he turned himself in for kidnapping her, but Ali wouldn’t name him as her kidnapper until exactly 24 hours and one second after the cops arrested him, at which time he was already out of jail and on the lam. First stop: Getting paid by Ali in a wig in the forest. And then Cyrus showed back up in a Rosewood dive bar in the woods and bought some blood from Mike and rode his electric scooter around pretending it was a Harley and then someone named Varjak smashed into his scooter with a truck and set him on fire and then a mummy killed him in the hospital. 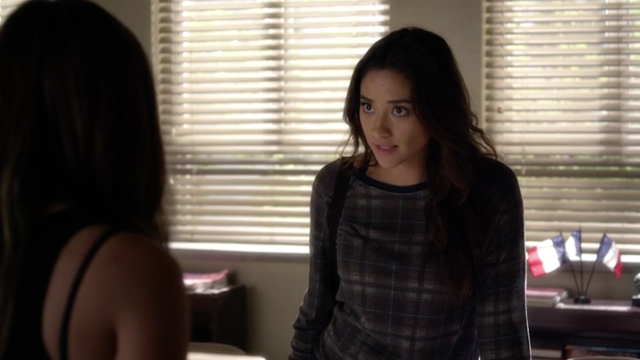 I am not going to let Spencer get away with trying to be gayer than me! I have been gay since DAY ONE. 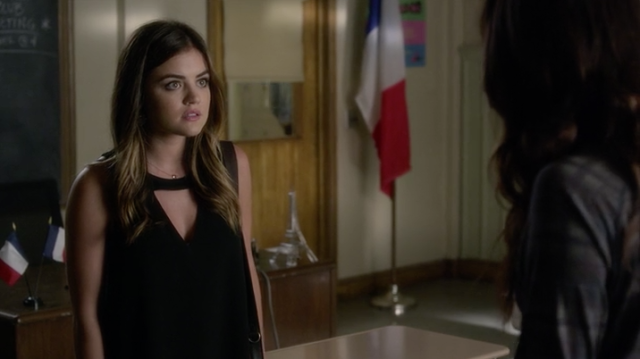 Oh man. Day one was like a million years ago. Remember Maya? Remember SEAN?

Emily wants Aria to check in with Ezra and see if he knows anything about Varjak and/or Cyrus from all the “research he did for his book,” which is what we are calling his systematic stalking now. You know what I was thinking about the other day? Remember when Ezra snapped at Emily about “Some people have real problems!” the literal day after a car crashed into her living room and so she was sleeping in the bedroom of — not one, but two of — her dead girlfriends? And that motherfucker knew it! Because he knew everything! And he still had the audacity to be like, “My high school girlfriend is taking away this kid I’ve known for five minutes who actually isn’t even my child and so some people have real problems, Emily, unlike you.”

Anyway, Aria says she doesn’t want to talk to Ezra about his “research” right now because she’s on a roll of being actively involved in this season’s mystery and he always ruins it.

On the way out the door to go to school, Hanna hears her mom and Veronica Hastings talking law things in the kitchen. For example, Alison has been offered a plea deal if she’ll say Hanna was her accomplice for Mona’s murder. Well, Ashley defends Hanna against that. And so Veronica tells her she’s been visiting Ali in jail. And Ashley defends Hanna against that too. And so Veronica says the thing about the storage locker in Hanna’s name with the barrel full of bodies inside. Hanna doesn’t hear if her mom defends her against that one; she grabs her backpack and skedaddles on out the door. 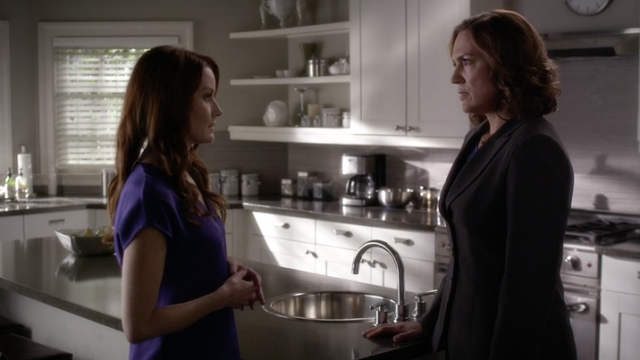 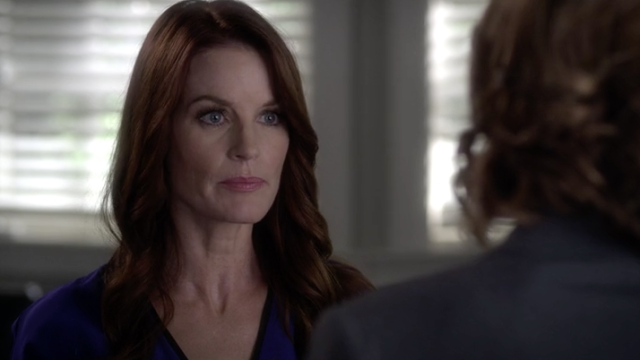 But if you really think we have a shot. 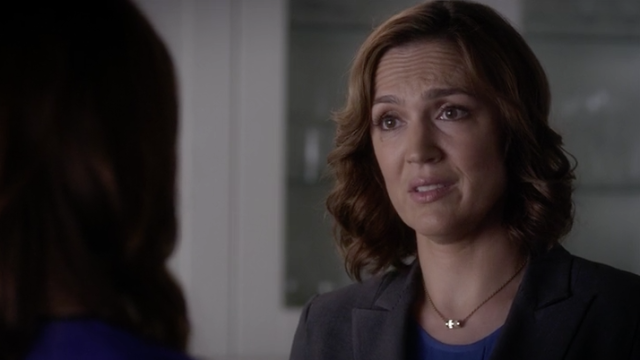 I promise you we can be gayer than any of our kids. 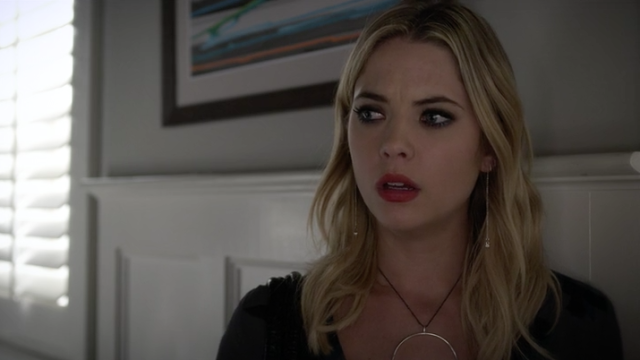 At school, Emily tries to reassure Hanna that Alison would never lie to the police and implicate Hanna and save her own ass. Man. Man. I would never date Emily. Like with Spencer, you know you’re getting paranoia, occasional delusions/drug-fueled daydreams, unquenchable competitiveness, and she’s always going to be correcting your grammar. With Aria, you know you’re getting someone who wears raptor fangs as earring and someone who can turn literally any conversation into a thing about her. But you know those things going in. Emily is such a pendulum of emotion! Everything’s so black and white! Everybody is Good Guys or Crackpots! One day she’s smooching you and defending you with her Nate-stabbin’ pocket knife, and the next day she’s dumping you or throwing your ass in jail, and the next day she’s back to assuming you couldn’t even tell a white lie! It’s a good thing she’s the prettiest person on earth.

Heather has written 941 articles for us.