In our recent Autostraddle Grown-Ups Survey for readers over 29, we asked “who was the first lesbian or bisexual celebrity or public figure you remember being aware of?” Although the question was intended to be about women, many named men regardless!

The Top Ten Most Popular Answers To “Who was the first Lesbian or Bisexual Celebrity / Public Figure you were aware of?” 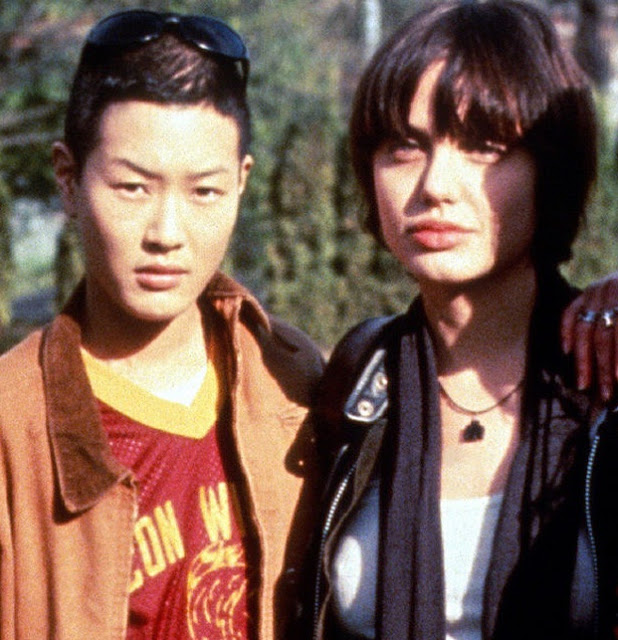 Angelina Jolie had her bisexual awakening in 1995 on the set of Foxfire, when she met Jenny Shimizu and “fell in love with her the first second I saw her.” Jolie said she would’ve married Jenny if she hadn’t married her first husband, Johnny Lee Miller. Shimizu says their relationship continued for quite some time, even while Jolie was with other people, but that it was definitely over by 2005. When asked in 2003 if she was bisexual, Jolie said, “Of course. If I fell in love with a woman tomorrow, would I feel that it’s okay to want to kiss and touch her? If I fell in love with her? Absolutely, yes!” 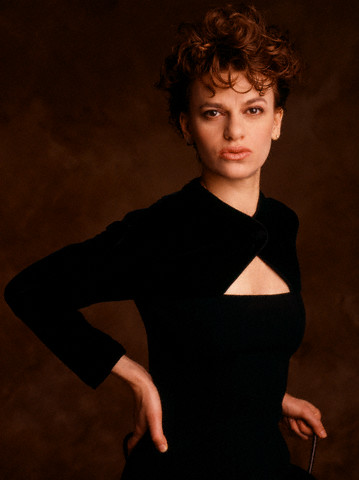 Sandra Bernhard has never been shy about who she is. This includes her legendary appearance on The David Letterman Show in 1988 with Madonna, during which the pair alluded to their sexual relationship, and Bernhard “joked” that Madonna is better than Sean Penn in bed. A 1993 Newsweek article refers to Bernhard as an “avowed bisexual.’ In a 2013 interview with Between The Lines, Bernhard said, “I’ve never really come out. That’s never been my thing. I never made a definite statement about my sexuality. Obviously, I’m the torchbearer for people just to be comfortable in their own skin, and that’s what my whole philosophy has always been. I never needed to come out, because I came out as a person with many different facets to her personality since the beginning of my career. And that’s what I stand for.” 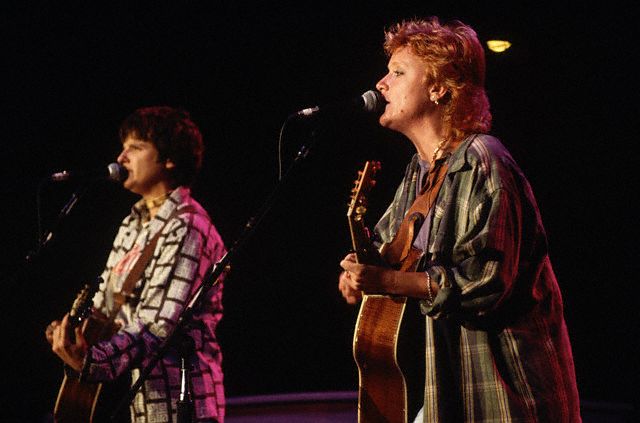 Nobody was surprised but everybody was appreciative when Amy Ray and Emily Saliers came out in an April 1994 issue of OUT Magazine, right before releasing their hit album Swamp Ophelia. “Here’s something you probably already know,” wrote The Advocate. “The Indigo Girls — Amy Ray and Emily Saliers — are lesbians…. the girls’ publicist tells us they feel ‘beautiful’ after finally unburdening themselves. Beautiful, yes, and a whole lot closer to fine, we bet.” Real talk: they remain my favorite musical situation of all time. SORRY I CAN’T HELP IT. OLD HABITS DIE HARD. For the record, The Indigo Girls were my first lesbians. Having a lesbian Mom in 1994 meant our CD rack was a flaming homosexual. 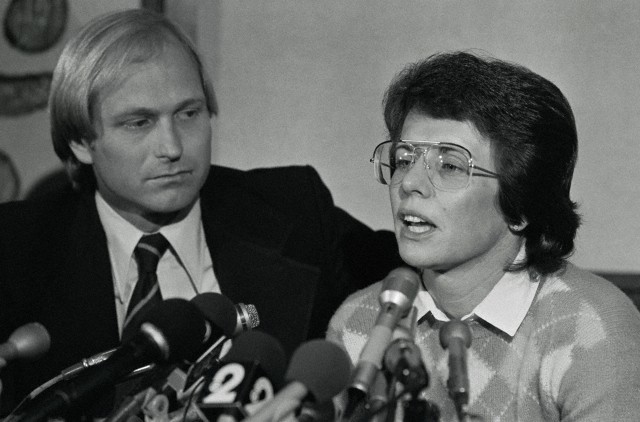 Original caption: “Tennis star Billie Jean King answers questions at a press conference here, in which she admitted that she carried on a homosexual relationship several years ago. The admission came as a result of allegations by Marilyn Barnett, a former hairdresser who claims she and Mrs. King were lovers. The suit says the former tennis star had promised to give Miss Barnett a Malibu, California, beach home.” (Image by © Bettmann/CORBIS)

Billie Jean married attorney Larry King in 1965, realized she liked women in 1968, and had an abortion in 1971, believing that her marriage wasn’t solid enough to bring a child into it. Also in 1971, Billie Jean fell in love with her secretary, Marilyn Barnett. In 1981, Barnett filed a “palimony” lawsuit against Billie Jean, which resulted in Billie Jean being outed, becoming the first prominent professional lesbian athlete — and losing $2 million in endorsements and contracts. “I was outed and I think you have to do it in your own time,” King told The Sunday Times. “Fifty percent of gay people know who they are by the age of 13, I was in the other 50%. I would never have married Larry if I’d known. I would never have done that to him. I was totally in love with Larry when I was 21.” She also spoke about growing up in a homphobic family, suppressing her feelings through eating disorders, and struggling to be honest with her family. “I couldn’t get a closet deep enough. I’ve got a homophobic family, a tour that will die if I come out, the world is homophobic and, yeah, I was homophobic… At the age of 51, I was finally able to talk about it properly with my parents and no longer did I have to measure my words with them. That was a turning point for me as it meant I didn’t have regrets any more.” Now 71, Billie Jean lives with her life partner, 58-year-old tennis player Ilana Kloss.

Although the survey (perhaps not clearly enough) intended to ask about the first lesbian or bisexual female celebrity you were aware of, Elton John — a gay man — was such a popular answer that it seemed worth including. 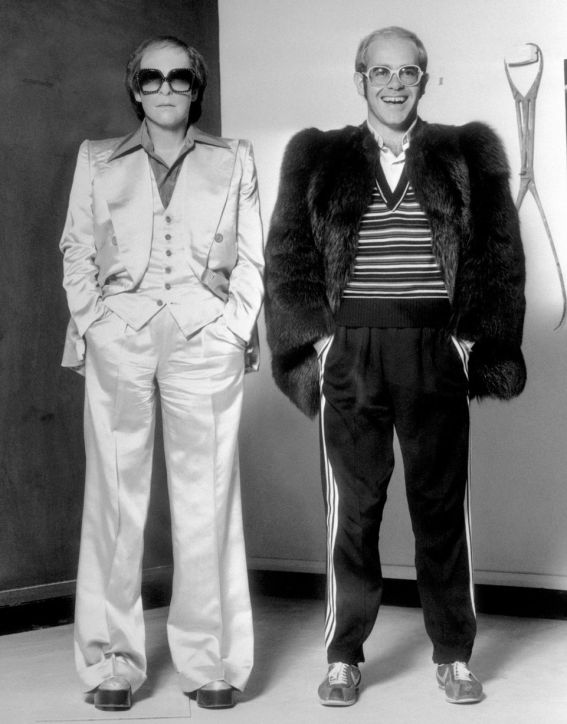 Elton John with his wax figure, 1976, via The Mirror

After divorcing from his wife of four years in 1988, Elton John told Rolling Stone that he was “comfortable” being gay. In 1976,  he’d told the same magazine that he was bisexual. He and his partner, filmmaker David Furnish, were one of the first couples to form a civil partnership after England’s Civil Partnership Act went into effect in 2005.  They legally married in December 2014, and have two sons. 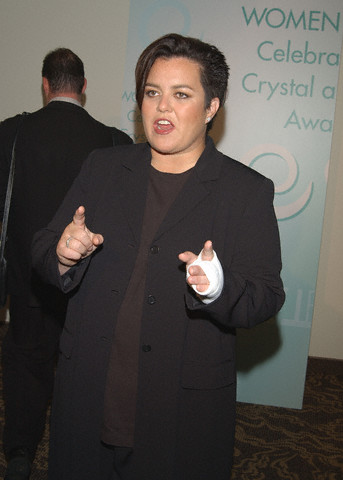 Rosie O’Donnell thanked her then-partner Kelli with an “I love you, Kelli!” in her 2001 Daytime Emmys speech, but she came out officially at a Ovarian Cancer Research benefit in 2002, announcing, “I’m a dyke!” She was two months way from finishing her enormously popular afternoon talk show, The Rosie O’Donnell Show and wanted to be able to speak freely about her personal stake in gay adoption issues happening at the time. She went on Diane Sawyer to do just that six weeks after the comedy club. She cut her hair shortly thereafter and it was the alternative lifestyle haircut heard ’round the world. 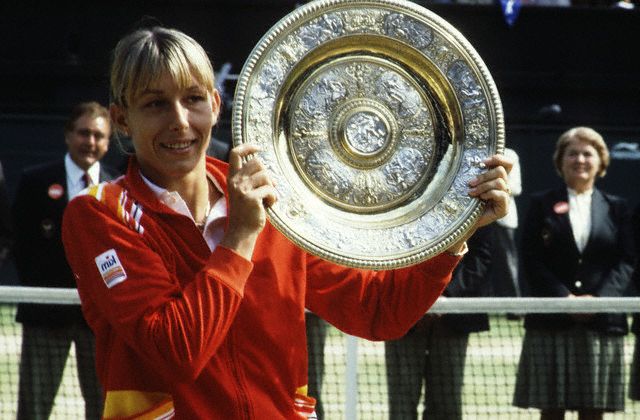 Although she later identified as a lesbian, tennis legend Martina Navratilova had just become a United States citizen when she told a New York Daily News reporter in 1981 that she was bisexual. She also told him she’d dated Rubyfruit Jungle author Rita Mae Brown, but asked him to hold the article ’til she was ready to come out. He published it without her go-ahead. Consequently, Navratilova and her girlfriend Nancy Lieberman gave an interview to The Dallas Morning News in which Navritilova affirmed that she was bisexual, that she and Nancy were in a relationship, and that Nancy still identified as straight. Navratilova’s next relationship, a six-year situation with Judy Nelson, ended in a very public legal battle. Navratilova married her current wife, Julia Lemigova, in 2014. She is considered by many to be the best tennis player ever. 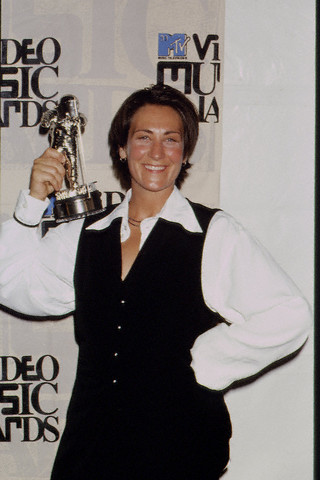 k.d. Lang came out in The Advocate in June 1992. “As bold as k.d. lang is, the Grammy-winning singer was clearly nervous about coming out in the June 16, 1992 issue of The Advocate,” the magazine reflected in 2012, “you can’t blame her — the AIDS crisis was raging, there was a Bush in office, and LGBT celebrities were mostly nonexistent. With equal amounts of determination and trepidation, lang became one of the first celebrities to crack open the closet door, laying a blueprint for Melissa, Ellen, and Neil.” She expressed nervousness about not wanting to hurt her connection to gay culture but also not wanting to hurt her mother. In 1993, she appeared on the cover of Vanity Fair with Cindy Crawford. The iconic photograph by Herb Ritts featured Lang in a barber chair and Crawford, in a tiny black thing, appearing to shave Lang’s face. Lang told the magazine that coming out hadn’t negatively impacted her career. 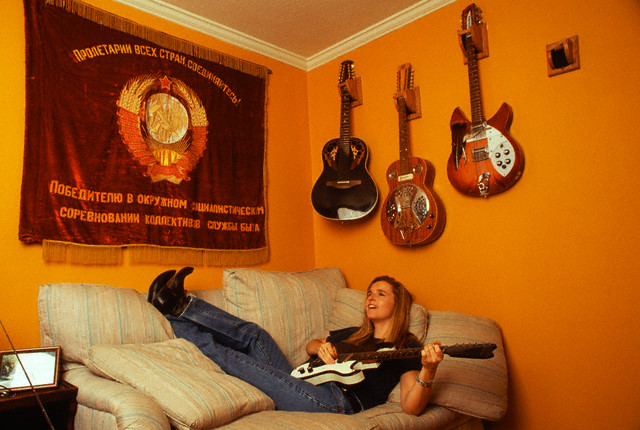 Although Melissa Etheridge was openly gay in her personal life, she didn’t come out publicly until 1993, when she was 32, referring to herself as a “proud lesbian” at a gay inaugural bash for Bill Clinton. A year later she appeared in People magazine with her “live-in lover,” Julie Cypher. Cypher was married to Lou Diamond Phillips when they met (on the set of the “Bring Me Some Water” video, Cypher was the assistant director) but she found herself drawn to Etheridge, having never considered before that she might be a lesbian. They were together until 2000, during which time Cypher birthed two children. David Crosby was the sperm donor. Etheridge went on to date and eventually marry and have more children with actress Tammy Lynn Michaels — they started dating in 2002 and separated in 2010 — and is presently married to actress/producer Linda Wallem. 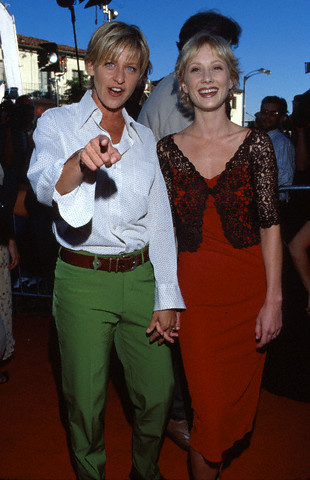 A full 56% of you cited Ellen DeGeneres as the first lesbian celebrity you were aware of. Ellen DeGeneres came out publicly on The Oprah Winfrey Show in February 1997, in anticipation of her sitcom character, Ellen Morgan, coming out. She said shortly thereafter to Entertainment Weekly, “If I do it right, I’m gonna have a career that will grow, and I’ll look back on this as my infancy stage. I don’t believe you have one moment. You have many moments.” It ended up being more like her infamy stage, because America was clearly not ready for a lesbian celebrity like Ellen. But she was right about the moments. She came back, she had many moments, and now she is bigger than ever. Ellen married actress Portia De Rossi in 2008.