Though trans people are enjoying a significant rise in visibility in many spheres, finding any movie with a trans actress playing a trans woman feels like cause for celebration. When it happens to be the lead role in a romantic comedy, it become a ground-breaking moment for trans media representation. Add some beautiful queer chemistry, a little heartbreak, and a happy ending, and you’ve got Boy Meets Girl, a new indie film from writer/director Eric Schaeffer that I recently had the opportunity to screen.

The film centers around Ricky (played by newcomer Michelle Hendley), a gorgeous and whip-smart 20-something trans woman, and her straight-guy best friend Robby (played by Michael Welch of Twilight fame). Ricky is frustrated by the lack of acceptable men to date, and dreams of a life as a fashion designer in NY. She develops an attraction to her new friend Francesca (played by Alexandra Turshen), a 20-something cis girl from an influential local family who is engaged to her Marine boyfriend serving in Afghanistan. As Ricky and Francesca’s friendship blooms, her fiancé grows increasingly hostile and hateful towards Ricky. As the two young women spend more and more time together, Francesca eventually admits her own attraction to Ricky, which eventually lands them in bed together. Their budding relationship forces Francesca to deal with her fiancé’s bigoted views, and Robby to deal with his long-hidden feelings for Ricky. As emotions run high, secrets are revealed and all the characters must decide how best to move forward, and which relationships to hold on to. 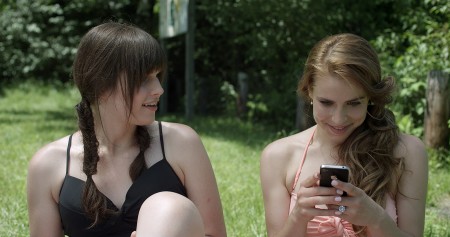 Boy Meets Girl certainly isn’t perfect, but it would do the film a tremendous disservice to focus on the missteps when there are so many things to love about this movie. As I said, simply having a lead trans character who is portrayed by a trans person is really reason enough to be excited. But, perhaps even more importantly, Ricky is portrayed as both attractive and desirable without being fetishized or exploited. Ricky is sweet and smart and quirky and cute, and I dare you all not to have a crush on her by the end of the film. She’s also a whole person, with feelings and dreams and heartbreaks and desires all her own that don’t necessarily have anything to do with being trans. While she is feminine, she’s far the hyper-femme stereotypes, with a definite tomboy spirit. She’s perhaps one of the most nuanced, least stereotypical trans characters that has ever been portrayed in film. Schaeffer also completely avoids one of the most obnoxious of trans tropes: focusing on the transition/transformation aspect. We never hear her dead-name, there are no discussions about when she decided to transition, and even the flashbacks show Ricky as a girl. It’s a script that consistently validates her female identity, and portrays her the with same care and respect that’s given to cis characters. If only that weren’t such a revolutionary act.

While Schaeffer’s writing sets a great tone, it’s absolutely the acting that pushes Boy Meets Girl to the next level. Michelle Hendley absolutely shines in this film. She’s charming and instantly likable when the film opens on Ricky working her barista job, bantering first with Robby and then Francesca. Hendley perfectly portrays the strength of a long-out trans girl enduring transphobia and a backwards hometown, but also the vulnerability of someone in love for the first time. If there’s any justice in the film world, she will be the break-out star of the next few years. Alexandra Turshen also deserves mention for her outstanding performance. It would be easy for a rich debutante to come off as irritating, entitled or ignorant, but Turshen manages to make Francesca simply kind, friendly, and a little naive. Even in her momentary fuck-ups, you still can’t help but root for her to end up with Ricky. Hendley and Turshen also have fantastic chemistry with one another, and from early in the film, the sexual tension between them is palpable. When that tension is finally broken, the result is both rather steamy, and wonderfully heartwarming, with probably the best cis/trans queer lady sex scene that’s made it to film outside of porn. 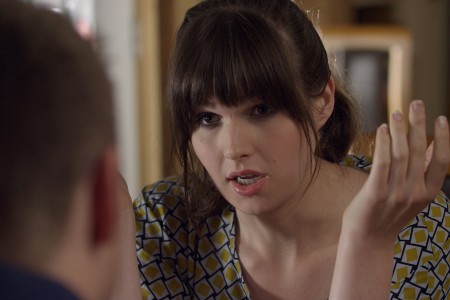 The film isn’t totally without flaws, but they don’t take away significantly from its enjoyability. Perhaps the biggest issue has to do with how the film handles sex. While no actual sex is directly portrayed (it’s not porn, after all), the dialogue very heavily hints that Ricky is a top (that is, she penetrates people with her girl parts). While top trans girls do exist, they’re not exactly super common. And, given that Ricky was supposed to have started hormones as a teenager, it’s not super likely she’d be able to do that. Also, the horrific transmisogyny (along with some racism) spouted by Francesca’s Marine fiancé is difficult to stomach against the backdrop of a film with such a sweet nature. It’s a very jarring change in tone, could be triggery for some trans viewers. That, in turn, also makes his later change of heart somewhat difficult to believe, and it comes off a little hollow. Lastly, Ricky is the only trans character in the film. In the real world, trans folks very rarely exist in complete isolation, but that’s functionally the only way we’re portrayed in film and TV. Ricky being from a small town makes this somewhat forgivable, though. Again, these are relatively small flaws, and even all together, they do not detract from the movie. But, if Schaeffer had engaged a few trans people when he wrote the script, they might have been avoided all together.

In a year where cis people are still frequently cast in trans roles, Boy Meets Girl is an amazing of example of the transformational power of a trans woman as a lead actress. While the film certainly deals has some queer and trans themes, the story and characters should be approachable for a mainstream straight, cisgender audience, potentially providing a much needed portrayal of trans women as worthy of attraction, affection, and love. It’s a romantic comedy that’s actually both genuinely romantic, and genuinely funny. Michelle Hendley’s outstanding performance should catapult her into the spotlight, and hopefully we’ll be seeing a lot more of her in the future.

Boy Meets Girl continues to screen in limited release, and will be release to DVD and streaming services on April 28th. In the meantime, you can watch the full-length trailer.