Ricky Martin shot through the closet door yesterday hot-dog-in-a-hallway style (the closet door has expanded an estimated 175% since 2008) following years of speculation, an allegedly career-tarnishing interview with Barbara Walters and several years of suspicious photographs featuring Martin in a Speedo on the beach with another hot guy. Everyone knows that two hot guys together in Speedos quickly becomes two hot guys together sans Speedos.

The world responded to Ricky Martin’s revelation with a collectively snarky “obvs.” But despite our complete and total awareness of Martin’s homosexuality, he seemed like the kind of guy that just might never come out. But does that “kind of guy” (or gal) even exist anymore or is it just a matter of time for everyone these days? Whether the celeb was outed by someone else, comes out to support gay rights or an upcoming memoir or was never closeted at all — the gayspores are multiplying. Fast!

Is there a formula? I asked our trusty design director, A;ex, to help me look for answers in the only place answers are ever truly found — infographics! 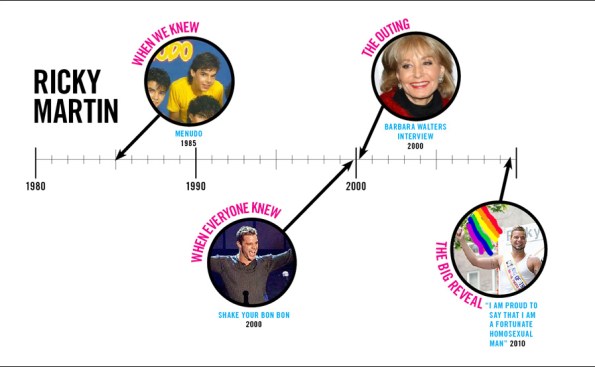 +
All the joking about Ricky Martin (and last month about Sean Hayes) does miss something. Firstly, who are we to question why Martin or Hayes took so long to come out — many of us did, too, and like Martin, many of us chose a more politically tolerant time to step forward. Secondly, think about how scary it was/is for you to imagine coming out to just your facebook network, let alone millions of human beings who are poised to have opinions about you. Yes, it was obvious. Yes, we all knew. But closeting isn’t always about self-loathing or hypocrisy or sinister, selfish agendas (as perhaps Perez Hilton must say it is in order to sleep at night); it’s about naked, tentative fear. The longer a secret lasts, the bigger and scarier it becomes. And for many young stars with thriving careers who prompt our are-they-or-aren’t-they convos (Ellen Page, Kelly Clarkson, Zachary Quinto, Kanye West); why risk a bump in their career path if they don’t have to? 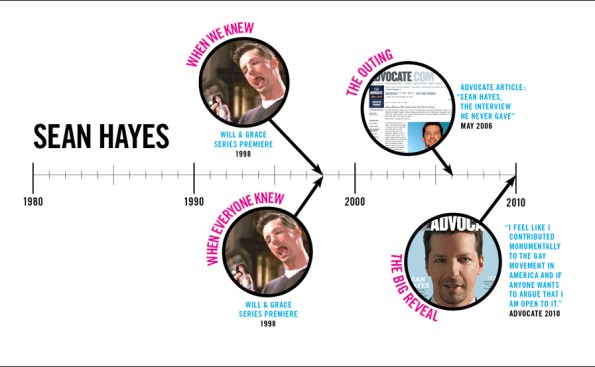 +
Back in the good old days, the “writing about your secret gay life” thang was reserved for a celebrity’s post-mortem biographer, as it was for stars like Raymond Burr, Greta Garbo, Merv Griffin, James Dean, Marlene Dietrich, and Robert Reed. Most gay actors & actresses lived and died in the closet, and being “out” from the get-go was almost unheard of. But now celebrities are taking the biography into their own hands. Typically composed a good 5-10 years after the actor’s career has peaked, this coordination is crucial for both artistic (“i must reveal my truths”) and marketing (“i must sell many copies”) reasons.

Like Meredith Baxter (who came out in ’09), Ricky Martin‘s “coming out” precedes the upcoming release of his memoir, in which he’ll likely talk about all those years of covert man-on-man lovin’. We’re hoping his homosexy activities began in the Menudo days as that’d be totally loca and stuff. Lance Bass came out in 2006, months before the release of his memoir which detailed all the relationships he’d kept a secret.

However, as our infographic demonstrates, I personally heard from a  confirmed source in 2000 that Lance Bass was way homo. Although Bass himself was dating TOPANGA FROM BOY MEETS WORLD, even Bass’s bandmates have said they had suspected his homosexuality for far before he spoke openly about it to them or dated boys. 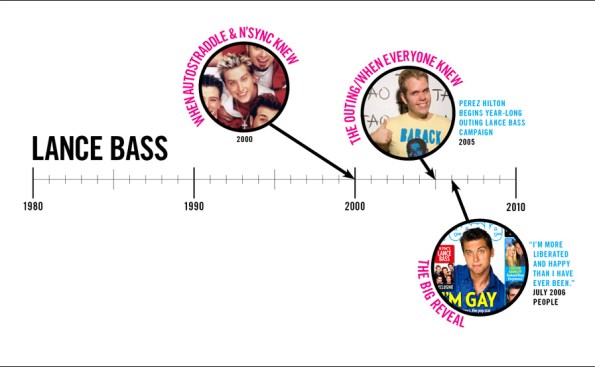 Doing it For the Cause

+
Wanda Sykes came out in 2008 because she wanted to be able to proudly show her support for marriage equality. Similarly, Rosie O’Donnell made her first television appearance as an out homo to talk about the gay adoption ban in Florida. Previously howevs Rosie had been dating Kelli Carpenter and in the 90’s dated bisexual musician Sophie B. Hawkins and has said she pretty much figured everyone knew.

Sometimes, though, coming out is just about timing. Although Rosie didn’t wait for a more politically tolerant time to come out, many others in her position have come out pretty much as soon as it was acceptable to do so, or when dating an already out celebrity, such as Portia De Rossi, Sarah Paulson, David Hyde Pierce, Tammy Lynn Michaels, Lily Tomlin, Lindsay Lohan and Jane Velez-Mitchell. 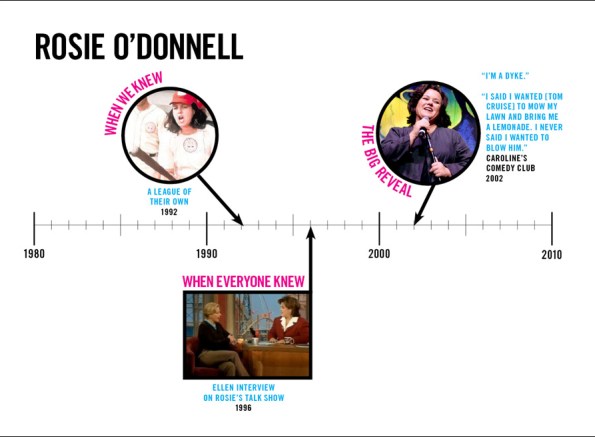