We are truly living in a miraculous era of all-ages entertainment.

Last night the animated show Steven Universe, which, although it’s one of the best shows on TV and it has fans of all ages, is definitely aimed at children, aired its Season One finale. In doing so, it also happened to air one of the queerest episodes of a children’s cartoon in the history of television.

Representation is vitally important for children. Study after study and expert after expert says that when kids see people like them positively portrayed in the media they consume, they are positively impacted, and when they don’t see that same representation, it negatively affects not only them, but how others view and treat people like them. Especially when we’re still developing, and especially when we are still discovering and exploring our genders and sexuality, it’s important for us to know that we’re not alone and that we have the possibility of a bright future. One way to do this is by creating fictional characters and narratives that show that bright future for people like that.

This is from an episode that is entirely about how much Pearl loves Rose Quartz and is proud of the special relationship they had.

That’s exactly what shows like Steven Universe are doing. The basic background and premise of the show already do a good job of this. Steven Universe is created by Rebecca Sugar, making it Cartoon Network’s first show solely created by a woman. The cast, both in the show and behind the scenes is filled with people of color, and especially women of color. Other than Steven himself, the three main characters — Crystal Gems named Garnet, Amethyst and Pearl — are all voiced by women of color, and it’s extremely easy to interpret the gems, as well as their fusions, as people of color. Then there are humans who fill the community, like the Pizza family and Steven’s best friend and crush, Connie Maheswaran.

As for the premise of the show, it’s basically the story of a boy being raised by three moms. This boy looks up to those three moms, and wants to be like them. He has no qualms about having feminine role models and heroes. I’m reluctant to say “female role models” as the Gems don’t exactly subscribe to the idea of human sexes, but they use “she” pronouns and largely present as women. It really is refreshing to see a TV show about a young boy who so unabashedly looks up women like this. In one episode where Steven finds out that Pearl and Amethyst have the ability to fuse together into a giant Gem, he even sings a song saying “but if it were me, I’d really want to be a Giant Woman.” The rest of the show is filled with other moments that both reject gender norms and are filled with queer subtext. Amethyst, Pearl, Garnet and Steven’s mother who had to give up her physical form in order for Steven to be born, Rose Quartz seem to constantly be battling to see who can have the gayest moment with one another.

Things took a turn for the queerer in the episode “Alone Together.” Steven and Connie are hanging out on the beach when they decide to dance together. Dancing is how the Gems fuse with one another, and possibly because he’s half human, when Steven dances with Connie, he fuses with her into a thin-waisted and wide-hipped, long-haired, short-shorts and crop top-wearing person named Stevonnie. Stevonnie goes around town and, although Stevonnie is (according to the people who make the show, Stevonnie doesn’t use either “he” or “she” pronouns) somewhat androgynous, is fairly clearly coded and read by the other characters as female. Throughout the episode Stevonnie is flirted with and admired by both girls and boys.

This concept of the Gems fusing reached critical mass in last night’s two-part episode, especially in the episode “Jail Break.” A group of other Gems, led by Jasper, was invading the Earth, and in attempting to defend it, Garnet and the other gems were captured and imprisoned on the Gem spaceship. There, Garnet was separated into two Gems, Ruby and Sapphire. This is the first time we see them apart. Up until now, the assumption had been that Garnet was a single Gem like Pearl and Amethyst. However, the truth is much more romantic.

When Ruby and Sapphire are finally reunited, they run up to each other and embrace. As Ruby cries tears of joy, Sapphire asks “Did they hurt you?” and when Ruby says “Who cares?” she emphatically replies “I do!” Sapphire then kisses Ruby’s forehead and nose as the two embrace again, Ruby lifting and spinning Sapphire until they become one again. Garnet is then so overjoyed that she sings a song (she is voiced by the singer Estelle, after all) that celebrates their relationship and how they’re not single and how when they’re together they can do anything.

When we talk poetically about marriage, we say that two become one. When we say that soul mates find each other, we say that it’s like two parts making one whole. This is what’s we were witnessing here. You would be hard pressed to take a look at the smiles on Ruby and Sapphire’s faces and say that they are anything but smiles of love. Then, last night on Tumblr, Joe Johnston, one of the writers and storyboard artists for Steven Universe received the question, “are you allowed to tell us is Sapphire and Ruby’s love is romantic or more platonic?” He answered with a very succinct “Romantic yo.”

Just like my heart, and the hearts of everyone else watching, Twitter and Tumblr absolutely exploded after last night’s episode. Artists and queer people, seeing a medium they love show people like them, leapt at the chance to say how much it meant to them. It was really quite beautiful. All of these people, just dying to see familiar stories and familiar faces in the media that they consume and love, and finally that waiting paid off.

With “Jail Break,” Steven Universe joins the ranks of cartoons aimed at younger audiences made by Nickelodeon and Cartoon Network that feature queer characters. First came Adventure Time, a show that already featured a lot of great female role models before the episode “What Was Missing” aired. It was then, way back in 2011 that Marceline the Vampire Queen and Princess Bubblegum took the leap into the world of romantic subtext. The subtext was made thicker by several later episodes and comic books, and then the relationship between the two was confirmed by Marceline’s voice actress.

Following that, many thought that the floodgates would open. As I’m sure we all know, that’s not how it happened. We got a peek of representation when, in December, 2014, the Cartoon Network show Clarence showed that one of the main characters, Jeff, has two moms, voiced very fittingly by Tig Notaro and Lea Delaria. Then, a few weeks later, Nickelodeon took what many saw as the biggest step yet. 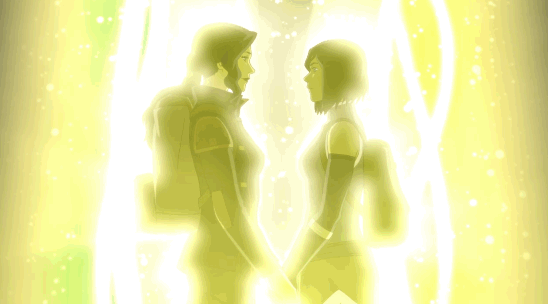 In the finale of their series The Legend of Korra, the hero of the story, Korra, and another female character, Asami, walk of metaphorically into the sunset and literally into a spirit portal, hand in hand. These two characters’s relationship was built up over the entire series and they pretty much did everything but kiss or say “I love you.” In a similar move to Marceline and Bubblegum in Adventure Time, their relationship was confirmed off air. The show’s creators and head writers took to tumblr to declare that Korra and Asami, two women of color, were indeed bisexual and were definitely a couple. While this move was terrific and rightfully celebrated by many, it did take place in the series finale and their relationship was therefore, unable to be explored or shown further.

That’s the beautiful thing about Steven Universe, all of this happened in just the first season. Season Two starts today. We have a whole series ahead of us and there’s limitless potential for how much they can expand on Ruby and Sapphire’s relationship (or any other queer parts of the show) in the future. If the show’s creators are willing to do this much in the first season, one can only imagine what is yet to come. 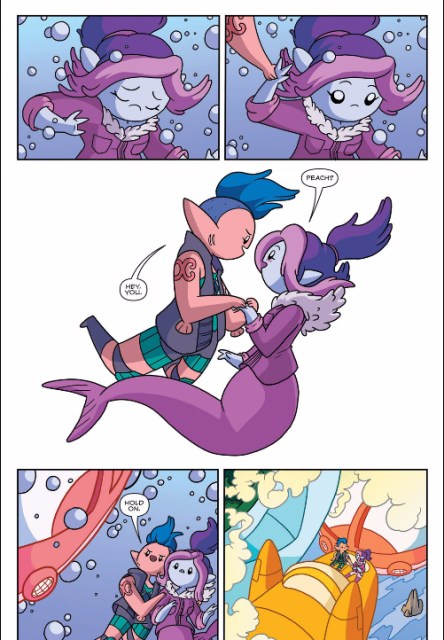 This movement of queer representation in all-ages media isn’t just limited to cartoons, either. Comic books like Bravest Warriors, Lumberjanes and Help Us! Brave Warrior, all from Boom! Studios (are they killing it or what?), have casts with queer characters, and are all meant for audiences of any age, including kids who are first discovering that they’re trans, lesbian, gay or otherwise queer. Can you even imagine what it would be like to be a closeted 12-year-old trans girl or lesbian or both, and to read one of these books? To see Mal and Molly going on a date and holding hands, to see Peach and Plum exchanging phone numbers, to see Leo be both a trans woman and proud and powerful warrior. These comics and shows are literally changing and saving lives.

We’re witnessing a magical new time in all-ages entertainment, and we’ll be reaping the benefits for years to come. There will be countless young people, and also plenty of not-so-young people who get the courage to find themselves, to be themselves and to come out and live their lives to the fullest because of shows like Steven Universe. This episode was beautiful and important and based on what’s been happening over the last few years, it’s just the tip of the iceberg.