I am sorry that I said this a little while ago, when South African LGBTQ activists met with government leaders to talk about corrective rape, a widespread practice in that region:

I am sorry because things in South Africa have not improved since then. In fact,a recent update shows that the corrective rape problem there is growing, in both numbers and ferocity. This is all occurring in a nation where laws about gay people are a fantasy compared to ours – so it’s part of a heavy societal, and not legislative, backlash against the gay community – and the lesbian community in particular. And it’s an incredibly violent manifestation. The homophobia that’s being experienced is complex: other regions in Africa have had more widespread movements against the gay community, and they appear to be a big influence on this one.

South Africa has a complicated history with respect to homophobia, and colonial rule brought about institutionalized homophobia in the form of laws and gay sex bans. This might be ancient history for the progressive laws of South Africa now, but it sets a tone for anti-gay violence and it is where it originated for the region. 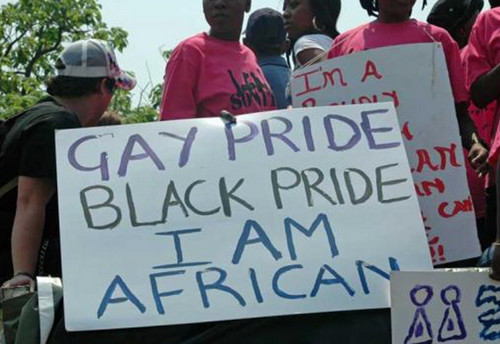 The stories are truly chilling. The contempt, and rage, felt toward the lesbian community in South Africa is pretty devastating:

In South Africa, more than 30 lesbians have been killed in “corrective rape” cases since 1998, yet only one case has resulted in a conviction. By some estimates, at least 10 lesbians are raped or assaulted every week in the Cape Town area alone. In one of the most notorious cases, a gang of men raped and murdered 31-year-old Eudy Simelane, a lesbian who played on South Africa’s national women’s soccer team. She was stabbed 25 times in the face, legs and chest.

According to survivors, the attackers often shout that they are “teaching a lesson” to their lesbian victims, or showing them “how to be a real woman.” Many victims never report the attacks to the police, fearing that they will be mocked or abused.

Even in schools, many young boys believe that lesbians need to be raped to “correct” their sexual orientation, according to the South African Human Rights Commission. “A culture of rape is being passed down to younger generations of South African men,” said a report by ActionAid, an international rights group. “Women are forced to conform to gender stereotypes or suffer the consequences.” […]

The South African courts and police have been slow to respond to the attacks on lesbians. One court case, involving the murder of 19-year-old Zoliswa Nkonyana by a gang of about 20 men who wanted to “correct” her sexuality, has been postponed 33 times and has dragged on for five years without a resolution.

One case has finally sparked global attention. Millicent Gaika, a 30-year-old lesbian in a township near Cape Town, was raped and beaten for five hours by a man who tried to strangle her with barbed wire. “I know you are a lesbian,” the man told her. “You are not a man. You think you are, but I am going to show you. You are a woman.”

These stories are a reminder, and are proof, that identifying corrective rape as a hate crime would be no understatement. And that’s exactly what the LGBTQ activists in South Africa are trying to do.

Ndumie Funda is leading the challenge against corrective rape, inspired to do so by the practice’s impact on her fiancee. She herself is in extreme danger, and has faced a brunt of verbal threats. When she formed a human rights organization, she was forced into hiding. But she has not stopped:

While the threat of violence and prison is forcing many African gays to go underground, the war is not over. In a few South African black townships, lesbian volunteers are going door-to-door to raise awareness of their issues. A growing coalition of rights groups is fighting against “corrective rape.” And after the global petition produced so many thousands of e-mails that the government pleaded for it to stop, Ms. Funda and other activists were granted a two-hour meeting with senior Justice Ministry officials on March 14.

The officials promised Ms. Funda that they would take action on the corrective-rape issue, including setting up a meeting with top police commanders. “The meeting was exciting,” she said. “It was great.”

I may have been too hopeful about that meeting, but I stand my ground that these activists are some of the most amazing women in the world. Corrective rape cannot continue, in any region of the world, and these activists have the fire to keep fighting. (All of my heart is with them.)