We sound like a leather jacket party at a dive bar attended by The Cramps, Dick Dale, The Shangri-La’s and The B52’s.  Rock’n’roll with a splash of surf, a shimmy of girl-group and a razor edge of zombie punk.

“Set You On Fire” is on our EP, V for Villendetta.  It’s also unofficially called “Jerk Song” ’cause it’s about a jerk who messed one of us around once.

Anna’s golden retriever Murphy is official Band Dog. He models all our merch for us. 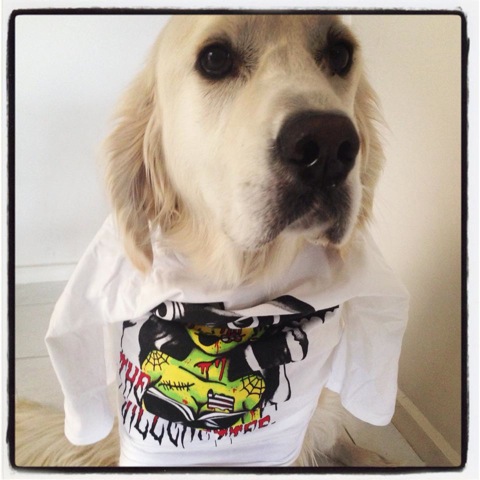 Clair: The first record I bought was Garbage Version 2.0 which I am very proud of and the last would be Savages’ Silence Yourself which has been on repeat ever since.

Kylie: The first album I bought was What’s the Story Morning Glory by Oasis. I thought I was very alternative. This was about the same time I tried to dye my hair green with food dye. The last record I bought was an EP by The Murlocs, a distorted-surf/rock band from Melbourne.

Clair: The best thing about touring is getting to play in different environments and generally being exposed to a different scene and new musicians. The worst thing would be four people sleeping in the back of a station wagon in a car park cuddling guitars and drums. But hey, what happens in the van stays in the van…

Kylie: Road trips are so much fun!  The best thing is playing to people who haven’t heard us before, and discovering new bands. The best/worst thing is the ever-escalating pranks. One time Jess woke up with an orange traffic cone in her bed. Then there was this other time Clair and Anna bought some rather interesting items from the discount bin at an adult store which ended up getting hidden amongst our gear everywhere. I was scared to unpack my guitar!   The absolute worst thing is having to get up early to drive 9 hours home after being out ’til 4am after a big gig.

Kylie: One of our newest songs is called “Psycho Nanna.”  I wrote the lyrics for a laugh after joking with my girlfriend’s mum about how I was unsure how my 91-year-old grandmother would react to me bringing a girl home for dinner.  Turns out she’s a champ, and despite being a little speechless when my parents first told her, is totally fine with it. Bless. But Jess came up with a killer riff and so now “Psycho Nanna” is actually a thing. Sorry Nanna!

Clair: My last job was a courier, which was horrible but on the plus side I got to listen to music all day. My favorite part of the day was listening to the local radio station and any time one of my bands would come on I would blast the volume and fist pump out the window, horribly arrogant I know but I needed something more exciting than my iced coffee ritual to get me through the day.

Kylie: I’m a tax lawyer. I studied law while I was on this track of doing what I thought I should do, without really sitting down and thinking what I wanted to do. I’ve realised that music is my passion and I’d love to be able to do it full-time, but I gotta live. It’s hard to sit in the office all day when I want to be home playing music, but I’m really lucky because I can afford to only work four days a week at the moment, and they are really good about letting me have time off to tour or whatever.

What is the best piece of advice you’ve received, in music or life?

Clair: I have struggled a bit with stage anxiety were I start doubting myself and thinking negative thoughts while performing which is horrible, it doesn’t matter if i’m playing to three people or three thousand, it’s still there. When I was really struggling with it my sister said “Dude, you’re good. Stop being stupid. People can be asshats but at the end of the day you’re the person getting up there and doing what you love and they’re not. Just have fun and let yourself go.”  Maybe a little harsh, but it was what I needed. So now anytime I start to doubt myself I look at the rest of my band and remember how lucky I am to be playing with my best friends and I just stop caring so much.

Kylie: If I had to choose only one? Revolver by The Beatles. It’s my favourite Beatles album. I am a huge fan and pretty much learnt to play bass by playing all of Paul McCartney’s bass lines. I would probably die if I ever met him. Jess and I saw Ringo Starr tour earlier in the year, which was cool. But DAMMIT PAUL COME TO AUSTRALIA PLEASE.

Who is your idol, musical or otherwise?

Clair: Beth Ditto from Gossip is my absolute idol. I recently read her autobiography Coal to Diamonds which really highlighted her personal struggles with sexuality and self-esteem issues. Her views on feminism and the role of female musicians is truly an inspiration to me. She addresses the media’s idealization of the female form with the attitude of we’re all just humans, and humans come in all different forms and they’re all beautiful. She currently runs a summer camp for young women which uses music to help them gain confidence, which is such a great initiative and one that I can really relate to as I started playing drums to help build my confidence.

The Villenettes will be playing the afterparty of this year’s Feast Pride Festival in Adelaide on November 24, and they’ll be at Luwow in Fitzroy in Melbourne on the weekend of January 17.  Check their website and Facebook for more information about upcoming shows.