There is perhaps no phenomena so inexplicable as “corrective rape.”

A common practice in South Africa, corrective rape is an act of violence where lesbians are raped in order to “fix” them, because, you know, if we haven’t met the right dude yet, maybe it’s just because the right one hasn’t raped us! (Same-sex marriage in South Africa has been legal since 2006, proving once again that marriage equality is unfortunately not synonymous with equal rights.) The practice was called out by human rights groups in 2009:

A report by the international NGO ActionAid, backed by the South African Human Rights Commission, said the horrific crimes against lesbians were going unrecognised by the state and unpunished by the legal system.

The report called for South Africa’s criminal justice system to recognise the rapes as hate crimes in an attempt to force police to take action over the rising tide of violence.

The ferocity of the attack became clear in April last year when Eudy Simelane, former star of South Africa’s national female football squad, became one of the victims. Miss Simelane, and equality rights campaigner and one of the first women to live openly as a lesbian, was gang-raped and brutally beaten before being stabbed 25 times in the face, chest and legs.

But scores more women have been deliberately targeted for rape, the Guardian reports.

Now, as charming as that sounds, it is clearly time to wave goodbye to that trend. Gay and lesbian activists lobbying in South Africa for corrective rape to be labeled a hate crime agree. They have been tireless in their efforts to not only spark conversation on the tragic practice of corrective rape, but to hear their government speak out against it with them.

In Cape Town, government officials have finally met with a group of those activists. This marks the first time the government has acknowledged the discussions surrounding corrective rape in the region.

The activists gathered outside of Parliament to spotlight the practice, and call out the perpetrators for targeting lesbian women based on their sexual orientation. Members of the group met with the Justice and Constitutional Development Minister (sounds fancy, right?) Jeff Radebe today – and they were ready. The activists’ demands were clear: for Radebe’s department to research, develop, and implement an action plan for the nation to tackle hate crimes and even other acts of homophobic violence.

Activists had circulated a petition calling him to take action; it was signed by over 170,000 people from 163 countries within 100 days. (The petition was one of the most popular / successful on change.org of all time.) 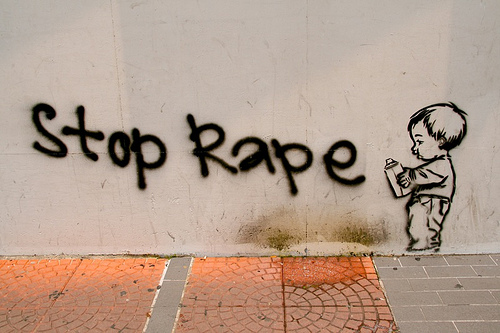