Hello and welcome to another edition of Autostraddle’s College Lesbianage: a glimpse of college life through the wide eyes of six freshly fallen snowflake first-year queers. This month’s update will be given individually! Today we’ve got Wellesley’s Claire with some thoughts on “queer privilege.”

I don’t know how to write about Wellesley right now without writing about the Boston Marathon. Wellesley is not known for our devotion to sports, but the marathon is very, very special to us. As much as Wellesley is tied to the marathon, though, Boston isn’t tied to us. Boston is Wellesley’s Best Friend Forever, but Boston is a little bit more lukewarm about Wellesley. We’re just one of many suburbs, 13 miles down the line, safely tucked away in our liberal arts college bubble. Except that almost all of us that had friends running, friends in town cheering, friends on their way to meet other friends at the finish line, relatives and lovers and more friends living in places that were in some way affected by the violence that occurred during the week of the Boston Marathon. 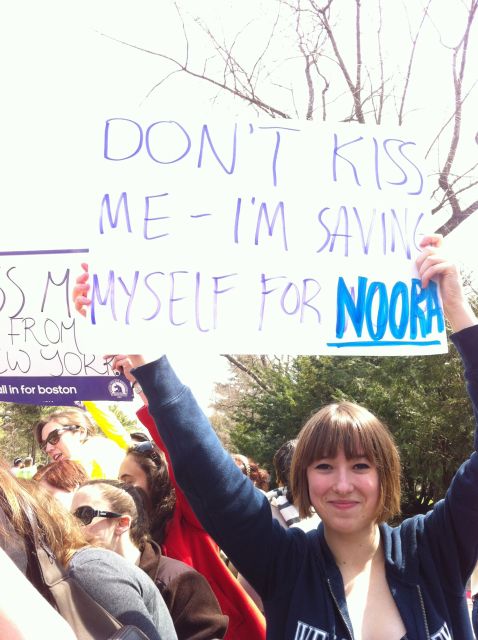 “We are safe.” It was our mantra from Monday to Saturday. Every Facebook update, every phone call with a frantic friend or family member, we repeated, “We are safe.”

“We are safe.” We are thirteen miles from the center of chaos, thirteen miles from tragedy. Thirteen miles: that’s huge to anyone on the East Coast, where the roads are cow paths traced with brick and getting from a suburb to the center of town takes at least an hour and careful planning. But for some of my family members, thirteen miles is the distance from them to their next-door neighbors. “We are safe.” We repeat this mantra on the phone sixteen times to different relatives. It becomes a litany. It becomes a line in a conversation we could have in our sleep, repeating our mantra, reassuring our family, and hearing their grief. Everyone feels the chaos; I don’t know of any other time I’ve heard my grandmother cry. We are exhausted, and have no emotions left to emote because we’ve been put through the wringer, but we squeeze five drops of empathy to comfort those half a continent away from tragedy. We are safe except that Boston is our lifeline, Boston is our best friend; Boston is our dot on the map.

Boston is in chaos, and “we are safe,” except that my girlfriend’s best friend is running the marathon and the pace she was setting when she passed us at the halfway point puts her in Copley at the worst possible moment. All I can do is hold my girlfriend and hope that her friend’s pace faltered. Her friend is safe: but it’s a few terrible hours before she’s back to campus.

“We are safe”, but the people who work at or commute to Wellesley are not, so the campus is shut down on Friday, leaving the rest of us to watch the news cycle like a washing machine, throwing theories like limp t-shirts around and around and around and around. The same five seconds of search footage flashes across the screen every two minutes and so we leave, we cuddle up in a different wing of a different dorm to watch G-rated movies and cry. We are safe but my friend is currently trying to get to a wedding in New York, and we’re not quite sure how we’re going to get her back to campus if she doesn’t make her flight out of this ghost town with all of the public transportation shut down. 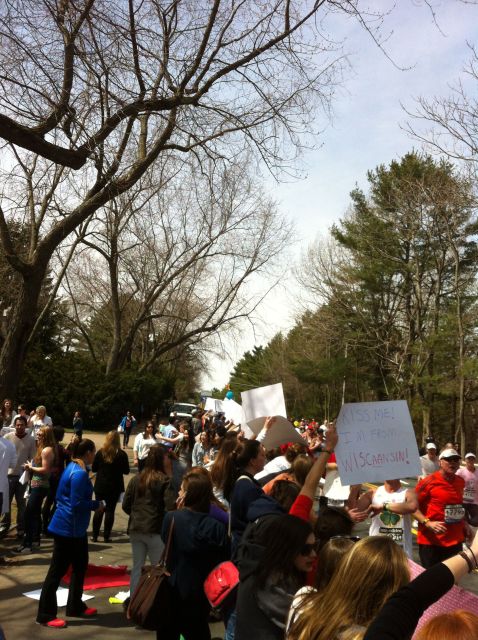 We are safe and when it ends, we don’t cheer. Some people posted “it’s over” to facebook and the people who still have the emotional capacity to react to the news thank various gods for our safety. We are safe but one of my best friends told me that this is the first time ze hasn’t felt invincible. I’ve never felt particularly invincible, but I get where ze is coming from.

Claire has written 4 articles for us.