Last weekend I had the distinct honor of representing Autostraddle Dot Com at the biennial Butch Voices conference in Oakland, CA. In case you missed my breathless preview article, Butch Voices strives to “enhance and sustain the well-being of all women, female-bodied and trans-identified individuals who are Masculine of Center by providing programs that build community, positive visibility and empower us to advocate for our whole selves inclusive of and beyond our gender identity and sexual orientation.”

Shepherding me through this tough-on-the-outside-soft-on-the-inside odyssey was Butch Voices board member Meg McEachin who, in addition to planning, organizing, and executing this entirely volunteer-run event AND fielding all of my pressing questions about lanyards, is also an Outreach Coordinator for Planned Parenthood of Greater Texas, which as I’m sure you can imagine has been a heckuva job lately. So let’s all take a moment to appreciate Meg, this is Meg: 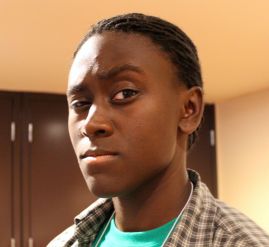 Meg told me that she got involved with Butch Voices after being blown away by FemmeCon in Baltimore last year (they switch off every year) and jumped at the chance to get on (the) board when a call was sent out last winter: “I didn’t know any gay people growing up, let alone people who self-identified as butch. There’s something about being in a space with so many people who have had the same experiences you have — AND who are willing to talk about it (with some prompting, usually) — that is just incredible,” Meg said in her butch voice. 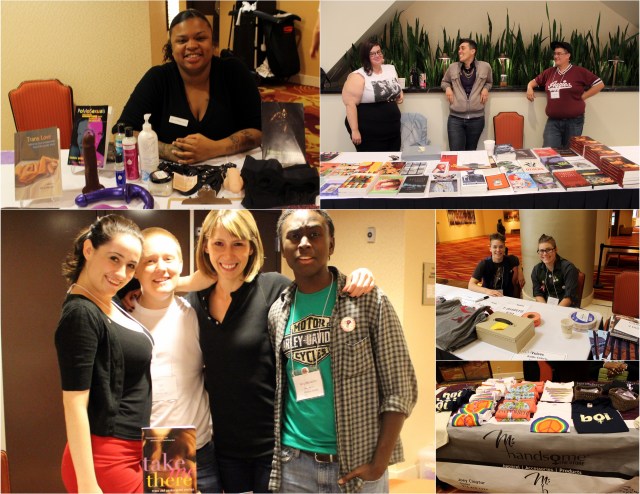 The conference offered two full days of workshops and panels led by facilitators of all stripes with a broad range of expertise. Here are a just a few examples of the programming that was on offer: 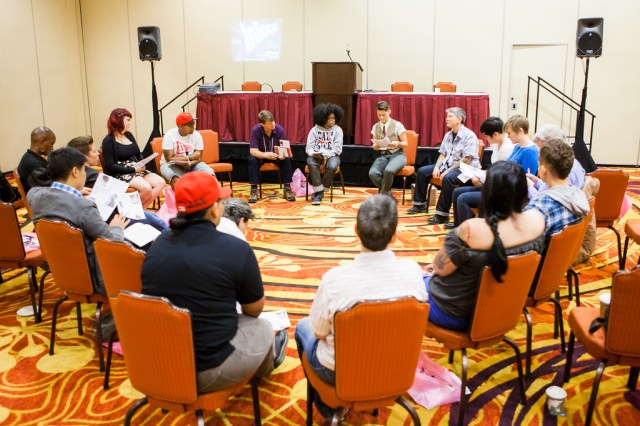 The conference’s evening program, Butch (K)nights — not the actual title but one of many that I’m hoping will gain some traction by the time the next conference rolls around — was definitely my jam. Things kicked off with an opening party at Club21 in Oakland, which I had never heard of despite living here for 3 years, and it’s apparently an institution! An institution with an outdoor smoking deck and dirt cheap drink prices, I might add.

Friday night was the short film festival “Butch Briefs” (I suggested “Boi Shorts” to Meg for next time and she nodded solemnly as the gravity of the missed titling opportunity slowly sunk in. It’s okay Meg, I’m here now.) Alongside “Performing Girl,” a short documentary by filmmaker Crescent Diamond profiling queer Sri Lankan performer and writer D-Lo, an episode of the Oakland-based webseries “Dyke Central,” and a cute short about a gender non-conforming high school teen called Genderfreak, we were also treated to the work of  Me And My Bois, a collective of MOC bois led by Lex Kennedy and Megan Benton using art to bring awareness and visibility to LGBTQ issues. And guess what: now they’re COMING TO A-CAMP! 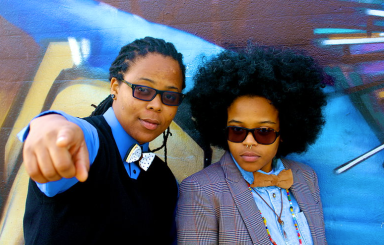 There’s something about being in a space with so many people who have had the same experiences you have that is just incredible.

Saturday night closed with the BUTCH Nation evening of performance, and errrrrbody got up on that stage and did a little number, including D-Lo, Tylan Greenstein of Girlyman, motherfucking Jay Toole (whose Friday keynote I very sadly had to miss but whose storytelling was awesome), and incredible Chicago-based spoken word artist Paradigm (check out Paradigm’s work), among others. 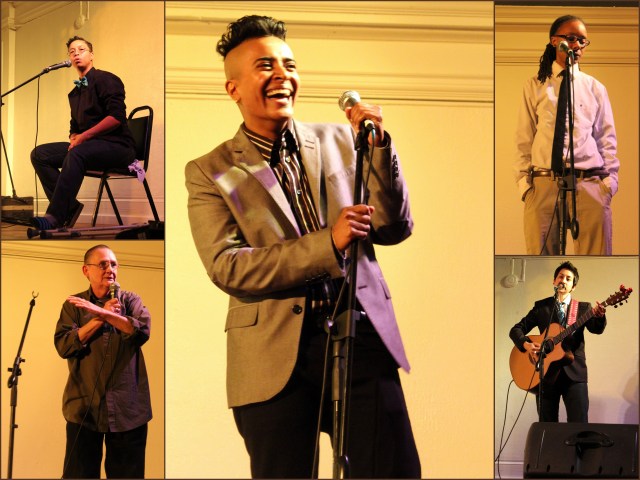 After the BUTCH Nation performance was the Saint Harridan gala—emcee’d by D-Lo because that dude is everywhere—featuring guest DJs, drinks, dancing, and very fancy suit models strutting around. If you haven’t had a chance to check out Saint Harridan, do; there are a few businesses that have popped up in the last few years offering custom tailored menswear to the MOC community, and Saint Harridan seems to be really getting it right. Their suits are made in the US, and they seem really devoted to giving their clientele a great experience. I didn’t have a chance to stop by their Pop-Up shop, but it was apparently a big success and will be hitting the road soon so keep an eye out. You can also follow their many exploits on Facebook. 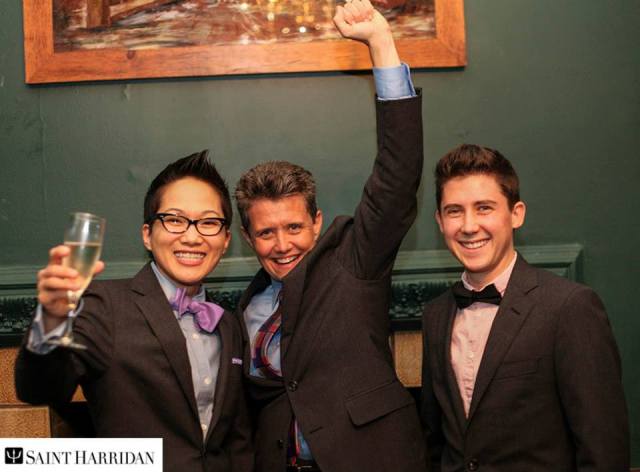 The conference was remarkably accessible and inclusive, and offered gender-neutral bathrooms and signage, sign language interpretation, all-accessible venues for all events, and a scent-aware policy that had Riese reading up on the deodorizing properties of baking soda out of fear of being asked to leave (she was not). Seriously, the sign language interpreters were so awesome.

D-Lo giving props to one of the interpreters

But one of the real highlights for me was Cherríe L. Moraga‘s keynote speech on Saturday. Moraga, as you may know, is a renowned feminist author, thinker, activist, poet, playwright, co-editor of the groundbreaking collection This Bridge Called My Back: Writings by Radical Women of Color, Stanford professor, and general living legend. You know, NBD.

Aside from it being profoundly humbling to be in a room with someone whose work I studied in university and whose contributions to the feminist movement are immeasurable, Moraga’s keynote was sobering and challenging in its reflection on the history of the feminist movement and the importance of that history in informing our understanding and critical consideration of the current discourses around the intersections of gender, sex, and identity.

I can’t do justice to her speech in a recap, so I’ll have to wait for the video and we can talk about it then. 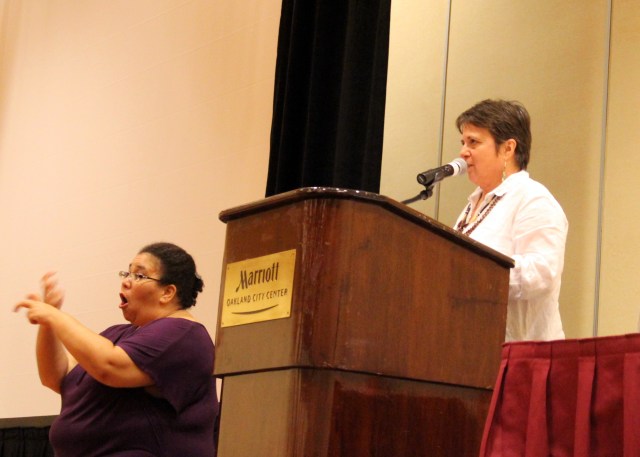 If Butch Voices seems like your kinda scene, they’re always looking for more volunteers and presenters to beef up their ranks and diversify their programming. “We want to become a year-round organization, not just a conference-presenting body,” Meg says butchly, “but for that, we need people willing to help.” 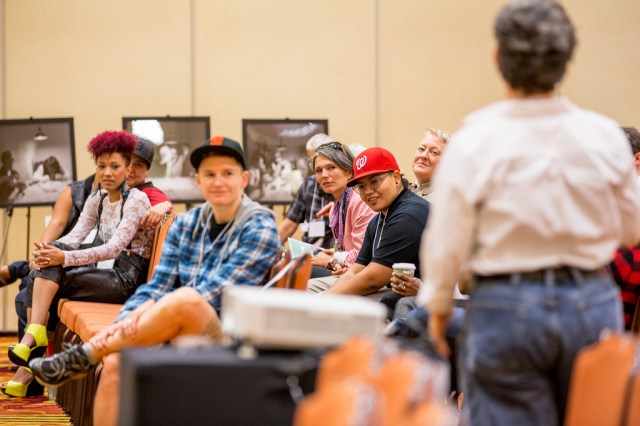 “Currently, we’re completely volunteer-run, and it is a LOT of work,” she continued, while pretending to nurse the fake wrist injury that she just so HAPPENED to have sustained immediately prior to the conference rendering her conveniently unable to follow through on our much-ballyhooed arm wrestling match (which I definitely would have lost, admittedly). “To continue doing the work that we do (and to improve at it), we need to find other passionate individuals who are willing to give us their all.”

Even if all you can give is a little, everything helps—you can donate to Butch Voices here. You can also check out more images from the weekend on their flickr stream, and follow them on facebook and twitter.

Butch on, friends. Butch on.