Last year, I visited Otakon, the East Coast’s largest anime convention, for the first time. I covered two panels there, about sexism in anime and fandom, and navigating LGBT representation in anime and fan culture.

This year was a different experience; I’ve watched more anime lately, and I spent way more time focused on anime-specific things this year – while the convention itself seemed to go further from its strictly Japanese focus, as there were even more people dressing as characters from or organizing meet-ups for Western geek properties. There were also less LGBT-focused panels this time around, though still plenty talking about women, and their representation. I ended up attending two panels related to this on Friday, a “Study in Heroines” talk focused on the magical girl series Revolutionary Girl Utena and Puella Magi Madoka Magica, and “Anime Amazons,” about what actually makes for a strong female character in anime and video games.

Again, I’ll make a disclaimer that I’m mostly reporting on what the panelists said with some of my own conclusions based on my own knowledge of the same media, but I’ll try not to make any sweeping assumptions about Japanese culture since I am a white, Western anime fan who doesn’t know a lot about it. And my article should be read with that clarification in mind. 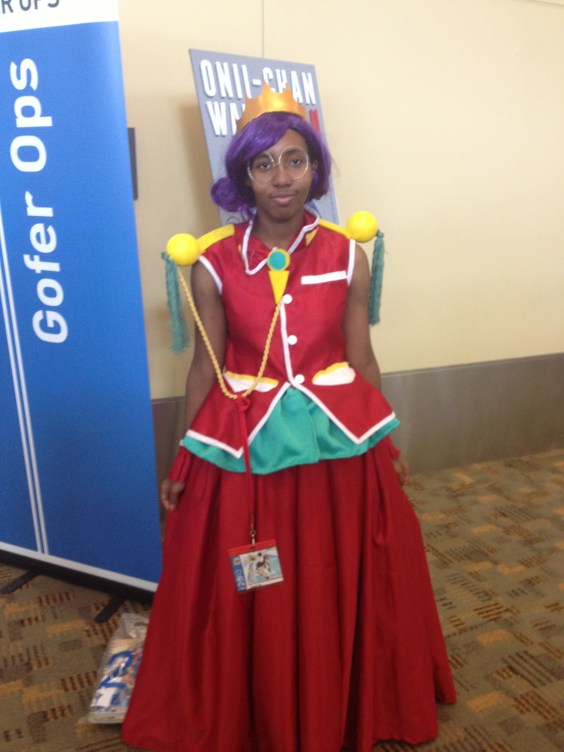 I was excited for this, since I adore Puella Magi Madoka Magica and am getting into Revolutionary Girl Utena (after many recommendations for it). Utena is one of the most influential and iconic shojo (anime aimed at teenage girls) series of all time, doing so much to both define and deconstruct its genre. Puella Magi Madoka Magica is a dark, subversive take on magical girl that’s one of the most popular anime of the last few years, which I discussed in my article on magical girls and feminism.

The panelist here was Katriel “Kit” Paige of Digital Flowerstorm, who does a variety of panels for conventions on Japanese culture, and she discussed issues of heroism and compassion in Utena and Madoka. The panel focused particularly on whether the heroines of Utena and Madoka Magica showed a different type of “heroism” from traditional male heroes.

Utena and Madoka may be major examples in the anime genre of female heroism, but they both subvert a lot of gender roles associated with it. For example, take the idea that men go for direct confrontation and women go for emotional manipulation. Both have confrontational female characters (like Madoka‘s Sayaka and Kyoko) and Utena has manipulative male characters such as Touga. Utena subverts gendered types of heroism in its very premise: Utena Tenjou is both a prince and a princess, who wants to save others and be saved. Yet, the bulk of Paige’s focus on how the shows play with gender roles was with their attitudes toward compassion and sacrifice. 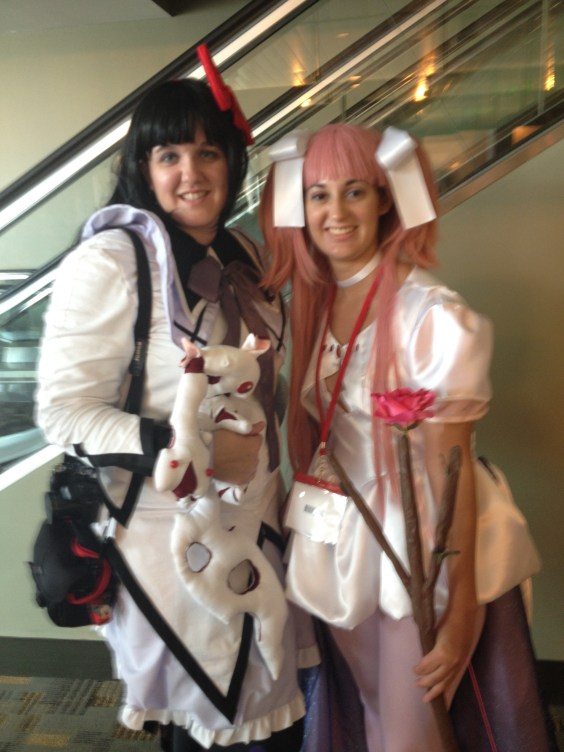 The difference in male and female heroines with regard to compassion is something that can be seen in a lot of magical girl series, when comparing them to boy-oriented series like those in the shonen (aimed at teenage boys) genre, which forms the plurality of popular anime series in the USA. While themes of self-sacrifice for others can be found in shonen (such as Fullmetal Alchemist), it’s a theme I’ve seen far more in stuff aimed at women and girls. There’s also much more of a sense of teamwork, rather than it all resting on one powerful hero(ine)’s shoulder, and of “defeating” people by being kind to them. (Princess Tutu, an iconic magical girl series I recently finished and loved, is a great example; the titular character cures those possessed by heart shards by dancing with them, and getting them to admit their true feelings. No “battle” necessary.)

Something Paige pointed out with regard to her two series is that they’re not as straightforward in their embrace of compassion as other works. There’s a repeated theme that compassion is good, but only to a point, and self-preservation is important, too. For example, in Madoka Magica, Homura’s strong investment in Madoka and continual time-resets to save her might temporarily make things better, but just keep delaying Madoka’s fate and, ultimately, worsen it. She’s paralyzed by her compassion, trapped in an endless loop. Sayaka, an even more altruistic character, is doomed to a sad fate in every timeline because she can’t separate her drive to save the world from her selfish desire to prove herself to her crush. Yet, at the end, it’s Homura’s and Sayaka’s compassion that cause Madoka to make her fateful wish that changes the system, and improves the state of magical girls by saving them from being turned into witches.

The point, Paige said, was that sacrifices had to mean something. One had to be fighting for something – not selfless – and to understand the consequences of their actions. Characters like Sayaka fail because she didn’t understand the consequences of her actions, and because toward the end, she was motivated by pure altruism, rather than toward any specific goal. Compassion is good, but it has its limits.

I thought one could apply this in a larger context in examining how these series’ approaches help feminism and better women. It’s easy for some to see a series that wholly praises compassion and self-sacrifice as a triumph for “feminine values” and therefore for feminism, while ignoring that those values’ emphasis for women has an anti-feminist purpose, too. Encouraging men to consider themselves first and keep going for their goals, while women are urged to sacrifice their ideals for others’ sake, reinforces patriarchal structures by making sure there are more men in positions of power. The fact that these series encourage women to think of themselves and not abandon their own desires, but still emphasize compassion as a virtue, means they uphold both female power and feminine-coded values. 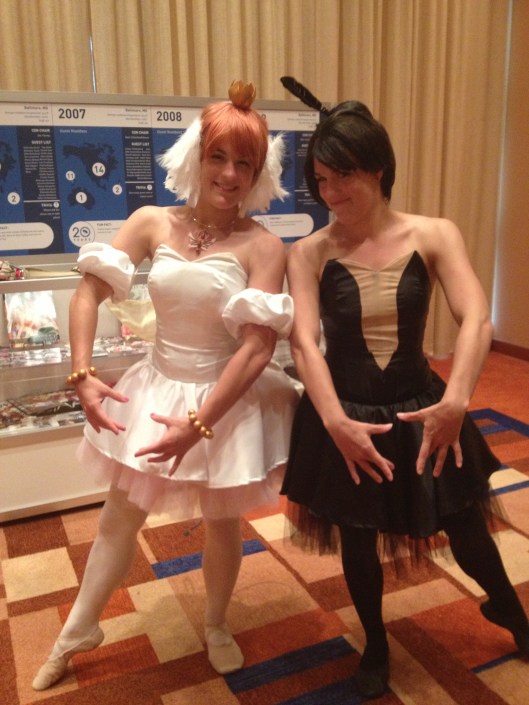 As Paige put it, overall these series emphasize the idea of having someone to look out for you: that you’re not alone, as per Madoka’s line at the end of Madoka Magica. This is again, something that can be seen in other series: Princess Tutu’s method of saving people is not by “fixing” their feelings but rather recognizing and processing them. The idea is that everyone has their issues and often the best thing to do is not to save them – something often motivated by a selfish desire for recognition – but to simply listen. And that’s a triumph of feminine-coded values, of emotional intuition rather than direct confrontation, that doesn’t involve women having to sacrifice anything.

There is so much to talk about with this panel and what it said about anime heroines, and how they save the world in their own ways. Of the two panels on female characters that I attended, it was the one less-focused on feminist analysis, yet there was still plenty of discussion in that vein to be had. For a more explicit approach to those issues, though, I only had to wait a few hours for another look at anime ladies and how they stacked up to the dudes around them.