As a kid, I obsessed over the likes of Sailor Moon, Pokemon and Digimon like everyone else my age. As a college student, revisiting my former Sailor Moon nostalgia and exploring some yuri (lesbian-themed) series helped me in coming to terms with my bisexuality and the idea of having a relationship with another girl.  Despite all this, I’ve never considered myself a big fan, or “otaku” (the Japanese term for huge fans of anime, manga and video games, which Western lovers of the medium have more than embraced). No matter how many hours I spend training and trading Pokemon on my Game Boy, no matter how many TV Tropes edits I’ve made on Puella Magi Madoka Magica or Fullmetal Alchemist, I’ve always been put off by some parts of the otaku (and larger, geek/nerd) subculture, particularly some of the parts that are less women and LGBT-friendly. But with my first convention visit last month, to Baltimore’s Otakon, I think my opinion of that is starting to change. 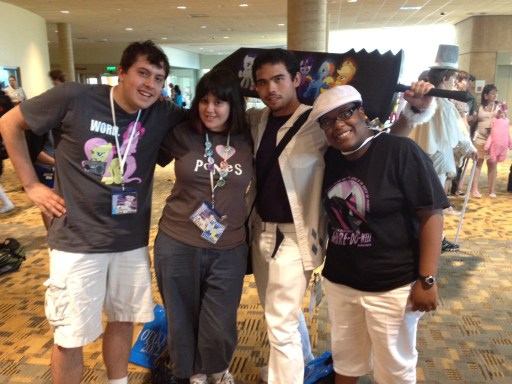 Me (second from left) with friends at the con after the brony meetup on Saturday.

Otakon is the U.S.’s second largest anime convention (after LA’s AnimeExpo) and the largest on the East Coast, and I figured that my four years living in Baltimore were not complete without at least one visit. As it turned out, Otakon is a pretty good choice for a first convention: there is never a dull moment with panels on just about everything Japan-related you could imagine, from popular to lesser-known series’, from fan parodies to Japanese cooking to video game music to cosplay tips. And despite the actual convention’s fairly strictly East Asian focus, there were also fan-organized meet-ups for various kinds of non-anime geeks, like bronies, Nerdfighters and Homestuck fans. But for the sake of this article, I’ll mostly be summarizing my two favorite panels: “Sexism in Anime and Fandom” and “Navigating LGBT/Queer Identities and Issues within Japanese Media and Cultural Appreciation,” which spoke to me the most as a feminist, queer anime fan.

Disclaimer: Personally, I’m by no means an expert myself in gender or sexuality in Japanese culture or anime, or its differences from American culture in those respects; I’m just reporting on what I learned and the notes I took from the panels, as well as my own observations as a white American anime fan. 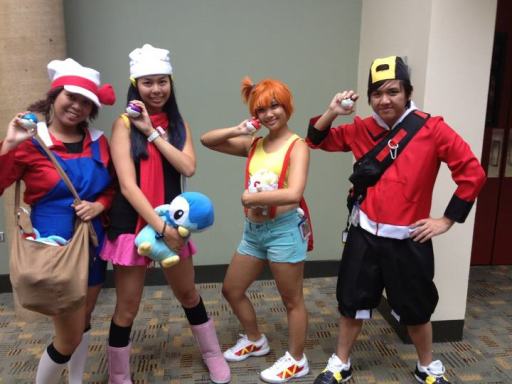 Sexism in Anime and Fandom

This Saturday afternoon panel was run by Lauren Rae Orsini, of The Daily Dot and Otaku Journalist, and Patrick Taylor, of Anime-Planet. It could be roughly divided into two sections: the first dealt with sexism in anime, manga and video games themselves, and the second dealt with it in the larger geek culture, including convention culture and cosplay. The slides are available via Patrick’s tumblr!

One of the major issues that was discussed with regard to anime itself was the issue of fanservice, a term that originated in the anime fandom for depictions of characters (usually women) in sexy outfits or poses purely for the sake of drawing in titillated viewers. Obviously, this trope is far from exclusive to anime, but the medium is particularly notable for it, due to the often over-the-top, unrealistic heights (link NSFW) it can take. Of course, anime also has a higher-than-usual amount of male fanservice; whole genres, such as yaoi (anime/manga featuring gay male relationships that are usually aimed at women), are built on it. But as the panel pointed out is that, while male “fanservice” characters are allowed to have well-developed personalities, but female “fanservice” characters are needed to be “accessible” in their personalities. Men can be eye candy but also be actualized as characters; women are eye candy first and foremost.

There was also a lot of discussion on the portrayal of “geek girls” in anime. One thing they noted is how geek girls in anime/manga “are the closest to relatable for female fans, but aren’t there for them.” Nearly all of them enjoy showing off their bodies, which isn’t a bad thing, but when sexualization is the only depiction, it’s sending the message to male otaku that girls watch anime and go to conventions for them. This was related to the way that girls are often forced to prove that their geeky interests are legitimate (especially if they are sexually-attractive) and that they’re not just “followers” in a way that male geeks often don’t have to. This is hardly exclusive to geek culture, but there does seem to be this particularly strong fear by some male geeks of non-geek girls “infiltrating” their spaces and “tricking” them, or something. Particularly “sexy” girls: hence the controversy, mentioned at the panel, over the former Miss USA identifying herself as a geek because of her love of history and Star Wars, as though the fact that she was in a beauty pageant means she can’t possibly be allowed to use the label. 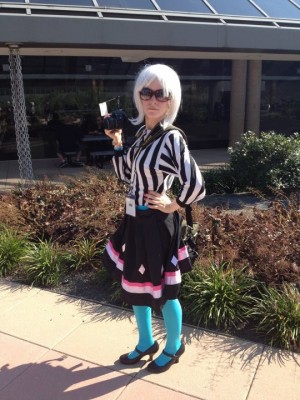 Humanized cosplay of Photo Finish from My Little Pony: Friendship is Magic from the Saturday brony meetup

Another way in which sexism manifests itself in geek culture that was presented was through cosplay at conventions. In a survey the panelists took of 97 anime-convention-goers, 63% of female-identified cosplayers reported being harassed in some form while in cosplay, while only 43% of male-identified cosplayers did. And “nearly all respondents said they didn’t report the harassment for fear of not being taken seriously by staff.” The harassment that women faced was usually based on appearance – either being ogled if they were perceived as sexy, or told that they “should wear something else” if they were seen as not sexy enough for the character they were portraying. One girl remarked that she was surprised how much of the policing of “not sexy enough for that character” comes from other women. Others discussed how some “you shouldn’t play that character” comments also come from racism, despite the fact that black and Hispanic anime fans often have a limited number of characters of their races who they can cosplay. One person brought up the way that fans often put down Muslim women who incorporate their hijab into their costumes. Despite all this, though, most fans in the survey presented described conventions as “safe and welcoming” and thought that the anime fan community was a self-aware one in regard to the various issues with it.

Though it’s covered more in the next panel I’ll be discussing, there were also some points made about gender-ambiguous characters. While they noted that gender is often treated “as a performance” more often in anime than other forms of media, the transphobic notion that “gender-bending” characters are “traps” is still unfortunately common, both in the media itself and in the fandom’s reactions to such characters.

One girl presented that she thought that anime/manga was often sexist in terms of what it saw as “boys’ series” (“shonen”) vs. “girls’ series” (“shoujo”). While stuff that falls under the “shonen” genre encompasses a wide variety of genres and themes, from action-and-adventure to sports to fantasy to historical (take this image from the popular Shonen Jump magazine as an example), the stuff that is categorized under “shoujo” tends to mostly fall under slice-of-life/romance, or magical girls like Sailor Moon. While I thought this was a bit simplistic, the lack of variety in shoujo compared to shonen was something I found off-putting about manga after my initial interest in it as a teen. It felt kind of insulting that as a woman, it would be assumed that I would only be interested in either romance and everyday school situations, or girly fantastical superheroes, while the boys got so much more variety aimed at them. But the panelists suggested that a lot of this had to do with the kinds of shoujo that got picked up for publishing/airing in the U.S., and that as fans we could demand more variety by looking for stuff “on the margins” that reflects our interests better and making it known to the big anime/manga distribution companies.

What was really great about the panel, to me, is that Lauren and Patrick didn’t just leave us with identifying problems, but also solutions. Particularly, they gave the panel-goers tips for what to do when witnessing harassment, whether at conventions, in online gaming or anywhere else, which is that: silence often looks like agreement, and you can’t assume that someone being a jerk knows that he’s being a jerk. We need to shame sexist behavior and make it clear when we are offended, even if we think the other person might be “joking.” 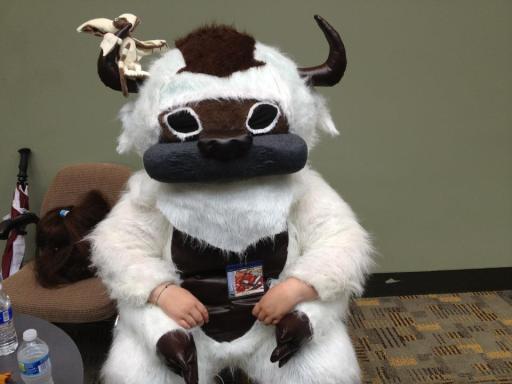 Cosplay of Appa from Avatar: The Last Airbender