Cover image via akimiya on deviantART

I watched a lot of TV as a kid. As soon as I got home from school every day, I’d plop down on the couch, devouring either novels or whatever I could find on Cartoon Network or Nickelodeon. And in the mid- to late 1990s, that often meant anime. While I adored the more boy-oriented Pokémon and Digimon like everyone else in my generation, I think it says a lot about me and the person I would later become that my first anime – hell, first serial television series I ever became obsessed with – was a horse of a very different color: Sailor Moon.

Sailor Moon is a show that is all about teenage girls learning to kick butt and take names, and with the exception of protagonist Usagi Tsukino’s (the titular Sailor Moon’s) love interest, Mamoru (also known as Tuxedo Mask), it’s uniquely girls who have this power. For a previous generation of girl TV watchers, maybe Sailor Moon was a breath of fresh air – finally, a whole show of female warriors and superheroes, not just tokens! – but for me, it was one of the first I saw at all. Maybe it’s the influence of Sailor Moon that is part of what made me a feminist, someone who didn’t think that being a girl was a weakness but was, in fact, a special kind of power.

But it’s not just Sailor Moon; there’s a whole genre of this anime, called Magical Girls. It’s a genre that’s been going strong since the 1960s – originally inspired by, of all things, an American show, Bewitched — but my generation was a big turning point for it, when magical girls started to get blended with superheroes and when many classic, influential works of it, like Sailor Moon herself and Cardcaptor Sakura, were airing on TV and filling up bookstore shelves. It also was influencing American cartoons, probably most notably The Powerpuff Girls, another girl-power show from the late ’90s that I adored.

As I got more into manga and anime as a teenager, I found myself, with one exception, pretty bored by the male-centric shonen adventure stories that made up the bulk of the popular series on Toonami and Adult Swim. Instead, I continued to find solace in the shoujo section of the manga aisle, namely, with other Magical Girl series. Not all of them were up to the quality of their predecessors, but at least it was nice to see girls like me – and girls not like me, for that matter – as the ones with the power to save the world, rather than yet another angsty boy. So when one of my Tumblr followers posted this essay from her blog The Afictionado about the feminist aspects of the Magical Girl genre, I wanted to further open up the conversation about this genre and how it both empowers young girls and reveals so many of the problems with other media’s take on “strong female characters.”

For starters, let’s talk about Magical Girl shows and femininity. In a lot of more typical superhero shows, the token female character has to learn how to be “strong” in traditionally masculine ways. While there’s nothing wrong with female masculinity, it’s often framed as if successfully being “like the boys” is how these girls succeed at anything else. Magical Girl shows turn this on its head, giving magical girls feminine outfits and often even girlier weapons or attacks. As The Afictionado writes:

[T]he genre emphasises the power of the young woman and shows the audience that being a girl doesn’t make you weak. In fact, it’s what makes you powerful—Sailor Moon features its girl team transforming into their flippy skirts and high-heels with “make-up” in their battle cry, and the weapons they use come in the form of winged wands and sparkly tiaras. That’s right, weaponised femininity. Instead of shying away from the traditionally girly in order to give themselves strength, the Magical Girls throw that very idea in the trash and face their enemies down empowered with the feminine.

This emphasis on valuing femininity spreads to the Western media inspired by magical girl anime as well. For an example, there’s one of my favorite episodes of The Powerpuff Girls, “Bubblevicious,” where the girliest and sweetest of the Powerpuffs, Bubbles, proves to her sisters that she’s as strong of a fighter as the rest of them.

What’s more, magical girl characters generally have depth beyond simply being capable fighters, unlike a lot of more typical “strong female characters” in the media. They’re girls we can relate to, who are not perfect and have real-life problems, and yet are still admirable. Usagi herself often cries, is clumsy, eats a lot of junk food and gets bad grades, and yet she’s still a caring person who, over the course of the story, matures into a determined woman who is more than ready to fill the big shoes awaiting her as Neo-Queen Serenity of Crystal Tokyo. But as mentioned before, if you can’t relate to Usagi – or the many other magical girl protagonists made in her image – there are usually other characters who fit the bill. As a good student, I couldn’t see much of myself in Usagi’s string of failing grades, so instead I identified with overachiever Ami (Sailor Mercury), and accomplished musician Michiru (Neptune). More athletic girls can find themselves in Makoto (Jupiter), or more butch girls can see themselves in Haruka (Uranus). There’s a Senshi for every girl, and later series followed this pattern. For example, in one of the series I loved as a preteen, Tokyo Mew Mew (dubbed as Mew Mew Power), the Usagi-like protagonist Ichigo is balanced out by more graceful, stoic characters like Minto and Zakuro. 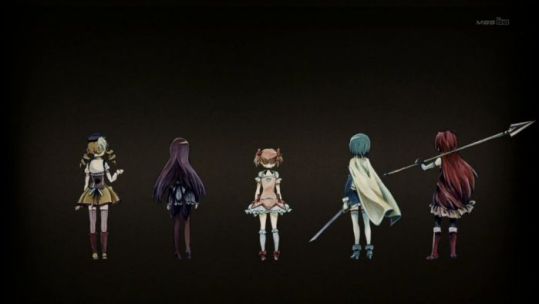 The genre has become so iconic in anime circles that it even has its Watchmen, dark deconstructions of its various conventions: the most notable of that probably being Puella Magi Madoka Magica, one of the most popular anime series of the last few years. In this show, young teenage girls with “magical potential” are offered the option to become magical girls by a mysterious cat-like being called Kyubey, with one of their greatest wishes granted in exchange for using their powers to fight mysterious multi-dimensional abominations called “witches.” It darkens everything about the genre: Kyubey isn’t your typical cute animal familiar, and the cliché heterosexual love story that so many protagonists get ends up being one of the girls’ downfalls. Without giving too much away – because this is a series that you really should see – the series could possibly be read as anti-feminist for how Kyubey takes advantage of young girls’ emotions and they’re shown as potent sources for destroying as much as for saving the world. That is, if it weren’t for the ending, where the show’s Everygirl protagonist, Madoka, finally decides that she’s had enough and takes matters into her own hands. The Afictionado says:

And there is that all-important message again: simply because you are a young woman, it does not mean that you are weak. You have the potential to be powerful and you and your peers do not have to sit back and be the squealing, swooning victims in any system, not in spite of but because you’re a girl. You can go kick your evil oppressors in the chest with your pink ribbon-tied shoes, blast them with your flowery wand and use the power of your unshakeable bonds of friendship to shoot the bastards out of your lives and into oblivion.

Also, whether dark or light, straight or deconstructed, nearly every episode of every Magical Girl show, with their emphasis on girls solving problems and working together with each other, passes the Bechdel Test with flying colors. They represent every type of relationship between women – and I do mean every. What’s especially interesting about a lot of these shows is not just what they do for women in general, but specifically for queer women. At the very least, they’re often chockful of lesbian subtext; in Puella Magi Madoka Magica, Homura and Madoka all but kiss in the finale, and Kyoko could easily be read as in love with Sayaka. But some actually have canonically lesbian characters. They’re all over the genre – even Tokyo Mew Mew has a girl confess her love to another in its anime – but one of the most notable examples of this is, again, from Sailor Moon: Haruka Tenoh and Michiru Kaioh, aka Sailors Uranus and Neptune. 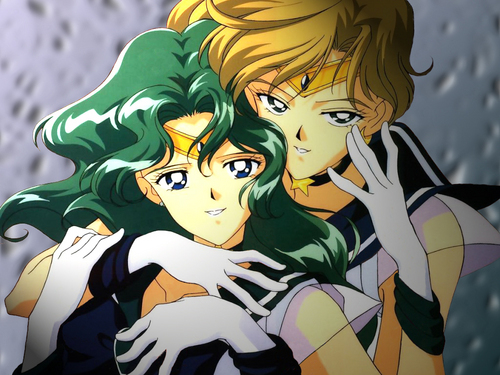 Sailor Neptune and Uranus via Fanpop

You’d be hard-pressed to find a queer lady anime fan for whom Haruka and Michiru weren’t somewhat transformative, even in the watered-down version the North American dub of the anime gave us (where the translators tried to pass them off as “cousins”). For me in particular, there were one of two fictional lesbian couples I was obsessed with in college who helped me come to terms with my own bisexuality (the other being Naomi and Emily from Skins). I was on a comics kick and decided to read the entire Sailor Moon manga, and those girls spoke to me.

Anime has a whole genre dedicated to lesbian relationships, called “yuri” (and a male equivalent, “yaoi”). But the couples in those shows never seemed very much like couples I knew in real-life. Except for Haruka and Michiru, despite fitting into some of the genre’s stereotypes (like their very butch/femme dynamic). Theirs was, for once, a realistic love story; they got to know each other and started fighting alongside each other as Senshi, and slowly realized that their bond was more than that. And what’s even better, the other Senshi accepted them completely; to them, falling for a girl was not all that different from Usagi falling for Mamoru.

It’s often not easy to be a feminist, queer anime fan, as the culture, like a lot of other geek subcultures, is full of less-than-savory elements. A lot of other anime – even some that I love – are far from feminist or empowering to women. But if there’s one thing that anime has going for it, it’s so many of those Magical Girl shows that have given us something that’s so rare in media from either side of the Pacific: truly strong, yet relatable female heroes, with close relationships – platonic or otherwise – with other women. I’ll always be grateful that Sailor Moon was on my airwaves as a kid, to show me that girls could do everything the boys could do – and often, even more.