This past weekend, my girlfriend and I had self-care Sunday, where we listened to Selena and cleaned my apartment because it was necessary. The verdict of the Trayvon Martin case was basically the last straw after so many instances in the past month of our government’s disregard for human rights.

If you are a Texan, the past few weeks have been especially heartbreaking for you because Texas Republicans suck and finally managed to push their ideals down Texans’ throats. After Gov. Rick Perry signed HB2 into law this morning, Texas is now one of the most restrictive states when it comes to abortion rights. HB2 outlaws abortions after 20 weeks of pregnancy, shuts down all but five abortion clinics in the state and tightens guidelines when it comes to abortion drugs. It’s a law that undoubtedly affects so many in the state: low-income, working class, people of color. 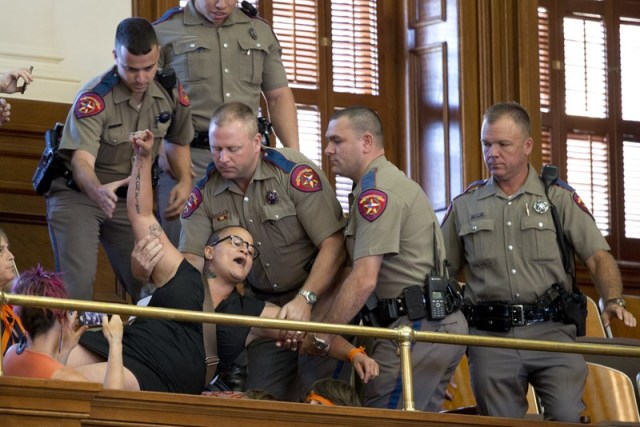 HB2 is a continuation of Texas’s already very restricted access to healthcare. In 2011, during the last legislative session, Texas cut funding to any clinics that had ties to abortion services or providers (even though the funds did not go directly toward abortions) as well as non-abortion affiliated clinics, resulting in nearly half of women’s health clinics around the state to close. Also, Gov. Rick Perry rejected additional Medicaid funds from Obamacare. So getting affordable and safe healthcare in Texas was already hard enough without this new bill.

Now, HB2 requires abortion clinics to meet the same standard as Ambulatory Surgical Centers (same-day surgery centers), which will force 37 of 42 abortion providers to close. These clinics don’t just provide abortion services, but vital healthcare services needed by many in the queer communities including STD screenings, cancer screenings, HIV testing, and pregnancy testing. With only five open abortion clinics between San Antonio, Austin, Houston and Dallas, it makes it significantly more difficult for folks living in rural and border towns to make a multi-day trip to one of these major cities at least three hours away.

Texas isn’t the only state in the battle for reproductive justice—it seems like restricting reproductive rights is a trend these days. North Carolina legislature is currently trying to pass their own stringent abortion laws by attempting to attach them to unrelated bills. In Wisconsin, a judge blocked a new abortion law that “bans doctors who lack admitting privileges at nearby hospitals from performing abortions.” 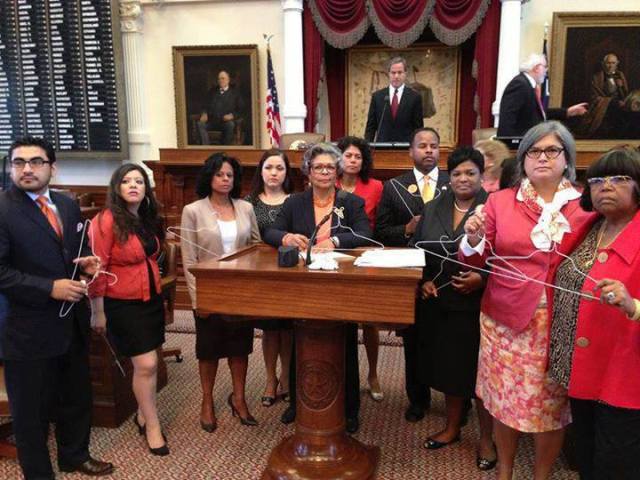 Sen. Wendy Davis and her snazzy Mizuno shoes became superstars overnight after her 11-hour filibuster in late June. But we also need to give props to a team of kickass women of color in the House of Representatives (Dukes, Farrar, Gonzalez, Allen, González, and Thompson) who were key players in the battle against SB5 that helped delay the vote on the bill, ultimately helping to kill the bill for a period of time.

And we also have to applaud the Texans who organized, protested, shared their testimony and made their voices heard at the capitol. What actually killed the abortion bill the first time around was the citizen’s filibuster: the pro-choicers sitting in the gallery and waiting outside in the rotunda—“the unruly mob”—made so much noise they drowned out and delayed the vote. I’ve lived in Texas all my life and it’s been a red state for as long as I can remember. Rick Perry has been the governor since I was 9. (I was in third grade!) So when I saw people actually speaking out and protesting against the Texas government, it was amazing. 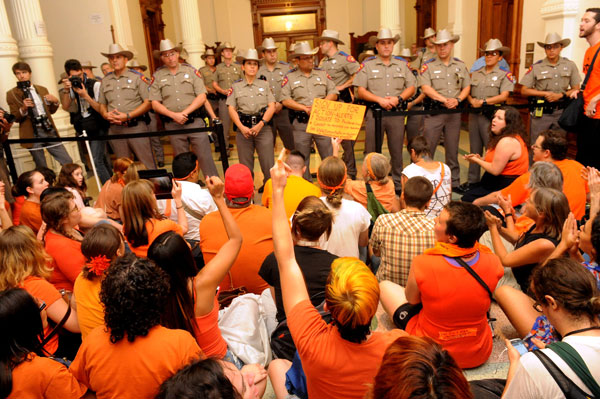 Wendy’s filibuster, with the help of the citizen filibuster, killed the bill by delaying the vote until after the first special session officially ended. Unfortunately it didn’t stop there, because Perry called for a second special session. This time around there were more anti-abortion people (blue shirts) present at the capitol than there were at the time Wendy filibustered. Testimonies were made by both sides of the argument (including some outrageous ones from men) at the committee hearings. The Texas House debated HB2 for 10.5 hours before it was eventually passed to the Senate. While the Senate debated SB1, Texas DPS confiscated tampons, and not guns, for safety purposes of course. It didn’t matter, Texas’s view of safety is skewed. After all, the abortion bill finally passed and the message was a clear abrasive assault on Texans’ choice.

During my time at the capitol protesting SB5 during the citizen filibuster and at a pro-choice rally the night HB2 passed, I was happy to see the hundreds of queer faces, young women and men, and people of color wearing orange. But at the same time, I was well aware that those most affected by this legislation were not present. The women who live along the Texas-Mexico border, poor women of color, the Latin@s who make up the majority of the population in Texas, who have the highest birth rate and are the most uninsured population, were not at these protests or rallies or even thought about in our government. They live hundreds of miles from the state capitol and can’t take time off of their job to share their testimony. I was also sad to see the lack of Spanish-speaking media (or mainstream media) coverage during the events at the capitol which is probably the only way these groups would know what was happening.

Even though this bill still passed, I felt there was an awakening in Texas. Activism and awareness were stirred in many Texans’ hearts and it sprung up new organizations like the Feminist Justice League. This is just the beginning.