In just under a month, I’ll be heading to the BUTCH Voices Conference, and I couldn’t be more excited. You see, I identify as butch, and I have a voice. A butch voice. And it’s time for that voice to BE HEARD.

Just kidding, I’m going to listen. I’m going to listen to, learn from, admire, revere, and maybe arm-wrestle (jk – or not?) a multitude of amazing MOC folks who are all coming together for one amazing weekend of workshops, panels, performances, keynotes, parties, and good old-fashioned community. And I cannot wait!

I’ve peered longingly from the outsides for a few years, but I’ve never actually attended BUTCH Voices before. For the uninitiated, BUTCH Voices is “a grassroots organization dedicated to all self-identified Masculine of Center* people and our Allies.” Their mission is “to enhance and sustain the well-being of all women, female-bodied, and trans-identified individuals who are Masculine of Center. We achieve this by providing programs that build community, positive visibility and empower us to advocate for our whole selves inclusive of and beyond our gender identity and sexual orientation.”

The keynote speakers include the Bay Area’s own Cherríe L. Moraga, esteemed Xicana poet, playwright and essayist, co-editor of This Bridge Called My Back: Writings by Radical Women of Color, Stanford professor of Creative Writing, Chicano/Latino and Indigenous Studies, and Playwriting, and champion of social justice and advocacy.

Also on the roster is ultra-badass Jay Toole a.k.a. Super Butch, who spent years fending for herself on the streets of New York before co-founding Queers for Economic Justice in 2002 and Jay’s House in 2012, “the very first LGBTQ adult shelter in the country.” 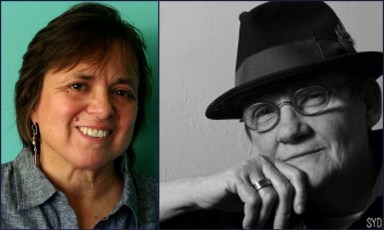 Butch (K)nights (which is what I think the evening program should be called, but isn’t) kicks off with Friday’s Film Night, which will include a selection of awesome short films called Butch Briefs, followed by the Performance & Gala on Saturday, featuring storytelling by keynote speaker Jay Toole, music, performances and raffles.

Conference organizers stress that BUTCH Voices strives to be 100% inclusive, and welcomes any and everyone who identifies along the butch spectrum, as well as non MOC-identified allies. The conference’s board includes trans-, female-, and none-of-the-above-identified butches, and their programming aims to reflect that. According to Volunteer Coordinator Megan McEachin, “We are proud to welcome anyone who identifies as masculine-of-center, butch, stud, boi, macha, or any of the slew of other terms that people use to self-identify. We are not in the business of defining butch or policing identity–what we’re here to do is create a space for a community to grow. Who’s in that community depends entirely on the participants, not on how we or anyone else defines butch.” 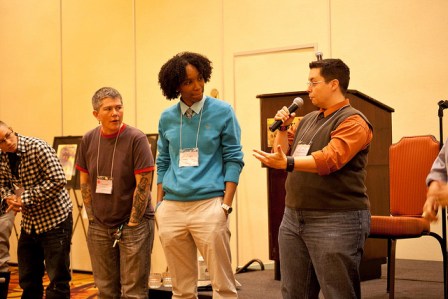 Current schedule and workshops are coming soon, but if previous conferences are any indication, the lineup should be stellar: current and past workshops include Black Butch/Stud Identity, Being the Other Mother/Parent, Two-Spirits, Fitness for Butches, How to Maintain Your Identity in the Workplace, ButchMisogyny, workshops for female ID’d butches, and more. And even if you’re late to this party, don’t stress – BUTCH Voices is still accepting proposals on their website! Any and all proposals are welcome, and organizers are especially seeking workshops on young butch life and identity – so speak up, youths!

If you’re interested in being a part of the magic, you can register here, or sign up to be a volunteer (volunteers and presenters attend for free!) Desperately want to go but not sure you can afford it? No sweat – the conference offers financial assistance for those in need. Have more questions? Email meg@butchvoices.com.

Where: Oakland, California. The official host and primary venue is the Marriott City Center in downtown Oakland. Room rates are $119.00 per night. For reservations call 510-451-4000 or reserve online here (BUTCH Voices rate will automatically apply).

Butch on, friends, and I hope to see you there!

*Masculine of center (MoC) is a term, coined by B. Cole of the Brown Boi Project, that recognizes the breadth and depth of identity for lesbian/queer/ womyn who tilt toward the masculine side of the gender scale and includes a wide range of identities such as butch, stud, aggressive/AG, dom, macha, tomboi, trans-masculine etc.