Editors Note: Autostraddlers, we thought you’d have some feelings about this from your queerlesbianbipanasexual perspective. Do you feel like conventional relationships could benefit by adapting long distance relationship habits? Does our queer perspective change these applications in any way? Share your feelings in the comments! Do it. 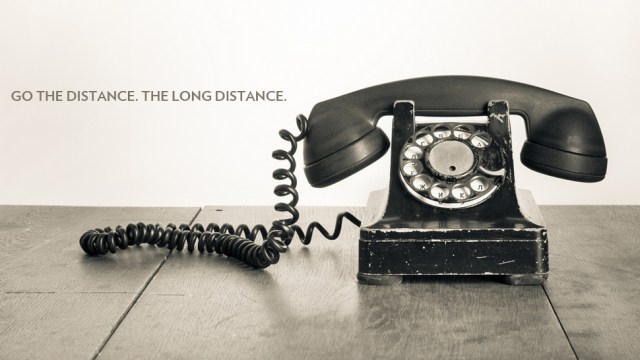 When you like someone and want to be with them, all you wanna do is see their face all the time. Coincidentally, seeing someone’s face all the time is exactly how to kill a relationship softly with face-overloaded garlic breath. What the hell are faces supposed to do with other faces all up in their face? (Besides not eat so much garlic?) The answer: Go the distance. The long distance.

Researchers did a study published in the Journal of Communication of 63 young hetero lovers, half of whom were geographically separated, about their talky styles. Keep in mind these are young people, around 21 years old, who are still dumb about love, but still. After asking them to keep a weeklong diary, researchers discovered that it wasn’t all the stress and brouhaha it’s often depicted as, and in spite of not being around each other, they felt greater intimacy. These lovebirds didn’t interact as much as couples in the same general vicinity, but when they did, they kept things as fresh as hours-old leftovers by rarely cracking open that Tupperware lid. (The Tupperware bowl is the Pandora’s Box of TMI in this stellar analogy.)

Absence makes the heart grow fonder vs. out of sight out of mind is basically the conundrum of all love everywhere. Everything hinges on the perfect balance of these two conflicting notions. I love you so much and want to see you all the time, but I can only see you so much before you become as appealing to me as a glass of cod liver oil. We know this. We know it intuitively, and yet, we can’t seem to stop being in the same room with the people we are with, especially if we share the same house. Balls.

But we can solve this problem. We can make our everyday, in-person relationships exciting and fresh by pretending we are not really together at all. Try this:

Study: Long-distance lovers didn’t see other face to face a lot, so they had to make up for that in other ways.

Application: You’re you, all day, every day, 24/7. And that, my friend, cannot stay exciting forever. By altering something about yourself often, you create the illusion of a different person who is more mysterious and intriguing than you ever could be according to the laws of physics. Wear different glasses. Start dressing in monochrome. Change your hair part. Talk with an accent. Do whatever it takes to seem endlessly new, short of inventing entire personalities, because that would be too hard to keep straight.

Study: People who don’t live around each other don’t “hear” each other “talking” in their own “homes.”

Application: Far as you know, you’re the only person in this house, and you definitely don’t hear someone asking you if you paid the gas bill or why you forgot to take out that smelly trash. Must be a ghost or something. Oh look, it’s another Snapped marathon on TV!

Don’t Talk About Your Day

Study: Far-flung lovers rarely talked about the mundane, preferring instead to focus on more meaningful interactions like thoughts/feelings.

Application: When your partner asks how was your day? Refrain from actually answering with the story of how gross the veggie patty was you cooked in the office microwave that still smelled like reheated salmon. Instead, say something more urgent and romantic like, My god your eyes YOUR EYES. Or reveal something that hints at previously unseen depth, like, I just got back from staring out at the ocean for an hour, feeling so insignificant in the face of her vast glory.

Talk Primarily on the Phone or Skype

Study: The long-distance lovers talked more by phone or video messaging, and not so much by email, which was considered unromantic (clearly, they haven’t seen Gmail’s new tabs).

Application: Even if you live together, consider Skyping from different rooms to catch up about your lives (omit everyday details!). Even if you could literally get in your car and drive over to their house, just call them up and chat for an hour about your deepest most private feelings and concerns. If they ask if you want to come over, suddenly remember you were supposed to be somewhere.

Study: Being apart meant LDRs had less frequent exposure, but for longer periods of time.

Application: How can you miss someone if they won’t go away?! Cut whatever amount of time you physically spend with your significant other in half, so that whether you are in the next ‘hood over or merely the next room, you seem hard to overdose on and ripe for pining over. But feel free to text at length from the bathroom of your house or the restaurant you’re in, even when you’re together.

+ Turning your head away a lot, so they can’t see your face too much.
+ Driving separately to events/dates you’ll attend together.
+ Canceling every other date due to work engagements.
+ Meeting up when you only have five minutes, to create urgent longing.
+ Refusing to see each other when you’re sick/bloated.
+ Making out a lot in cars.

Make Every Date Your First Date

Study: It goes without saying that when these folks finally see each other, it felt like a first date all over again.

Application: Everyone goes bowling and takes an archery lesson together in the beginning. Later on, spending an evening together online looking for an apartment with a slightly better patio officially counts as quality time if there’s booze involved. No matter how much easier it is to settle into your respective couch imprints and call it a day, try to plan actual dates that encourage new experiences or at least good stories for later, when you’ll need to talk about something other than what you actually did.

Idealize Everything Your Partner Says/Does

Study: When you strip a person down, removing all their tedious, mundane, everyday logistics, what is left but a skeleton of ideals, principles, values, and feelings? LDRs were able to easily keep each other on a pedestal because there was no everyday stuff to taint up that golden image of perfection.

Application: You can still slather some polish on this tarnished lover of yours who lives three blocks away and works out at your same gym. For instance, if your partner mentions he’s experimenting with different cuisines, you should interpret this as proof positive that he’s both deeply open-minded and seriously committed to fostering meaningful connections with the global bazaar that is our new world, and could perhaps pursue a new career as a diplomat. And you should tell others about it. Maybe on Facebook.

Study: Separated lovers could not rely merely on physical presence to signal continued loyalty, interest, or love. They took nothing for granted. It was show-and-tell day every day.

Application: Pretend you are in a real-life version of the movie 50 First Dates.

Of course, if all of this seems like waaay too much effort for someone who is literally on the couch right next to you and hasn’t moved in 2.5 hours, and you realize that you are not equipped to keep up massively stressful early courtship rituals for the rest of your life, you could always just go the easier route here and create actual distance. Apply to an exchange program thousands of miles away, or, if all else fails, simply move to a new city. Hey, remember? You were looking for a change.