Hi, neighbor. Welcome back to Boob(s on Your) Tube, your weekly round-up of all the queer stuff on TV. Please forgive me for the lateness of this batch of recaps. They are posting four days behind schedule due to a valuable lesson I learned in the early morning hours last Thursday at an airport customer service desk. And that lesson is: When you get punched in the jaw, it actually has the potential to cause a lot more damage to your face/mouth region than what they show you on Teen Titans Go, proving once again that TV is better. And so here we go. 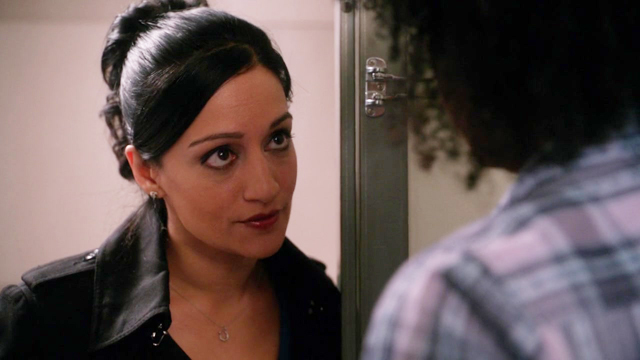 Kalinda finally broke up with Cary on this week’s The Good Wife, but sadly didn’t run back to the (semi-)open arms of FBI Special Agent Lana Delaney. In fact, I get the distinct feeling that Kalinda’s ending isn’t going to be so happy at all when Archie Panjabi waltzes off to headline her own show. And by “not happy” what I mean is, I think she’s going to die. Just a feeling I have based on nothing more than my intuition and the fact that every bisexual character of color gets axe-murdered on TV at some point.

I could be wrong. I hope I’m wrong. What I’m right about, though, is that I need Kalinda’s trench coat collection. Those jackets continue to be the best characters on The Good Wife. 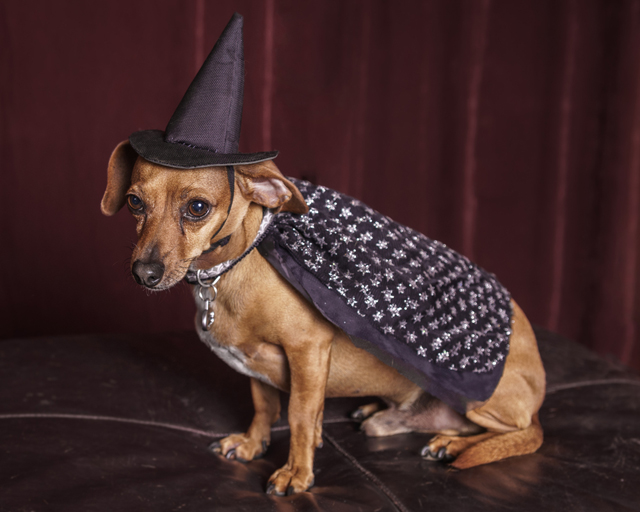 Tara didn’t show up on this week’s The Walking Dead, apparently, which probably means she’s still alive? I’m just going to assume she is still alive because I want to post another “zombie dog” photo from Shutterstock. 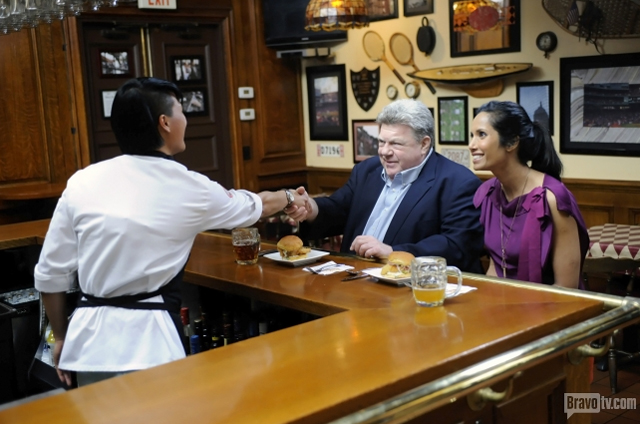 This week’s Top Chef featured my all-time favorite kind of food — pub food! The chefs had to serve Norm from Cheers, and then they took over an Italian restaurant owned by a former Top Chef Masters contestant and had to serve vegan dishes to Emmy Rossum, whom Padma kept referring to as “my girlfriend Emmy Rossum.”

Melissa King didn’t get much screentime this week, which is always a blessing and a curse on reality TV. A blessing because it means you’re for sure not getting eliminated. A curse for viewers who have fallen in love with Melissa King’s perfect, smiling face. Melissa King served Emmy Rossum some risotto instead of noodle pasta because of gluten and Emmy Rossum loved it, which we know because she kept saying like, “Emmy Rossum loves this.” Even though Melissa’s team (the grey one) didn’t have an Italian menu that was as appealing as the other teams’, her fresh pasta dish was the hardest to prepare and she did it well, so she was safe.

In the end, James (the guy with the full-arm Patrick Swayze tattoo) and Rebecca were sent packing with their knives, and Gregory (the guy who keeps winning all the challenges and whose eyebrows are so alive they’re about to jump off his face) revealed he is gay and has a huge crush on Woody Harrelson. 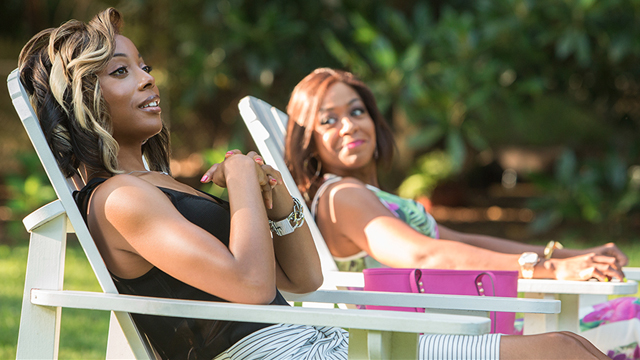 Not much M-Chuck to report on this week’s Survivor’s Remorse. She didn’t even sleep with the real estate agent who sold Cam his new house. She did, however, say the word “back-motherfucking-yard,” meaning that she is only three steps away from passing Bette “Mary Fucking Poppins” Porter on the Best Lesbian Swearer podium. 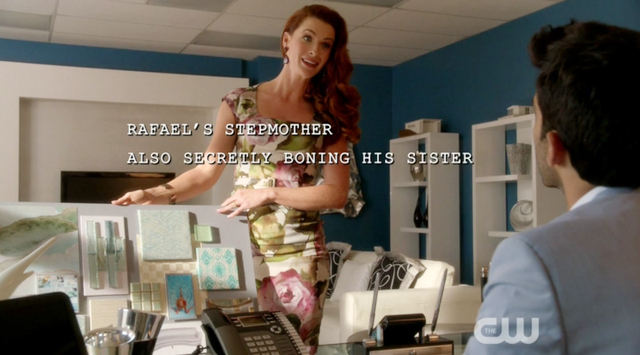 Luisa was not on this week’s episode of Jane the Virgin, but her lover/stepmom sure was. She spent a lot of time asking Rafael where his sister had gotten off to, while he looked uninterested and said she was probably on a bender. At the end of the episode, Rose called up Luisa to tell her she has to come back by the next episode or Jane will win a default judgement against her for malpractice and Rafael will lose his shares of the hotel.

This show continues to be my favorite new one of the season. The diversity! The feminism! The way it laughs at itself! If you’re not watching, why are you not watching? Even when Luisa isn’t in an episode, it’s still worthwhile TV! 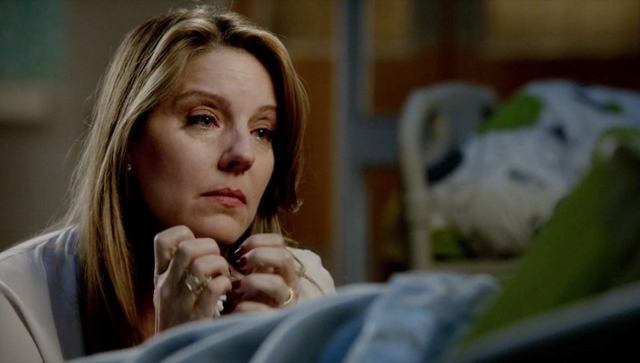 Pretty Little Liars’ Jessica DiLaurentis, who is most famous for burying her daughter alive and giving away her magical parrot, returned to Red Band Society this week to hold her other TV daughter’s hand while she received a pacemaker for her failing heart. Just kidding, she showed up to sign the papers so Kara could get a new heart, and then rushed off to take some meetings. But when Kara woke up, her mom was there, crying by her bedside, partially because Kara isn’t getting any closer to getting a new heart because Kara isn’t getting any closer to passing her drug tests. And also because Kara has a shitty attitude. Kara said that if her mom can make the change from being a straight person to being a lesbian person who is married to Kara’s former nanny, Kara herself can change to be less of a jerk and move on up the heart transplant list. Jessica DiLaurentis explained that she changed because of Daniella, because sometimes a person is so special to you, you want to be better for them. Kara decided she might have that kind of person in her life: a nameless hot guy who chews on toothpicks. 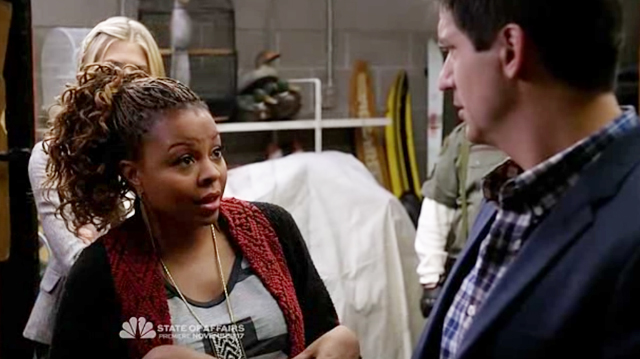 Last week, 12aqua said Marry Me feels very cliche w/r/t gender stereotypes and also very heterosexual despite all the gay characters, something I don’t disagree with at all — but I am sticking with it for a while because the tone of it reminds me of Happy Endings, New Girl and The Mindy Project, all three of which I hated in the beginning for the exact reasons 12aqua articulated. Now, though, they are (or were, RIP Happy Endings) some of my favorite sitcoms on TV. And unlike those shows, Marry Me features a black lesbian character,  something that is way too rare on television for me to miss out on.

This week, Marry Me told the story of Annie and Jake’s sixth “Doomiversary,” the annual celebration of their first date, a day of the year that always ends in disaster. Fire alarms getting pulled, people getting kicked in the face by horses, cars exploding. You know, signs from the universe that a couple is destined to make each other miserable for all eternity. But it turns out that every year’s catastrophes were accidentally wrought by Annie and Jake’s friends. And it was Kay who kicked the whole thing off by sleeping with Jake’s ex-fiance, Fantasia Yang, near their Annie and Jake’s first anniversary. Kay said Fantasia Yang was “full on cray-ola but hoooooot.” Annie was appeased when she found out Jake picked her over a “crazy hot bisexual Asian chick.”

So, yeah. Lots of stereotypes from all directions, apparently. I won’t give up, though. I’m in it to win it like a Shane McCutcheon on Boobr.

Grey’s Anatomy Episode 1106 Recap: This Could Be Us But You Playin’

Orange is the New Black Episode 212 Recap: It’s the End of the World as We Know It and I (Don’t Really) Feel Fine