Welcome to the seventh episode of the first season of the TV show Gotham, a docu-series about one sociopath’s search for the perfect tuna sandwich. 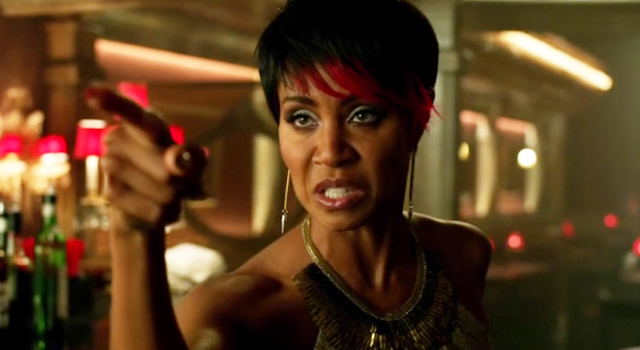 Bring me some more wine glasses to throw at the ground! Now!

But no one is as mad as Fish Mooney, who smashes a bunch of dishes and points her talon-shaped fingernails at every besuited white man in a 20-mile radius and dresses up like an actual peacock — with feathers on her chest and a pearly iridescent teal skirt, the whole thing — and enunciates like a gold medalist in the Articulation Olympics to Carmine Falcone about, “This. can. not. stand. Gordon must die. Bullock must die. Penguin must die. Today!”

It is beautiful, the way Fish does her mouth, but not as beautiful as what I found when I was trying to unearth the symbolism of her outfit:

The whole time Fish is flipping out, Carmine is over there shopping for live chickens. She reiterates that Penguin really must be assassinated immediately. Fish’s boy toy says it too. Carmine tells Fish to go home and have a bubble bath and relax and maybe hire someone to bake her some cookies or soup or something like he did with this beautiful woman who showed up on his doorstep a couple of weeks ago smelling like cinnamon and peacock aggression. 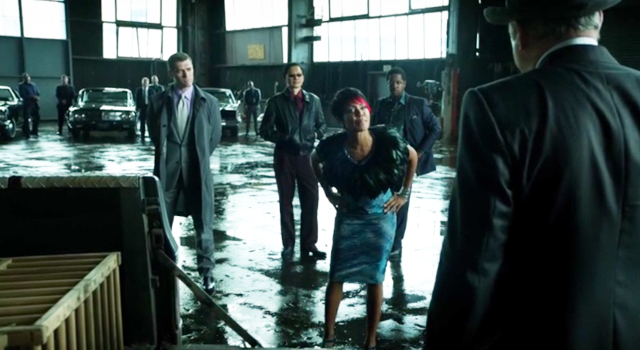 Next time you see me, my dress will be made of your pet chickens!

Falcone: Oh, P.S., where’s Gordon? I thought you were going to bring him to this little meeting.
Fish: He shot a couple of my guys, nbd. I’ll figure it out.
Falcone: Nah, you go one home to your kitchen life, like I said. I’ll deal with Gordon.
Fish: I’ve got this.
Falcone: Nope. Bye!

Meanwhile down at GCPD HQ, Gordon decides that since he’s going to get gunned down anyway, he might as well take some bad guys with him. He writes up a dozen arrest warrants for Falcone, the Mayor and their associated goons for conspiracy stuff in the Wayne murders. Captain Essen is explaining the eleven ways this plan is some hardcore funky junk when Falcone’s hitman, Victor Zsasz, shows up with a gun, a look of psychosis in his eyes, and two female assistants who are dressed as feminist halloween costume nightmares. Zsasz tells all the cops in the station to skedaddle, and they do. 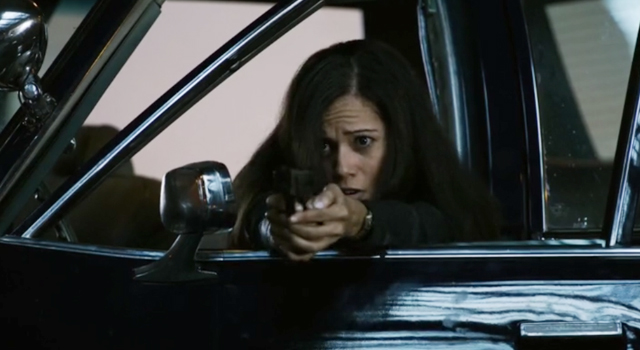 Zsasz shoots Gordon in the spleen which sends him zig-zagging out to the parking garage, crawling between squad cars, leaving a trail of blood behind him like snail slime. It is very tense! The one good cop in the entire city wanders onto the scene and gets shot in both knees and then the chest for trying to intervene. But wait! No! She is not the only good cop in town! Just when it seems like Jim is going to get one step closer to being murdered without being murdered — because he is Jim Effin’ Gordon, best friend of adult Batman and father of adult Batgirl, a thing that is still 20 years away — Renee Montoya and Crispus Allen come whizzing into the garage on two wheels, guns a-blazin’!

I shouted out loud, “Yes! Woo hoo!” and threw my arms in the air when it happened. I mean, obviously it was going to happen, but it felt good watching it happen, and not just because Montoya detractors make me spittin’ mad, and so here she is saving Jim Gordon, and so suck a jingle blaster, haters! 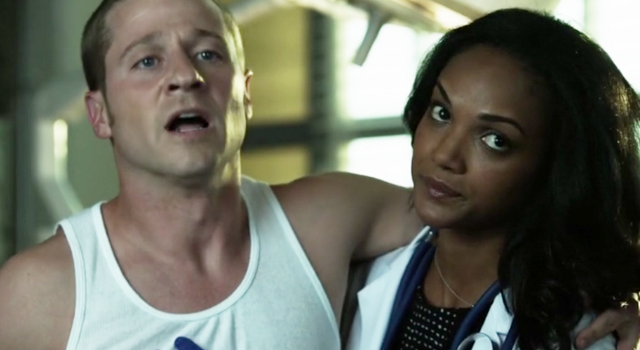 We have got to get her out of town! She is a gorgeous black woman! She’s going to die! 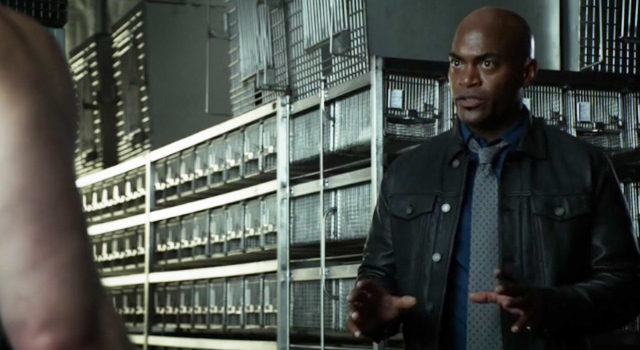 Calm down, man. This is Gotham, not Rosewood.

Gordon crawls in the car and they take him to a veterinarian for stitches because I guess Falcone owns all the doctors in Gotham too. But this veterinarian says she’s “a friend of Montoya” which is kind of like being a “friend of Dorothy” but with more comfortable shoes and less imaginary friends, I think. The vet wants Gordon to sleep in the lab with the rats, but he’s got some stuff to attend to, like taking Montoya and Allen to meet Bruce Wayne.

While Allen sneaks up to Wayne Manor to request an audience with young master Bruce, Montoya and Gordon sit in the car in the dark. He just wants to brood and feel shitty due to getting shot repeatedly, but she thinks this alone time is serendipitous because they haven’t really had a chance to talk to each other face-to-face about their feelings. 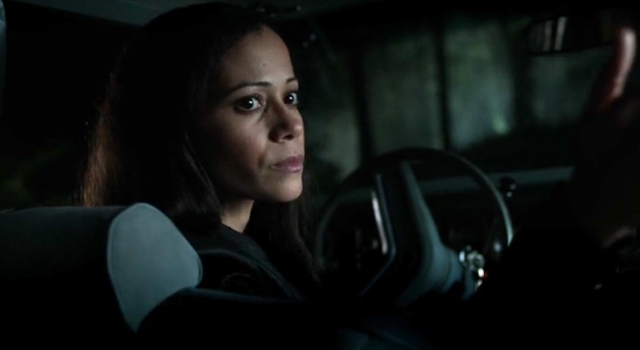 We’ve both seen her boobs. Deal with it. 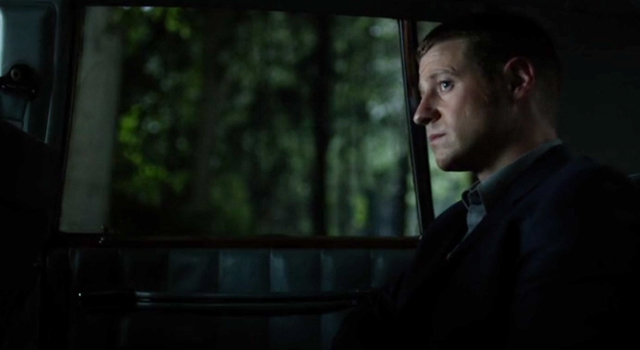 I am the worst at dealing with it.

Montoya: So, I mean, Barbara is really safe? You put her on a bus to Metropolis?
Gordon: Yes. GOD. Why don’t you believe anything I say?
Montoya: Why are you still so pissed I arrested you? You’re the one who convinced half the people in this town you killed Oswald Cobblepot. You’re pissed at me for believing your lies! Which brings me back to my first question: Is Barbara safe?
Gordon: Turn around. Don’t look at me.
Montoya: If we’re going to be a true BrOTP, you have go to stop this shit.
Gordon: No.

Alfred interrupts their spat by slamming Crispus Allen into the car window and nearly breaking his arms. Because in addition to making tea and cakes for Bruce and doing the laundry and teaching him how to sword fight, Alfred also prowls the estate at night and murders trespassers. Alfred Pennyworth is balls-out insane, you guys. Just straight bonaners. But he does let the Montoya and Allen inside to see Bruce once he realizes Gordon is with them.

Gordon: Hey, buddy! This is my friend, Detective Allen, and his partner Detective Montoya, who also happens to be —
Bruce: STOP TALKING TO ME LIKE I’M A CHILD.
Gordon: Fine. Montoya did a variety of scissor-type activities with my fiance before we were engaged and then she arrested me for pretend murder based on her principles and also at least ten percent jealousy.
Bruce: I meant tell me the truth about solving my parents’ murder, but I appreciate your willingness to explain yourself with hard numbers.
Gordon: Okay, here’s another one. I am 96 percent dead meat.

Bruce Wayne throws himself at Jim Gordon and wraps him up in such a hug and the music is like, “A pile of kittens cuddling with a baby giraffe isn’t even this sweet!” But all I can think is that Gordon’s body is held together with duct tape at this point, so: ouch! 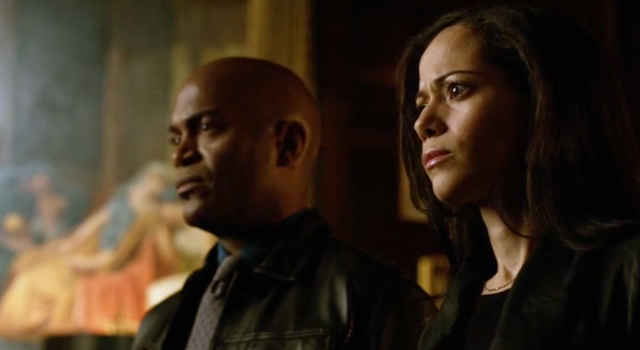 I’ll bet I’d look so fetch in a fedora.

Across town, Fish Mooney is having tea with Sal Maroni and asking politely if he will turn Penguin over to her so that she can butcher him into tiny dead pieces. “Snitches get stitches” is a thing she literally says, and Maroni agrees, but Penguin makes him laugh and keeps finding new ways to make him money and so no. But since she’s feeling disrespected, Maroni asks Penguin to come on out and apologize. Penguin does. Fish does not accept. Instead she promises bloodshed and slaps Penguin in the face so hard it nearly knocks him over.

She also declares him a “bitch,” but in a way that makes it sound like she’s birthing that word into existence. It has several syllables when she says it. It makes the ground quiver. 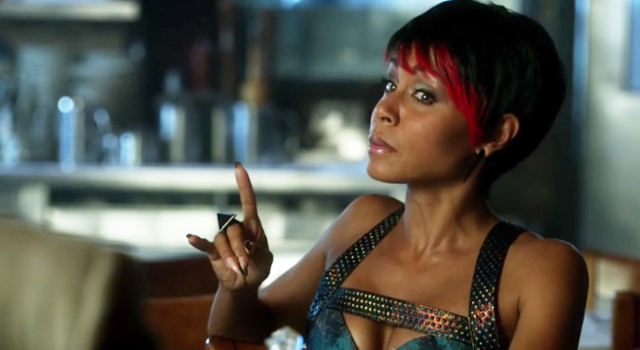 If my fingernails don’t kill you, my ring shiv will.

Fish sends some of her goons to rob one of Maroni’s gun trucks, a thing they accomplish by driving around until they find a gaggle of nuns, kidnapping the nuns, chaining up the nuns in the street, and wrecking the gun truck. Maroni is pissed so he sends Penguin out to retaliate. Penguin robs some of Fish’s guys, kills her boyfriend, and then kills one of Maroni’s guys for back talking him. It’s really just a lot of white dudes getting shot in the kneecaps and gazillions of dollars trading hands. What’s important is Maroni and Falcone decide to meet up on a pier and call a truce, which only matters because it affords Fish Mooney a chance to wear her peacock feather shawl again.

Maroni gets to keep Penguin. Falcone gets some of Maroni’s Arkham land. The end.

Gordon decides to go ahead with his plan to arrest Falcone and the mayor, and he almost accomplishes it — thanks in large part to Bullock bringing some last minute sass to the good guy effort — but it turns out Barbara just couldn’t stay the heck away from that goddamn apartment. Three miles out of town, she hopped off the bus and walked back home. So Zsasz kidnapped her, of course, and brought her to Falcone, who uses her as a bargaining chip to keep Jim in line.

After a long hard day of being a mob boss, Falcone enjoys a delicious cake baked by that girl Fish chose to be his lover, and lovingly tucks his pet chickens into bed. Outside the chicken coop, Falcone meets up with Penguin, who, it turns out, has been working for him all along. They stand under an umbrella and think about the future and which white guys should get shot next. 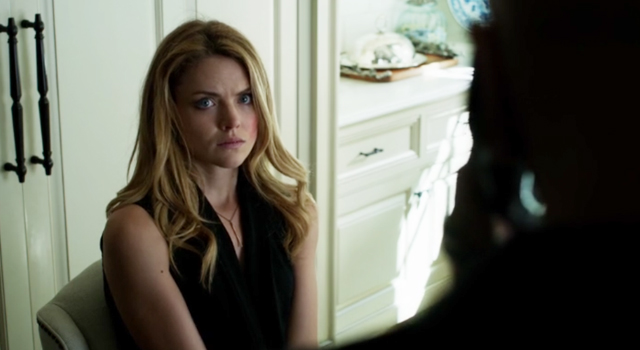 I wish I’d had one last dance with Renee. And also Mary Jane.

Finally, Jim and Barbara go back to her apartment. She locks them both inside. Forever.