Hello, has everyone recovered from the phone sex on Scandal? Yes? Ok, let’s talk about Grey’s then. 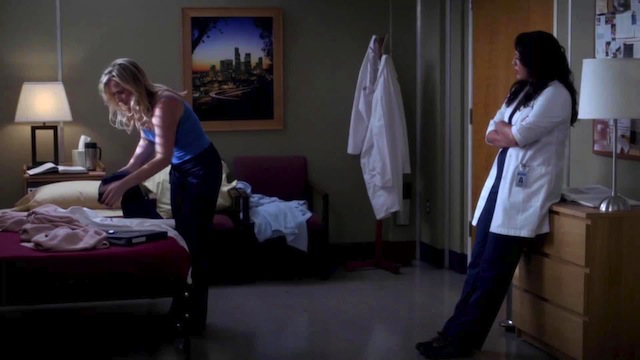 What you doin’? Nothing, chillen at the Holiday Inn.

Lizz R., is this real? Please someone tell me the truth. Do we need to hold a telethon for Arizona?

Does anyone know if Derrick’s trailer on the hill is still available? 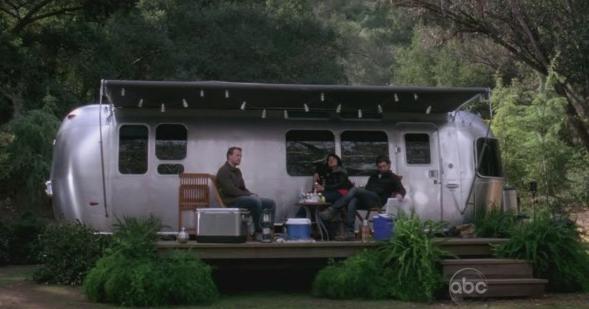 Whatever happened to the trailer??

Did you know that Grey-Sloan Memorial has a wing for wayward lesbians in-between relationships? Instead of Gideon Bibles, each room comes with a dvd box set of The L Word.

Callie catches Arizona getting dressed in her luxury suite at the hospital. 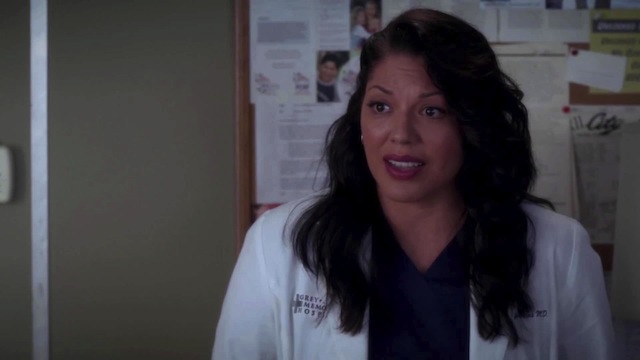 There’s a La Quinta Inn like 10 minutes from here.

Callie to Arizona: “This is where you’ve been staying? I figured you’d get a hotel.”

Arizona shrugs her off. Hotels are for suckers. Real Gs move in silence like lasagna.

It’s easier for Arizona to shack up in a room at the hospital. Dr. Geena Davis Jr. is such a hardass about where her subs sleep. Especially considering that her dungeon is in the next corridor, the one for wayward dominiatrixes made of ice.

Arizona lays on that ex realness to Callie: “Where I sleep is none of your concern.” 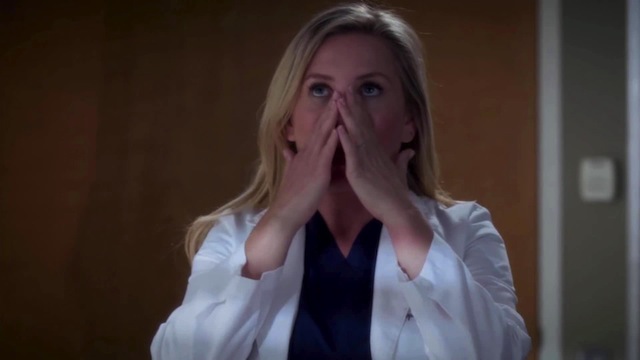 I’m not gonna compromise my Christianity.

Nope, not anymore. Not after our totally different epiphanies in Nightmare on Therapy Street last episode. Somebody drop in a Kermit drinking tea meme, plz thanks. Callie tells Arizona that she never kicked her out which is passive agressive ex-speak for “You did this to yourself” or as my abuela would say “quién te manda.” 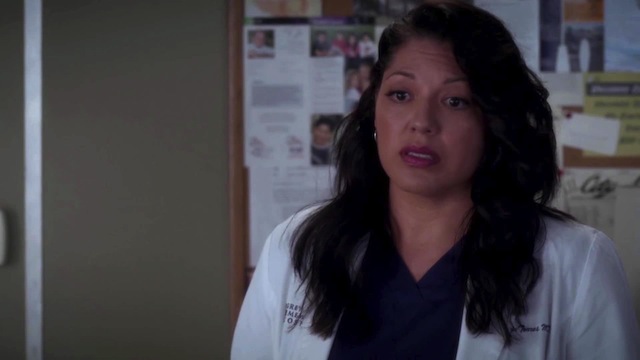 But it’s so late in the season to find a thick winter boo to cuddle up to.

Callie worried all of a sudden about what people think, even though every minute of their marriage has been on blast for the whole hospital to marvel at since day one, asks if Arizona has told anyone.

Real talk, name one person at Grey-Sloan Memorial that really gives a shit about anyone’s personal life anymore. There are just so many plane crashes and extramarital rolls in the sack that people can digest and still feel empathy. Grey’s has run its course. No one has ordered a Calzona in years.

Arizona hasn’t spilled the “we’re splittin up” beans. Callie asks her if she thinks they should tell people. 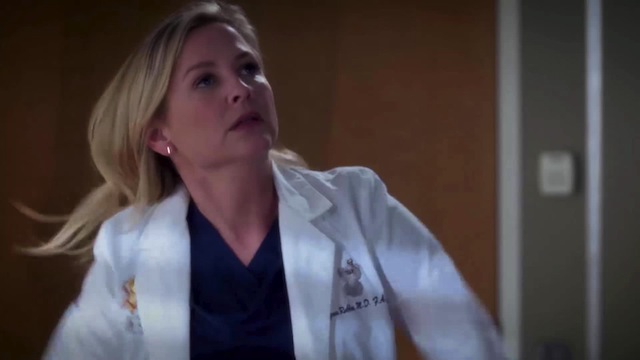 They be like Smooth (What?) Can you teach me how to dougie?

And this whole scene is just testing my patience. Just because the Great Pumpkin aired last week, doesn’t mean we’ve forgotten what happened two weeks ago. Callie gave all of us an Oscar acceptance speech about why she’s so free now and doesn’t want to be with Arizona. Why isn’t she zooming around the hospital on rollerblades while wearing a bikini doing a shoulder bounce for her freedom? 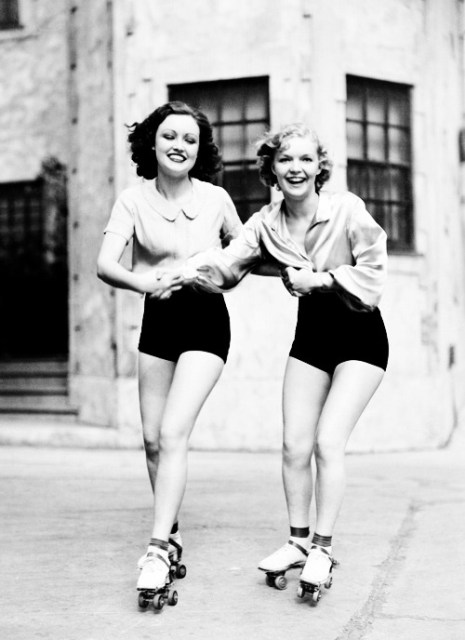 This could be us, Callie, but you playin’.

That’s the scene I want and instead we get a weird, anxious Callie asking Arizona if they need to send out an E*vite to their divorce party. Nena, go back to your corner, and keep on finding yourself. Callie pushes and gives Arizona one of the most hated lines in any relationship: “Fine, whatever you want.”

Whatever I want? Oh, word? You mean that? What if I want pancakes and a three-way?

Arizona: “I didn’t want any of this.”

Word, me neither. I’m tired too, Arizona. I want this:

But since we can’t have that right now, we get Callie and Dr. Ginger Hunt carving open a woman who’s been carjacked, and releasing her blood into the ether for their Illuminati sacrifice and a boost of Dr. Geena Davis Jr. and Arizona figuring out how to remove the mark of the beast from an unborn infant. 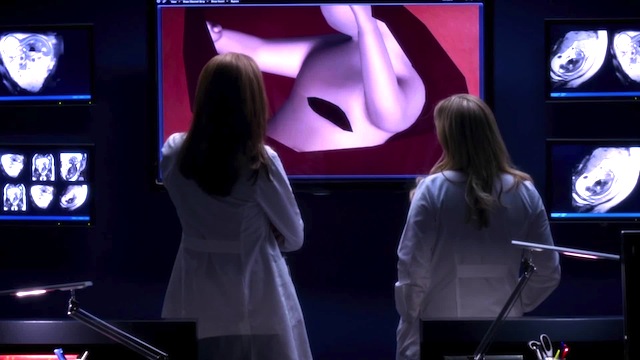 Come with me and you’ll be in a world of pure imagination.

Ay, they should be going for the gold with this neonatal crap. I want mutant babies that have x-ray vision, telekinesis, and pyrotechnics or something. Give me babies like Drew Barrymore in Firestarter.

The name of the baby their working on is Waldo Pfeifer, btw. Waldo. Pfeifer.

Arizona looks half as interested as I am. I really think homegirl is shell-shocked and her heart hurts and she should have taken a sick month or something. 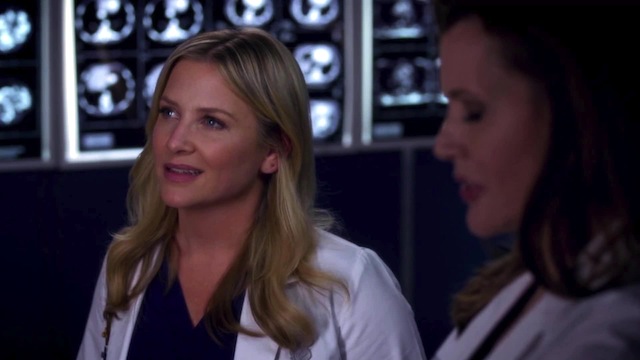 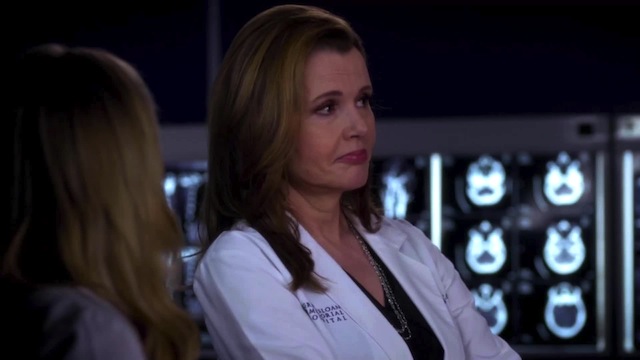 Noble pursuit. Lemme know if you need any help with those designs. I’ve got one inside of me right now.

Dr. Dottie Hinson puts the pressure on Arizona to be a good team member. Together, they’re going to play a few hours of Where’s Waldo to practice for this surgery. Normally, Dr. GD Jr. wouldn’t have time for funsies but since Arizona’s back to smoking massive amounts of mary jane before work, Dr. GD wanted to make sure they got some prep time in before the big game. 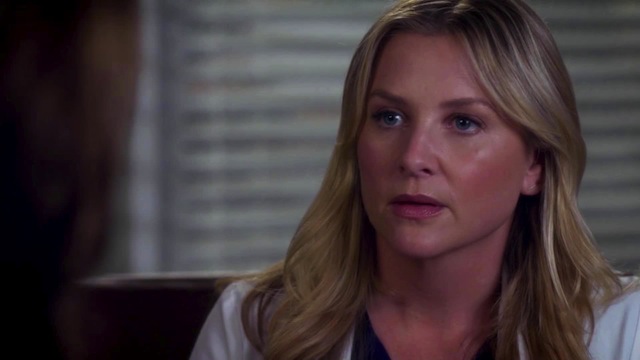 Wait, so you’re not gonna flog me at all in this episode?

Fresh from taking a blunt to the head, Arizona shows up with her Where’s Waldo books and Dr. Geena Davis Jr. cancels the play date, and heads off into the sunset. There’s gold out West and a fearless woman with her own horse can stake a claim and make something out of herself. Arizona is told to be a good girl and take care of all the patients. She is left with everything Dr. Dottie Hinson has ever written about neonatal surgery, transhumanism, and how to eat fried worms. 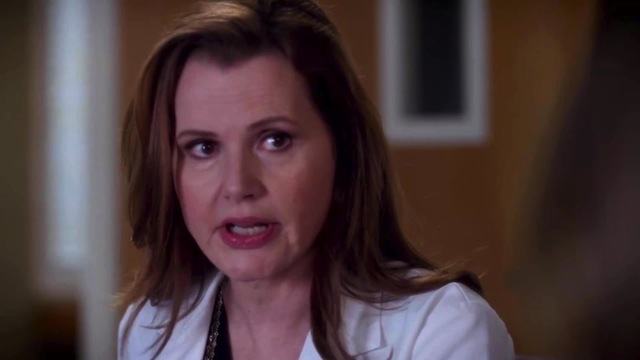 But if you give a mouse a cookie, it will never leave and that’s how lesbians get married.

Dr. GD will return in one fortnight to test Arizona’s knowledge of her work.

Let’s take a moment for some Dr. Derrick Shephard appreciation. He delivered the best line of the night and it must be shared.

When explaining to Meredith why he’d orchestrated a dinner involving Dr. New Gray, her half-sister, and Dr. Webber, he said the following:

“Zola needs more Black people in the family because I’m running out of ways to braid her hair and Bailey won’t show me anymore.”

Yes, yes she does. Zola deserves the world. She deserves all the hair styles and all the family members that look like her and every ounce of love possible. Also, Zola is one of the few children on this show that is actually played by a real child and isn’t just a ghost baby referred to in dialogue alone.

Anyway, back to the scraps of gay in this episode.

Arizona complains to Karev how hard it is to find Waldo. He’s as unsympathetic as usual. I think he grunts, scratches himself, and then spits near the book before walking away. 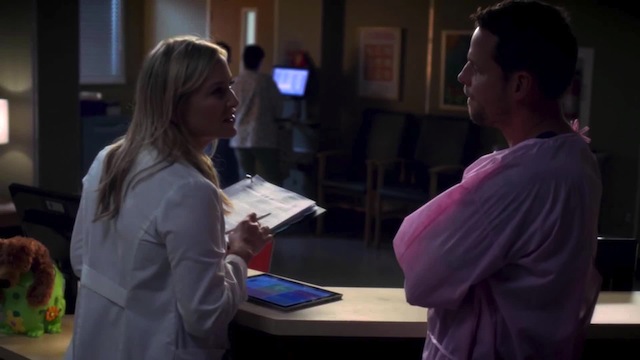 Yes, everyone notices when you rearrange your junk. And yes, it’s disgusting every time.

Damn but Callie looks fine and this shade of fuschia lipstick works for her. Get it girl. I’d say more about Callie and the veteran carjacking patient but Callie has very little to do with any of it. The patient has her monologue and Hunt swoops in to save the day because he’s a veteran too. At least this time there weren’t any weird crying/cuddle sessions between Callie and Dr. Ginger Spice. 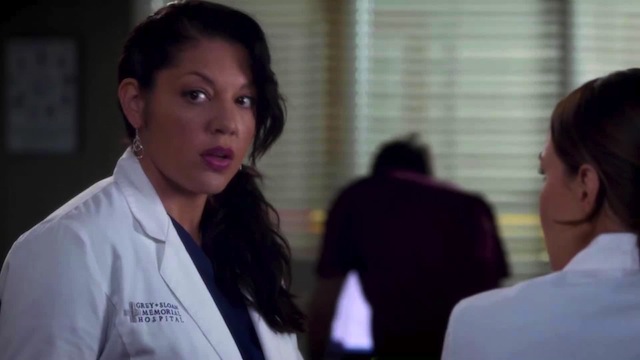 Hey girl, let’s destroy the patriarchy one kiss at a time.

Dr. Geena Davis Jr. brings Karev into the OR, as an observer. She begins her surgery with a threat to Arizona, cuz like threats keep people calm and focused. I know I learn best and perform well under massive amounts of intimidation and threats on my intelligence and ability. God, can someone please spoon her? Stressed and ready, Arizona slices and dices her way into a pregnant lady to operate on Baby Waldo. 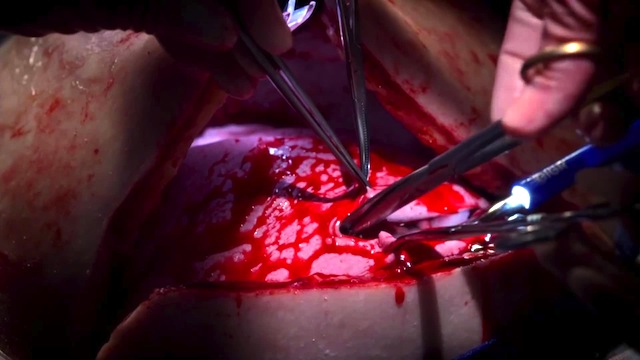 This is why I could never be a doctor. I’ve already fainted twice. 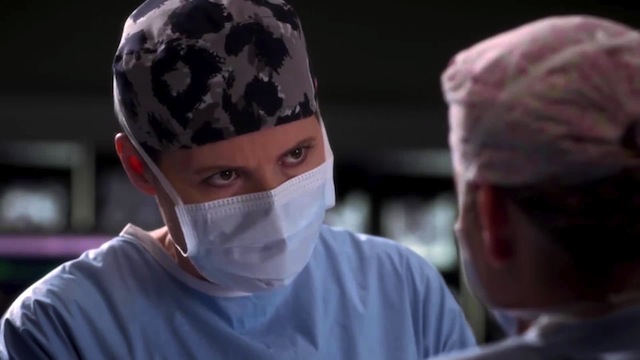 Everybody knows I’m a muthafucken monster.

Post-surgery, Arizona confides in Karev that her and Callie are livin la vida splitsville. She says she traded her marriage for the fellowship. The fellowship is all she has and there’s no turning back. No one is ever allowed to turn back. Karev tells Arizona to fight for her right to be a badass neonatal surgeon without taking shit from anyone. 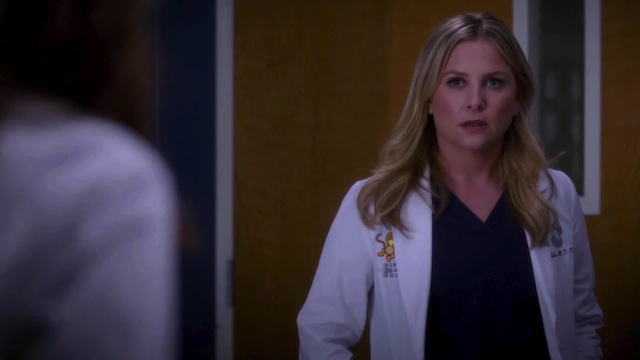 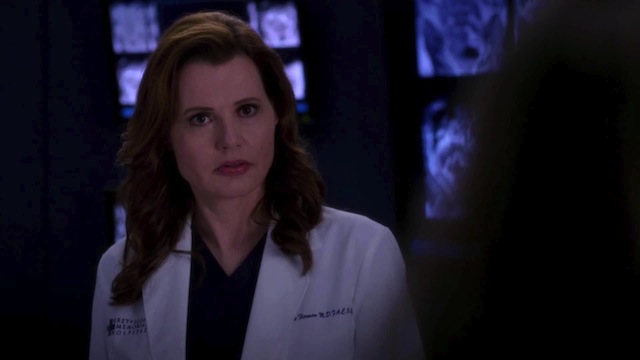 Bitch, you most certainly do not know my life.

And in one of the most basic plot twists of all time, torn directly from the pages of One Life to Live, All My Children and General Hospital, we find out that Dr. Geena Davis has…..

Where’s Erica Kane when you need her?

Is there hope for Calzona? Will we ever get Callie on rollerblades? Can she be a carefree Latin@? Will Arizona become the mad baby mutant scientist that Dr. Dottie Hinson wants her to be? Will one of them come down with amnesia and discover they were once conjoined twins?

Thanks for watching. These are the Grey’s of Our Lives.