Is it just me or is that a banana in your pocket/it getting hot in here? That’s probably because it’s June, but also because we have our next Autostraddle Calendar Girl ready for your hungry eyeballs! Guess who it is? Can you guess? I will give you a hint: if you were watching the Season 2 premiere of The Real L Word last night, you saw her in a scene doing this very photoshoot with Robin Roemer and the Auto-crew. We’re excited for this one, y’all.

Here’s something you need to know before you get to the good stuff:

You can buy our 2011 calendar for $5.
That’s totally a super cheap sale price AND when you buy stuff from us it helps us keep going.

Also, if you missed any previous amazing Calendar videos made by the one and only Kelli Griggs:
Kelli & Ashley are January/February, Luna & Michelle are March and Julie/Brandy and Stacee are April and May.

Our June lady is Francine Beppu: 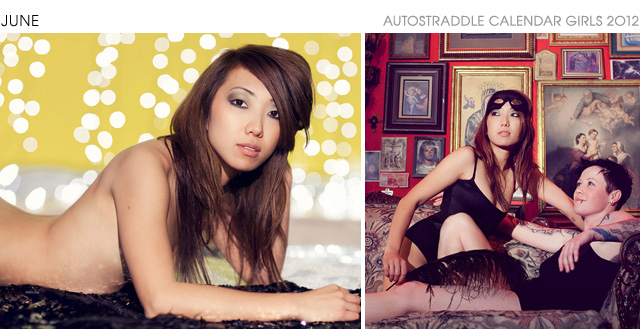 Robin Roemer, on working with her good friend Francine Beppu:

I’ve had the pleasure of knowing Franny, Co-Founder/Director of Business Development at NamiWave, since we worked together at Logo years ago. She’s a sweet girl, a great friend, a savvy business woman, and a really, really good time. After I asked her to be part of our calendar this year, I found out she was going to be a new cast member on The Real L Word. When the show’s production company asked if they could film our shoot, we took every measure to make sure we found a location where they could work with us, made sure the girls involved during that part of the day were ok with possibly being in the background of the show, and did everything we could to accommodate their schedule so they could use our shoot as content.

Sadly, the Network removed from the final edit the one thing we asked in return: exposure for Autostraddle and a credit for using me or my images on air. I’m still happy to have asked the beautiful Francine Beppu to be part of this calendar, because with or without a reality show, she is a fabulous and unique addition to this year’s calendar. I always knew she would make great TV and I’m excited to watch her on this season of The Real L Word.

So here it is!
We present the Autostraddle Calendar Girl Behind-the-Scenes video for June:

To find out what happened on Sunday night’s premiere episode, check out Riese’s recap:
Episode 201 – Fresh Start Body Parts!
NSFW! Possibly not safe for a lot of things, really.