Happy April! Uhhh, I mean May! OR BOTH! Alright, we skipped a month. Some things happened, like Dinah Shore and you know how these things go, right? We have remorse… but also we have a TOTALLY AWESOME combined double-video for April/May, hand-crafted by the magical Kelli Griggs because we would never leave you hangin’ gurl.

Now that I got you all hot and sweaty, don’t skip down to the video just yet… here’s some stuff you need to know:

You can buy our 2011 calendar for $15.
Also, if you missed any previous posts/videos:
Kelli & Ashley are January/February and
Luna & Michelle are March.

Some background: this is Round Three of Autostraddle’s Lesbian Calendar Girls: talented, smart, charismatic, geeky and really-really-good-looking lesbianisty ladies. We make this calendar for you because you all really need to cut it out with your crushes on straight girls, this shit is out of hand, the last thing you need is 12 months of whatever Maxim & FHM come up with. REAL LIVE LESBIANS!

Our ladies of April and May are: 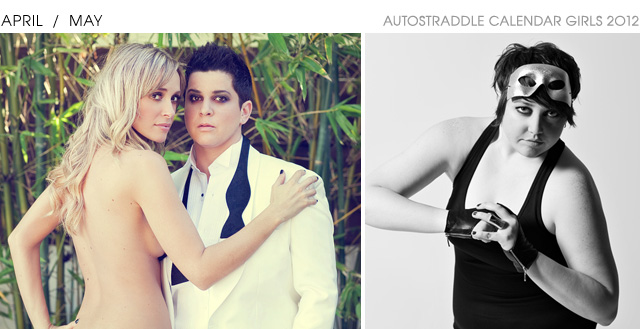 Brandy Howard [April]: Brandy Howard is the actress/model/writer who co-stars in the internet’s greatest webseries, “Julie and Brandy in Your Box Office” and the greatest movie never made, The Nicest Thing. In addition to her work as Ima Chickenwoman, the superheroine of Taco Bell’s Super Delicious Ingredient Force, Brandy has appeared in beer commercials for just about every brand of beer on the market. You may have also spotted her in film or TV appearances including Automatic, Just Shoot Me, Pandemic and Ditching Party.

Julie Goldman [April]: Julie Goldman is an actress/comedian/writer who co-stars in the internet’s greatest webseries, “Julie and Brandy in Your Box Office” and the greatest movie never made, The Nicest Thing. In addition to her work spreading offensive laughter to large groups of lesbians on cruise ships all around the globe, Julie Goldman starred in Logo’s groundbreaking mega-hit series, The Big Gay Sketch Show. Julie’s been on your screen doing stand-up on LOGO, VH1 and Comedy Central or doing acting in The Sopranos, Out at the Wedding and The D Word.

Stacee Coleman [May]: A music maven, Stacee has been a prominent radio disc jockey, a DJ (for MTV’s America’s Best Dance Crew no less), worked five years licensing songs, and continues to use her music publishing and licensing skills at her own company as the Vice President of Creative. 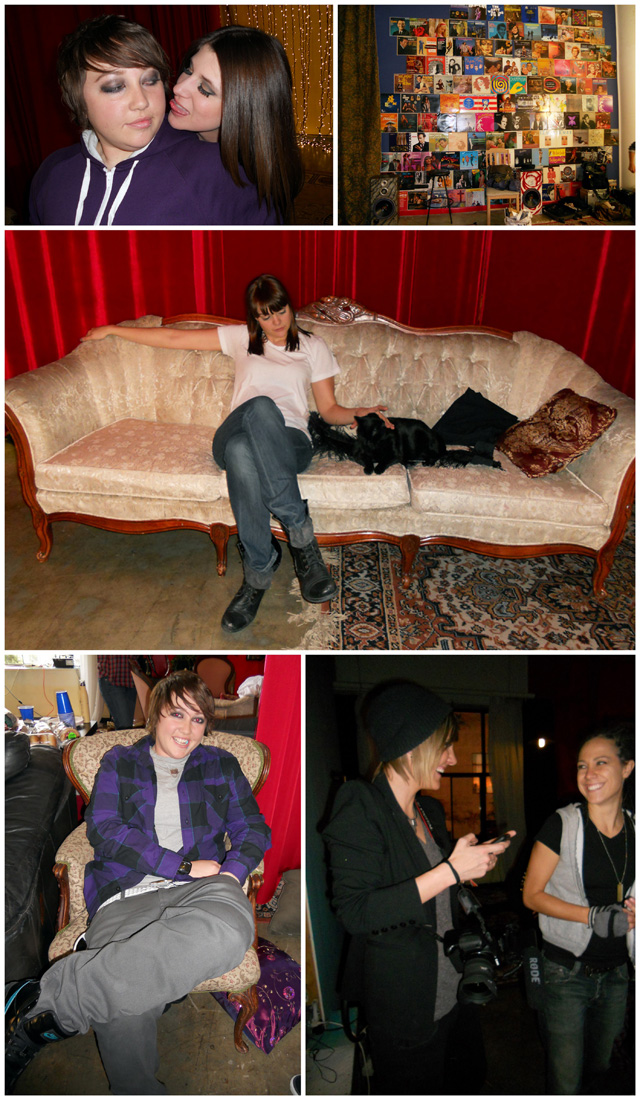 From top left to bottom right:
Stacee [May ’12] gets a little love from Jess [upcoming Sept ’12]; an awesome wall of records in the studio; Robin and a feline creature; Stacee [miss may!] hamming-it-up for the camera, our awesome film crew Kelli Griggs [Jan ’11] and Miss April ’11 Sarah Croce.

So here it is!
We present the Autostraddle Calendar Girl Behind-the-Scenes video for April and May:

Why? Well, we’re committed to making Autostraddle a safe place for progressive debate, but since you’re not allowed to say negative things about a woman’s body anywhere on this website, there’s really no on-topic argument to be had here. These girls are half-naked and gay, and they’re saying so on the internet in a public place, which is pretty fucking sweet — they’ve dealt with the same feelings of discrimination and difference that you have, been told that what their body wants is wrong. But everybody’s body is right. You are all beautiful, just some of you haven’t realized that yet.