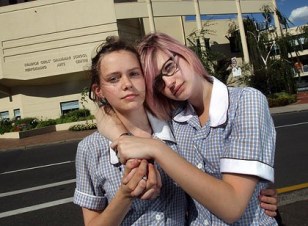 Remember that time Constance McMillen wanted to take her girlfriend to prom and her school said no? Probably because we wrote about it 150 times and also did that prom gallery thing. Anyhow, it’s happened again. This time, Hannah Williams, a 16-year-old at Ivanhoe Girls’ Grammar School in Australia, was told by a teacher that she couldn’t bring her girlfriend, Savannah Supski, 15, to the school ball, but was told to bring a boy instead.

In an interview with the Sydney Morning Herald, Williams said, “‘It made me very upset. I thought it was unfair so I didn’t go. I put a lot of effort into trying to fix things. I had meetings with principals; looked through the Equal Opportunity Act; all my friends put posters up around the school and the teachers ripped them down. There was an easy solution; they just needed to let me go with my girlfriend.”

In September, Williams’ father lodged a complaint with the Equal Opportunity Commission, saying the school has discriminated against his daughter who doesn’t, as the school keeps suggesting, want to go to an event where she “can meet boys in a social scenario.”

According to the SMH, the school principle, Heather Schnagl, said the event was not discriminatory: “I don’t think it’s appropriate they feel discriminated against, and I’m very upset they feel that. If we opened it up and said girls could bring another female they would all bring females; the policy is trying to create an event where boys are invited. We are a school that has an all-girls environment, and they are meant to invite guests, not partners.”

Now, both Williams and Supski have changed schools (Williams was pleased to find a “more accepting” government school, and Supski has transferred to be with her), with the support of their parents. (@advocate)

Obama spent three years in Jakarta, Indonesia when he was growing up, and visited again yesterday after rescheduling a planned trip three times. Aside from revelations about the young “Barry” being remembered by neighbours as the “boy who runs like a duck,” and for his nanny:

“His nanny was an openly gay man who, in keeping with Indonesia’s relaxed attitudes toward homosexuality, carried on an affair with a local butcher, longtime residents said. The nanny later joined a group of transvestites called Fantastic Dolls, who, like the many transvestites who remain fixtures of Jakarta’s streetscape, entertained people by dancing and playing volleyball.”

New York Senator Tom Duane was arrested yesterday evening at a protest at city hall meant to draw attention to a housing bill that would have ensured that those living with HIV/AIDS would not have to spend more than 30 per cent of their total income on rent. Duane, who is openly gay and HIV+, helped the heads of several AIDS organizations hold up traffic for over ten minutes before being arrested by waiting police. (@joemygod)

A new study from UCLA found that none of the 78 adolescents raised in two-Mom households reported any physical or sexual abuse. In contrast, 26% of American adolescents report caregiver physical abuse and 8.3% report sexual abuse.