When I first pitched the idea of a record club, I honestly didn’t expect such a good response. But there it was, there you were with your enthusiasm and excitement and cracking suggestions for albums to be discussed – including but not limited to new releases by Holly Miranda, Kaki King, Robyn, M.I.A and even La Roux, who already ignited some interesting debate. Some of these records will hopefully be discussed in the future, like maybe next month.

Some of you were open to my suggestion that we slap on some body glitter and discuss Ke$ha / Animal, but don’t fear – while leading an intellectual discussion about this artist has been a long-time dream of mine, the majority has spoken and so we’re not going to go there, at least not today. Nor will I ask you to talk about the soundtrack to certain abstinence-lovin’ movie franchise even though I really do believe in its music.

So, the first record we’re going to discuss is The ArchAndroid by Janelle Monáe. 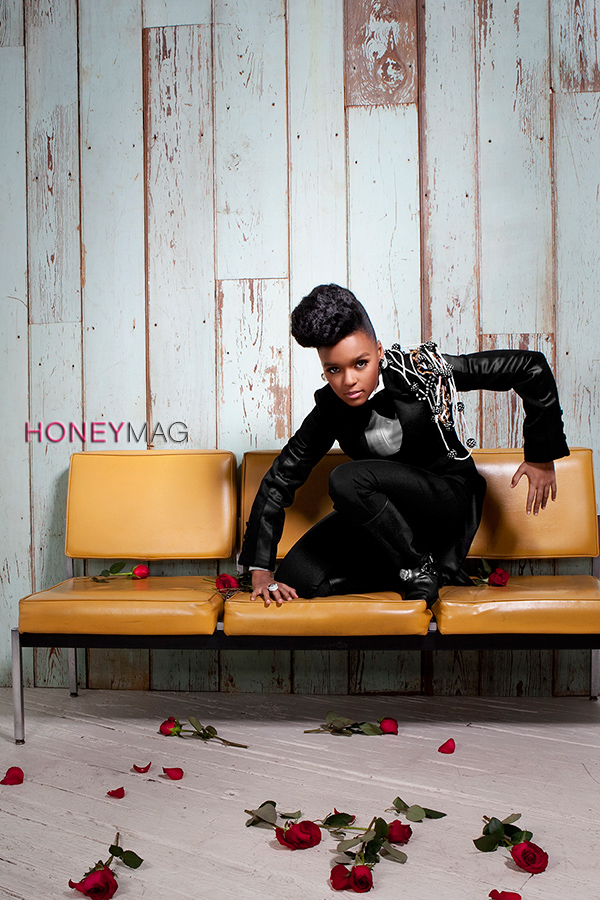 Janelle Monáe is a Kansas-born, 24-year old, androgynous, tuxedo-sporting, queer-supporting, soul-oriented, alternative singer/songwriter, dancer & performer who recently took out the #1 position in our list of the Top 10 People Who Can Do No Wrong. She really can’t. If you haven’t already, you really should read this article written by our editor-in-chief Riese on why Janelle Monáe is the future.

One thing that did ring clear was that a lot of you are interested in broadening your musical horizons, listening to some albums that you might not otherwise have picked up. That’s why I chose Janelle, an artist who’s received widespread praise from music critics but as Jezebel has pointed out, flies under the radar and sadly misses out on the commercial attention enjoyed by her headline-grabbing peers.

Things to consider (in the near-future!):

The ArchAndroid is an epic, 70-minute long record featuring 18 tracks, which is a lot for anyone to process, including me. So rather than break this down track-by-track, I’m just going to throw out some broader questions that you may or may not want to consider while listening to the album.

* The ArchAndroid pulls in elements of Afrofuturism and science fiction to tell a story about a messianic android. But if you weren’t told there was a concept, would you be aware of it?

* The album crosses genres, it’s a cyberish mash-up of pop, soul, funk, R&B, hip hop, rock and everything else. Has such an epic exercise in genre-bending resulted in a truly unique sound, or a total train wreck? Is the creativity too ambitious, or has it hit the mark?

* Janelle has been called a visionary, a truly innovative artist who’s breaking boundaries with her musical style and producing sounds that haven’t been made before. Would you agree?

* “Tightrope” feat. Big Boi is the album’s first and only single (as yet). Do you think it is the strongest track? What are the stand out tracks for you?

* Is this album and artist too outlandish for commercial success? Is there such a thing? Or maybe you have another theory for her lack of buzz in the mainstream market.

* She looks really hot in a tuxedo, right?

Obvs you need to get the album. If you don’t already own The ArchAndroid, you can pick it up online via the links below, or at your local independently owned record store, if you have one! Or you could look up the track listing and listen to the songs on Myspace. Just pleasepleaseplease don’t illegally download it.

Also, if you’re not going to support an independent record store and rather intend to support “the man,” please consider doing so using the links below, because if you do, you’ll be sending a share of the profits to Autostraddle. It’s only a small slice but with hosting fees & operating costs like ours, every cent helps.

And if you already own the record, don’t share your feelings just yet. If you have questions you want to discuss later on, let me know, but don’t you dare try to answer them or give away the ending about the monster at the end of this book! We’re going to meet back here in two weeks, or thereabouts, and process this album then. I’ll also announce which album we’ll be discussing next time so we can streamline this bitch.