Today a three-judge panel of the 9th U.S. Circuit Court of Appeals in San Francisco issued an order to block the U.S. military from continuing to enforce “Don’t Ask Don’t Tell.”

You’ll be glad to know that Dan Choi, at last, is happy:

You may recall that U.S. District Judge Virginia Phillips declared the military’s ban to be unconstitutional in September 2010. You may also recall that the Senate passed and Obama consequently signed into law legislation lifting the 1993 policy on December 22nd, which was a sad day for John McCain and a happy day for everyone with a soul.

That legislation promised the American People that the new rules would be put in place in “a matter of months.” But whether or not DADT was still being enforced while the military “readied” itself for the gay invasion has been a source of contention and confusion and frustration.

Today’s ruling is the result of a case filed by The Log Cabin Republicans. The panel ruled unanimously that in light of the Obama administration stating that it is unconstitutional to treat gay Americans differently under the law, the ban must be lifted.

The Log Cabin Republicans’ Executive Director on the impact of today’s ruling:

“The ruling by the 9th Circuit in Log Cabin Republicans v. United States removes all uncertainty – American servicemembers are no longer under threat of discharge as the repeal implementation process goes forward. As a captain in the United States Army Reserve, I have observed the reactions of my colleagues to the Department of Defense’s move toward open service, and can say with complete confidence that our military is ready, willing and able to take this step. Log Cabin Republicans are proud of our role in ending this unconstitutional and un-American policy once and for all.”

“With the wait for certification dragging out beyond a reasonable time frame, the Court has once again stepped in to require the Pentagon to stop enforcing ‘Don’t Ask, Don’t Tell,’ and this time it very well may be for good. I am proud to have worked personally worked with Log Cabin on this case for more than five years now and to have represented the gay military community as the sole named veteran on this lawsuit. Despite the criticisms and years of waiting, this case has yet again successfully eviscerated this outdated, harmful, and discriminatory law.”

“We will will of course comply with orders of the court, and are taking immediately steps to inform the field of this order. In the meantime, implementation of the DADT repeal voted by the Congress and signed in to law by the President last December is proceeding smoothly, is well underway, and certification is just weeks away.”

The Circuit Court’s brief said “the process of repealing (the policy) is well underway, and the preponderance of the armed forces are expected to have been trained by mid-summer.”  In the mean time, all current investigations underway should be suspended. 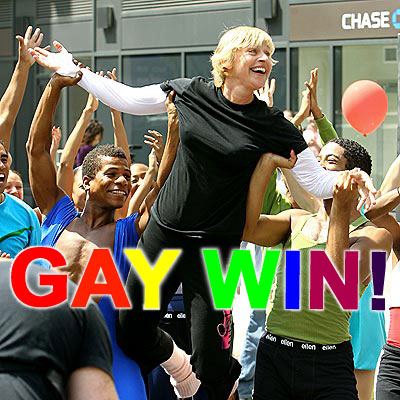