So many things happening relating to this Don’t Ask Don’t Tell repeal. Let’s check them out.

President Obama signed the act! The one that will let gay people attend military barbecues! People chanted “Yes we can!” and cheered and thanked him and it was a big heartwarming moment.

Pam’s House Blend has published a compilation of everyone’s reactions to the signing, from Servicemembers United to The Gay and Lesbian Community Center of Southern Nevada. Basically everyone who’s intelligent, forward-thinking and level-headed is really, really happy today.

If Dan Choi looked any happier in this photo, we’d probably all join the army or something: 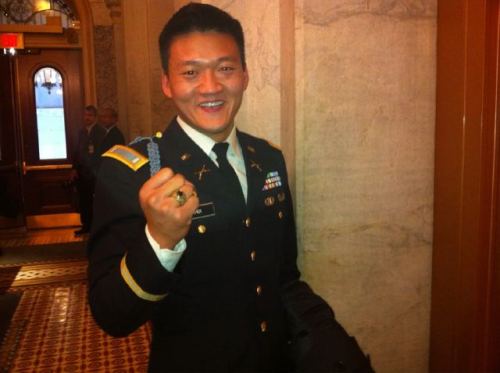 Ok so, ROTC programs were banned from Ivy League campuses during the Vietnam War, according to like, every major news source. The ban has been upheld for the past 17 years with the universities claiming that DADT was the reason for the ban. But maybe none of that is true? Because there’s also the argument that “ROTC did not meet the academic and professorship requirements of academic courses, so Harvard relegated ROTC to an extracurricular. The ROTC walked.” Are you confused? Me too!

Either way, now that DADT is no longer a thing, the ROTC will be coming back to these universities and everyone involved thinks this is a super good idea on paper but will be maybe kinda awkward IRL.

3. John McCain is Still a Thing

“Railing against Don’t Ask Don’t Tell, shooting down an immigration bill he once sponsored, pushing his own changes to START—the tougher John McCain who emerged in the primaries may be here to stay.” Oh yay. 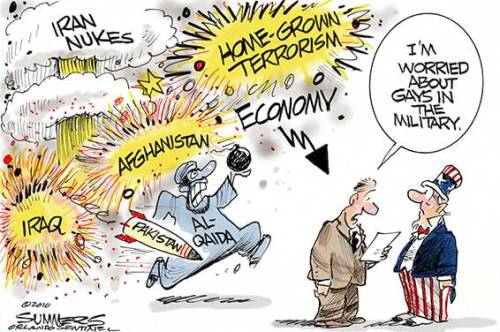 4. But Wait What About THE NATIONAL GUARD WAIT WAIT

Some really interesting man by the name of Bob Marshall would like to ban gays from serving in the Virginia National Guard. And then Governor McDonnell was like, “Bitch you crazy!” No he actually said, “while I disagree with the action that the Congress took, based on my own experience in the military […] we can’t have two systems — The Federal and National Guard.” I mean, at least one of these men isn’t as bigoted as the other one, right? It’s the little things.

5. Now That Gays Are Real People in the Military, Can I Marry Tegan?

You’re probably thinking / hoping that the repeal of DADT might signal a more progressive view on gay people in general and therefore we can expect more basic rights, like marriage and the tax-related perks that come with it! You might be right and you might be wrong. Everyone has an opinion about this! It’s like the great toilet paper debate. (@theweek)

6. Obama Has Lawyers Who Will Tell Him How to Feel About DOMA

The Advocate has Obama’s first one-on-one interview with an LGBT news outlet., in which he discusses the speed of DADT repeal implementation and how proud he is of everyone, especially himself, for getting rid of DADT. Obama is, however, still really confused about his feelings on gay people having the right to marry other gay people and currently has a slew of lawyers “looking at a whole range of options.” Hm. Neat.

The lame duck session is supposed to be a time for naps and vacations! But Democrats have managed to get quite a few things done in the last few weeks, and Republicans will likely want to do something to restore balance to the force. Like, you know, be total assholes next year. (@csm)

Rachel Maddow did a little bit on Don’t Ask Don’t Tell on December 20th — she opens with a recap like the clips show they have in the middle of every season in America’s Next Top Model and then she announces to the crowd of people (those lucky few who got tickets for the 92nd Street Y Rachel Maddow Live thing that’s happening in New York this week before they sold out) that we won the vote and everyone cheers and then there’s a panel with Katie Miller, Victor Fehrenbach, Mike Almy and etc.

9. People Still Have a Sense of Humor

Let’s take a moment to appreciate Barney Frank owning this interaction with a reporter from The Media Research Center, which is a group dedicated to spreading douchebaggery by “exposing” “liberal media bias.”