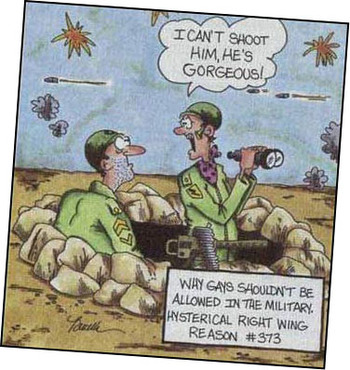 I know right? Harder than you thought. Anyways, the correct answer is (sort of) b. In actuality, the legislative repeal is the ONLY part that’s official; the problem is that Army officials haven’t signed off yet on the Pentagon’s ‘review’ of how best to implement it, and so no changes have been made so far. That doesn’t mean nothing is happening, though! Pam’s House Blend has a solid roundup of what each service branch is up to (and by “each service branch” I think I just mean two, apparently there are five total? Who knew?) as far as beginning the implementation process. Here’s the basics:

+ The Servicemembers Legal Defense Network is calling for the Department of Defense to create Special Boards to deal with the logistics of reinstating people back to the army who were discharged under DADT – correcting their records and processing their applications to re-enlist. “Creating these Special Boards will be one of the first important steps the Defense Department can take to help former service members who were harmed by the DADT law,” said Aubrey Sarvis, Army veteran and executive director for Servicemembers Legal Defense Network.” You can see their letter addressed directly to Defense Secretary Robert Gates here.

+ In the Navy, a complicated training program that I don’t understand will be instituted. It has THREE LEVELS:

1. Commanders, executive officers and command master chiefs will be trained by “mobile training teams” of experts and fleet representatives. These leaders, in turn, will be expected to train their commands.

2. All hands will receive instruction on the new policy and expectations for personal behavior. In cases in which sailors are assigned to non-Navy units or are unavailable, they will complete the training with their parent command or online.

3. Separate training will be provided to those who will enforce or support the new policy, such as recruiters, judge advocates and chaplains.

What does anyone need to be trained to do when they have in fact been personally behaving around gay people (albeit some closeted ones) forever? And what does the process entail? I don’t know. Here, here is an older white man in a uniform to explain it.

OutServe, an underground network of enlisted queers, has revealed this internal communique about implementation repeal, which is remarkable both in its surprisingly sincere tone and in how much it sounds like the speech of a robot overlord.

A TIERED APPROACH TO ENSURE PERSONNEL RECEIVE THE APPROPRIATE LEVEL OF TRAINING. THE CENTRAL MESSAGE OF THIS TRAINING WILL FOCUS ON LEADERSHIP, PROFESSIONALISM, DISCIPLINE, AND RESPECT.

A. LEADERSHIP. This is a major policy change and focused leadership is required to set conditions for success for unit cohesion, readiness, and the effectiveness of a given command. Frontline leaders are tasked with building unit cohesion and maintaining readiness in a diverse force to meet mission requirements. By providing leaders at all levels with accurate information, we enhance our ability to ensure a smooth policy transition with minimal disruption to the force.

B. PROFESSIONALISM. We have taken an oath as military professionals to support and defend the Constitution of the United States and we are committed to our navy core values. Emphasizing these professional obligations in a post-repeal environment will reinforce expectations of personal behavior and will help reduce any impact a policy change may have on our effectiveness.

D. RESPECT. As leaders we must focus on our values and Navy traditions as the foundation for maintaining the strength of our force. Central to that strength is treating all people with respect and dignity regardless of sexual orientation.

A more complicated question is what the situation is with current discharges; technically they haven’t ceased, and it’s hard to find information on whether anyone has been newly discharged since the legislative decision. It seems like that would be counterintuitive, as someone would probably eventually have to go to the trouble (and money) of re-processing the same person, but the military is a mysterious beast. If anyone does have personal insight or experience with this question, feel free to share.

The good news about the military is that regardless of how its leaders may feel as individuals, they are deeply committed to obeying orders even if they don’t like them, and to taking an action-oriented approach to problemsolving. These documents give us some hope that after everything it took to get this repeal, things may be downhill or at least slightly inclined from here on out. Let’s hope that we can have at least one successful military endeavor in our time, and that it can be one that’s about restoring human rights peacefully and with (relative) grace.