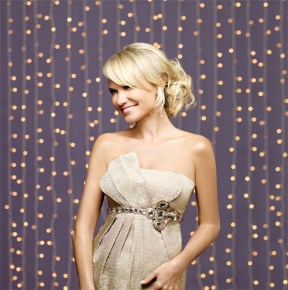 We were thrilled to learn that Kristin Chenoweth is the 2011 recipient of the Vanguard Award, presented annually at the Los Angeles GLAAD Media Awards to honor a member of the entertainment community who has made a significant difference in promoting equal rights for LGBT people. You probably remember back in May when the Newsweek/Ramin Setoodeh soap opera first began that it was K.Cheno who publicly stood up for gay actors -namely her Promises, Promises co-star Sean Hayes– when Setoodeh claimed that they can’t play straight.

But here’s where it gets interesting! Kristin actually consulted with our hero/Editor-in-Chief Riese when composing her response to Newsweek and it was Autostraddle who first broke the article to the media, so we consider this a big win in a lot of ways! After our post went live, it was picked up by nearly every media outlet on the web including the New York Times, The Huffington Post and E-Online. It became a topic of debate on The View, The Today Show and The Joy Behar Show and inspired an all-out Newsweek boycott from Glee creator, Ryan Murphy.

Prior to Kristin’s response, Setoodeh’s “Straight Jacket” article mostly just pissed off a bunch of gay bloggers but when Kristin spoke out it became something of a media phenomenon and most importantly put the spotlight on this very real Hollywood fear that is preventing tons of gay actors/actresses from coming out.

Kristin is a longtime supporter/lover of the gays and actually marched with Autostraddle in the National Equality March back in October 2009. I interviewed Kristin last summer, after the media storm quieted down to chat about her return to Glee, her brand new ensemble TV project, her strong Christian faith and her feelings about the overwhelming coverage of her Newsweek response article.