It’s our 38th Autostraddle Anonymous Sex Toy Review! Over the last few years, sex toy companies and stores have propositioned us, wondering if we’d like to review their toys in exchange for, you know, their toys. We’ve decided to start saying yes to the dress. 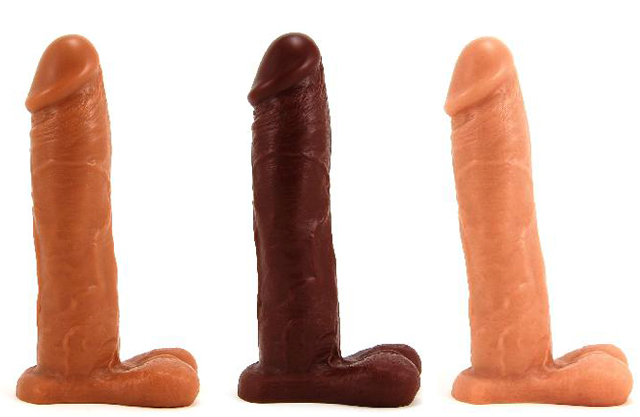 Objects in mirror may be more fucking enormous than they appear.

If you visit the Outlaw in a sex shop — and if you’re thinking about this one I really suggest you visit it in person first, since words alone cannot describe it — you will see all the other Vixen Creations toys in lovely plastic tubes it is possible to turn into dinosaur terrariums or use for long-term toy storage as intended, and then you will see the Outlaws, wrapped in industrial plastic, presumably because it would not be practical to fit them into containers.

The Outlaw is big. Really big. You just won’t believe how vastly, hugely, mind-bogglingly big it is.

You also won’t believe how amazing it is.

My activity partner pointed out that the base would be hidden by her harness (the Spareparts Tomboi), which was true and excellent and got me over 90% of my dislike of the base. Her wearing it got me over the rest. (Relatedly, in the right pair of pants, it’s theoretically possible to pack with the Outlaw, but probably not without causing a sexy riot.) I have also since developed the theory that the Outlaw wouldn’t be able to stand on its own for storage without a larger base, and instead of random silicone, the manufacturers went for “realism.” In any case, after one use, I stopped wanting to make adjustments with a sharp pair of scissors. The larger base also means a wider pressure against the wearer, which can be really, really good, and makes it easier to hold.

As for the color, I am having a private moment of silence for the neon-green and tie-dye VixSkin of yesteryear.

Another point of hesitation, but also of intrigue, was the size. It’s really big. Would it be too big? (No.) Would it even fit? As it turns out, most of the time, the answer is an emphatic “yes.”

The Outlaw makes me feel really full in a way that is really, really good (and, especially at first, really intense). I come easily and often and over and over. Even being totally in love with it, though, there are some days when it’s just too big. (Which is fine, that’s what the Mustang is for.)

The Outlaw is big, and it might take some getting used to, but you can have so much fun getting used to it. The very first time, my activity partner and I went really slow and used one-third of a bottle of lube and just kind of paused for a moment while my muscles adjusted. Five minutes later I came harder than I ever had in my life.

Out of a harness situation, I found it impossible to insert all the way without hitting my cervix, but that meant the base is further away from me, leaving room for a vibrator. It’s more or less the same thickness all the way, which is great if you don’t like g-spot simulation. (Angled just the right way, it can be a little g-spotty. If that’s your goal this is not your toy, though the Buck might be.) It’s also long enough and thick enough to stay in place where other toys wouldn’t in almost all but the most enthusiastic positions.

VixSkin as a material is way, way better than anything that has ever been inside of me. The dual-density silicone is spongy and almost sticky on the outside, but with a hard core so you can actually fuck with it. The material makes the Outlaw more comfortable to take — after a bit of adjustment, smaller toys made of harder silicone actually seem to feel bigger. It’s non-porous, and can be cleaned with anti-microbial soap and water, in the dishwasher or by boiling for three minutes, though none of my pots are big enough to fit it. It’s cool to the touch, but you can warm it by running it under warm water, boiling it or microwaving it for 30 seconds before use.

Even though I started being intimidated by the size, that feeling went (mostly) away after using it a few times. I was expecting the Outlaw to be a special occasion cock, and instead it’s the one I want to fuck with at every possible opportunity.