It’s our twenty-ninth Autostraddle Anonymous Sex Toy Review! Over the last few years, we’ve been propositioned frequently by sex toy companies wondering if we’d like to review their toy in exchange for, you know, their toys. In 2011, in addition to “saying yes to the dress” we started saying YES to the sex toys!

Anonymous Writer A: So the experience taking it out the packaging – did you have as big of an experience as I did? Because, like, mine was an experience.

Anonymous Writer B: I had a big experience but I’m guessing a very different one. You go first.

And my girlfriend was like, “Well. It matches your soul.”

Anonymous Writer B: Then did you put it in your vagina?

Anonymous Writer A: No, I put it in her vagina. I’m not really into putting things in my own vagina at the moment.

Anonymous Writer B: Valid. It matched your soul and her vagina.

Anonymous Writer B: Well I opened up the packaging and was immediately like, “Shit.” This is my ex’s dick. Yeah. I accidentally got my ex’s dick. Like what am I supposed to do with that?

Anonymous Writer A: Put it in your vagina?

Anonymous Writer B:Well yeah that’s what I did. Actually my ex and I ended up fucking later that week because I have no self control and we used both of them.

Anonymous Writer A: Wait, what does yours look like? Your dick, not your ex. 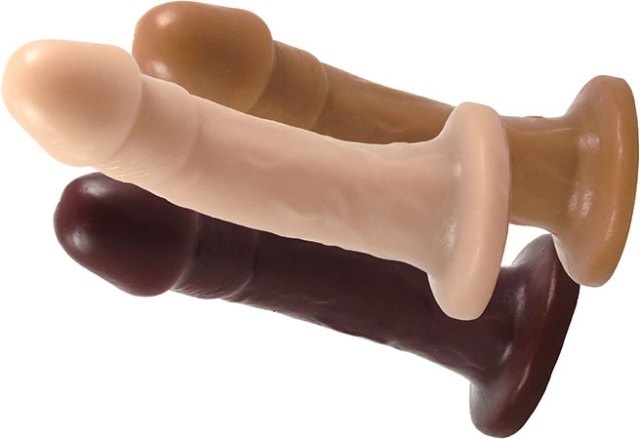 Anonymous Writer A: Shall we talk about using them, then, since you seem to have a good story?

Anonymous Writer B: My ex’s is also flesh colored though. And also my ex is flesh colored. Just for the record.

Anonymous Writer B: Oh right. So obviously I fucked myself with it first because I always try sex toys out alone first for two reasons:

1. I like to make sure I like it and figure out how I want to use it before I get a partner in crime involved.

2. I can’t wait once I have it in my hands to rip it out of the packaging. YOU KNOW WHAT I MEAN!?

Anonymous Writer B: So anyways later my partner-in-crime and I met up for some sex time. And she was like, “This is my dick.” And it was awkward because it looked like I’d bought the dick to look like hers and it made me look really weird and clingy. But it was okay because we both agreed it’s really the best dick. Oh! There’s some reviewing. I think the Mustang is like the perfectly sized dick for my vaginal canal.

Anonymous Writer A: Yes, my girlfriend felt the same. And the texture! Oh my the texture, but I’ll get to that when I tell my story.

Anonymous Writer B: My ex has a bigger other dick and I have a smaller other one but we never use either of those. We just use the Mustang. And when we fucked the other day we used both. Like she strapped on using mine and fucked me with it and I strapped on using hers and fucked her with it. But you’re probably asking yourself, “Are you sure you didn’t mix them up?!”

Anonymous Writer A: Yes, what did you do to keep them straight? (Haha. Straight.)

Anonymous Writer B:Well actually, my ex bought her dick a few years ago and Vixskin changed the material slightly since then, so my dick is softer, slightly lighter colored and stickier. Her dick is sort of more firm, dark and dull.  I actually preferred the older material but I think that’s all just wrapped up in my fucked-up headspace about my old relationship. But regardless I think the Mustang is like the perfectly sized dick both for receiving and giving. It’s got a good weight to it for fucking. I think it’s a good size for getting fucked with, too. It’s just big enough that it gives you a little stretch and pressure when it goes in, but then once the tip sort of gets past your pelvic muscles it slides right in. I felt very filled. In a good way. But also it’s has a nice curve to it. Sometimes dicks are too curved and I just don’t want that much G-Spot stimulation while being thrusted at.

Anonymous Writer A: OMG, WAIT, DO YOU WANT TO KNOW WHAT I LEARNED RECENTLY?! It has to do with the curve. Okay, so I never ever thought to do this, someone told me to do this: if you’re fucking doggy style, turn the cock around. Like, turn it so it curves down. I never knew to do that before! I felt so foolish! Like, of course! Of course you turn the fucking cock around, wtf?!

Anonymous Writer B: Yeah I do that all the time. How did you miss that?

Anonymous Writer A: Me too, which is why I was so shocked that I missed that day in queer school.

Anonymous Writer B: Although I prefer the term “doing it from behind.” Okay tell me about you using it.

Anonymous Writer A: So, my girlfriend and I were having trouble with my cock. We had purchased a Double Agent for pack and play purposes, and while it’s an okay cock, it’s not splendid for either pack or play. Kind of like multi-functional printers or text books that try to cover too many topics or something. We’d been fucking with that one for a while and recently my girlfriend was like, this is really starting to irritate my vagina – like, the texture’s off, I feel like there has to be a better alternative. I was like, yeah, there is definitely a better alternative and it’s Vixskin. Back when I was super into penetration, Vixskin was what I liked to put in my vagina, so we decided to give this one a try. You’re right about the size – we were so keen on the Mustang because it’s not too big, it’s not too small, it’s juuussst right. And the texture on anything by Vixskin is just, like, wow. Yeah, it feels a little sticky coming out of the package, which can be weird. But just throw some water-based lube on it and it’s the best skin alternative silicone evah! It’s nice and slide-y.

Anonymous Writer B:Wait this was only your second dick?

Anonymous Writer A: No, no, I had other dicks, I just lost them in my last breakup.

Anonymous Writer B: Ahhh, of course.

Anonymous Writer A: Like, for whatever reason, my ex got all the dicks.

Anonymous Writer B: That sucks.

Anonymous Writer A: My ex was a bit of a dick, so maybe this makes more sense than I think.

Anonymous Writer B: I’m a firm believer that you should always buy your dicks to fit yourself (if you’re into that sort of thing) which is why my other dick was pretty small. But then I wanted to upgrade. The only thing about Vixskin is that I hate not being able to use silicone lube.

Anonymous Writer A: Yeah, but using Vixskin plus a good water-based lube is super fucking awesome.

Anonymous Writer B: I’ve heard you can use silicone lube if if it’s of a different chemical compound than Vixskin. You can test that on the bottom of the dick and if the silicone is going to wear away, it will on the base. But I haven’t found one it doesn’t mix with. It’s okay to use Liquid Silk, though, which is half waterbased half silicone. It’s a mixture but it doesn’t react with the silicone.

Anonymous Writer A: I’m usually in the camp of “don’t chance it” with the silicone lube.

Anonymous Writer A: Especially because water-based lube has gotten so good. Anyhoo. Any-hooha. I crack myself up.

Anonymous Writer B: What did you think about fucking with the Mustang with regard to thrusting?

Anonymous Writer A: Some cocks are just a bit too short and while thrusting, those too-short cocks sort of pop out and then you keep thrusting and you poke that person in some place that isn’t where they were expecting. But this one – good length. Doesn’t really pop out on the out thrust, not long enough that you unintentionally hit a cervix on the in thrust. Juuuussssst right. We tried a bunch of different positions with exuberant thrusting and it wasn’t one of those cocks that just had a mind of its own.

Anonymous Writer B: Oh, actually I was going to say the only drawback to this dick is that sometimes it hits my cervix. But anything smaller and it falls out and I get unsuspectingly poked in the asshole as you mentioned.

Anonymous Writer A: Okay, so cleaning this. So easy, right?! I mean, my girlfriend and I are fluid bonded, so we just use toy cleaner most of the time. But, like, even if you don’t use a condom, you can boil this thing and it’s totally good!

Anonymous Writer B: You can also just wash it with soap and water. Antibacterial soap or Cetaphil is actually fine too since it’s nonporous.

Anonymous Writer A: I’ve named my car and my cock, but not my tits and my cunt.

Get your mustang at Babeland, either in the store or online! And if you’d like the special edition one (not the super pink one!) you can get that as well. Happy Anniversary, Babeland!