It’s our 46th Autostraddle Anonymous Sex Toy Review! Over the last few years, sex toy companies and stores have propositioned us to review their toys in exchange for, you know, their toys.

This week, two of our anonymous reviewers tried out the We-Vibe 4, available at Lovehoney. 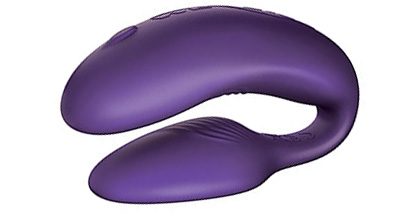 Two anonymous reviewers discussed the We-Vibe 4 over email and g-chat. Though we were both initially excited about the toy’s concept, neither of us was impressed with the execution.

Reviewer 1: Was it not great for public things because of the fit? Or another thing?

Reviewer 2: It was so loud! But also the fit. It slipped out of me. The flexibility of it was too tense and it wouldn’t just stay open.

Reviewer 1: YES. As if the tension of the little connecting middle bit was too strong.

Reviewer 1: Also we are both kind of small people, I feel being a not-as-small person would make it even worse.

Reviewer 2: Yeah, for sure. That’s a really good point.

Reviewer 1: But also, even though it wasn’t flexible enough, it seemed it also wasn’t tight enough where it needed to be. Maybe it would have been better if it worked less like tongs and more like pincers? I mean, how did you find the placement?

Reviewer 2: The inside placement wasn’t long enough. I feel like the designer was like, “This will hit the G-spot!” but didn’t think of it staying inside. The outside bit was a good size and hit the right place, though.

Reviewer 1: Even with a strap-on forcing it deeper, it still kind of missed inside for me. It also just kept falling out — when I tried wearing it for kinky activities when nothing was really holding it in place, if I walked around, or when we moved too enthusiastically with the strap-on.

Reviewer 2: I thought you used it the opposite way, too! I was so confused as to why the buttons would go on the inside.

Reviewer 1: And why the front wasn’t long enough.

Reviewer 2: It wasn’t terrible inside a RodeOH.

Reviewer 1: But the We-Vibe made the cock vibrate, which was cool for my girlfriend.

Reviewer 2: Totally! I liked that a lot.

Reviewer 2: Yeah, I wasn’t even planning on that kind of vibration happening but I liked the effect a lot. It kind of got overwhelming for me, though. I guess I’m sensitive when it comes to pubic bone bruising or whatever, but it seemed to be kind of brutal afterwards when I was the one being fucked with the We-Vibe in as well.

Reviewer 1: I found that too!

Reviewer 1: Not even at all!

Reviewer 2: And I haven’t tried the We-Vibe Tango, but I didn’t like the range of vibration intensities the We-Vibe 4 offered. It started out as way too much and then it wasn’t enough. It was just very middle of the road. I was not impressed.

Reviewer 2: Yep, completely. I had to hold it. I also had a ton of trouble getting the remote to sync.

Reviewer 1: YES. I am very glad that wasn’t just me.

Reviewer 2: I thought I was just dumb.

Reviewer 2: I had to like hold the remote right next to it and hold the power button at the same time and think happy thoughts.

Reviewer 1: And even then I bumped it a few times during sex and had to do the whole thing over again, which was not orgasm-conducive.

Reviewer 2: RIGHT? Super frustrating. Also, the remote did not work through clothing or legs.

Reviewer 1: Or from more than about a foot away.

Reviewer 1: I ended up using the interface on the toy instead, and even that was less than ideal, in the way that having to fiddle with buttons with a thing vibrating against your clit is always less than ideal.

Reviewer 2: Exactly! Talk about a mood killer. I generally find remotes annoying and fussy though. And I always get lube all over them and then can’t operate them anyway.

Reviewer 1: That was a definite problem. I like remotes because I can, as a glasses-wearing person who doesn’t usually wear glasses for sex, usually see them better, but in this case that did not offset the user hostility.

Reviewer 1: Was there anything else you noticed we should talk about?

Reviewer 2: The noise was super loud. We do not live alone, so we can’t use it if our roommates are home. I really like the feel of the silicone, honestly. It has a nice hardy feel, like it’s not going to break in the middle of sex. And the charging dock looks futuristic as hell.

Reviewer 1: I really liked the charging dock! It was probably my favourite part. But we tried the toy in a hotel room and it echoed.

Reviewer 2: Oh fuck, I didn’t even think of that. Will they mess with each other?!

Reviewer 1: I assumed they would not, and according to a sex educator friend and one sex shop I just called, silicone toys are okay to use with other silicone toys. No matter what, water-based lube is essential.

Reviewer 2: I think my final thought is that this toy is great in concept and I’d like to see a We-Vibe 5 that takes these kinds of concerns into mind with its design.

Reviewer 1: I agree. Reading reviews of previous models, it seems like they’ve come a long way, but I’d want to see it be a lot better before trying another one, especially given how expensive it is.

Reviewer 2: Especially when it comes to queer couples. Like it could be a great toy for queers, you know?

Reviewer 1: I know! I mean, queers are all about hacking the sexual experience to improve it and make it even more awesome.

Reviewer 2: I love me some hacking of the sexual experience.