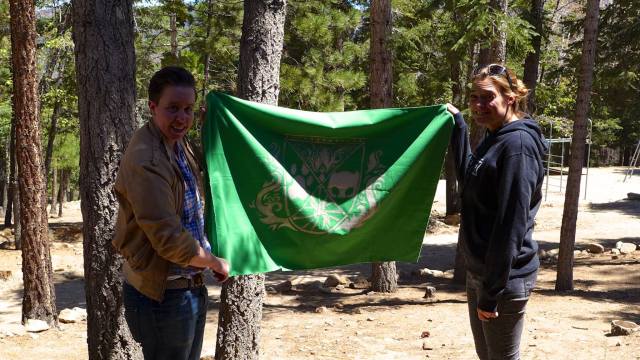 Look Mom we made a whole flag!

Crystal: I’d passed out as soon as we got to the mountain, so when I walked into Wolf lodge the next morning I was greeted by the remainder of what someone explained was boob cake. In any other environment I might have had questions.

Kai Keller, Calendar Girl & Panthers Counselor: Pre-camp is the time when I personally feel like a hamster in a maze bumping into lots of walls and also lots of other hamsters who are bumping into walls. I’m always pleasantly surprised when we find our way out the other side which isn’t until about an hour after the campers arrive.

Robin: We worked on gift bags, Renaissance decorations and workshop/panel prep all day.

Melinda Gonzalez, Thunderbirds Counselor: Oh, cabin decorations. I spent the week prior to camp scouring the San Gabriel Valley and Inland Empire for a model Thunderbird: like, either the car or airplane. I barely succeeded the day before driving up the mountain. I also got the bright idea of buying balloons, despite the fact that Cee and I are both asthmatic and didn’t have the breath to inflate them. But it ended well, because that was how we made friends with Chelsea and Carolyn.

Cee: We made a cabin alliance with Chelsea & Carolyn during cabin prep. We helped each other decorate both cabins and listened to music together. It helped unite our two cabins for the color wars to come.

Mey Rude, Trans Editor & Ghost World Counselor: I think my favorite part of pre-camp is just getting to see all my friends on staff who I otherwise don’t get to see very often. Since I live in the middle of Idaho, most of my interactions with them are online, so I’m always super happy to see them in person. Plus, it’s super fun meeting new people, like Elicia Sanchez and Aja from Fit for a Femme. Elicia is one of the funniest, most fun-to-talk-to people I’ve ever met and Aja is pretty much the embodiment of everything I love about femmes. Y’all really should have seen the look on her face when she heard that we were supposed to wear our staff t-shirts as much as we could, messing up her well thought-out outfit schedule.

Rory Midhani, Illustrator & Gladiators Counselor: I was excited to be meeting all the people from the internet and find that people actually talk the way they email. This was cool.

Cara Giaimo, Contributor & Ghost World Counselor: Being assigned to the Ghost World cabin was a great excuse to tap into the secret part of myself that is a haunted house decorator. Mey, Rachel Rice and I spent many happy hours making several species of ghost (silk-and-cotton-ball, paper-and-sharpie, combinations thereof). But the crowning moment occurred when we first inflated the GIANT INFLATABLE PUMPKIN GHOST TRIO that Mey had borrowed from her neighbor in Idaho. It was the most beautiful giant inflatable pumpkin ghost trio I had ever seen, and it quickly set our cabin apart. 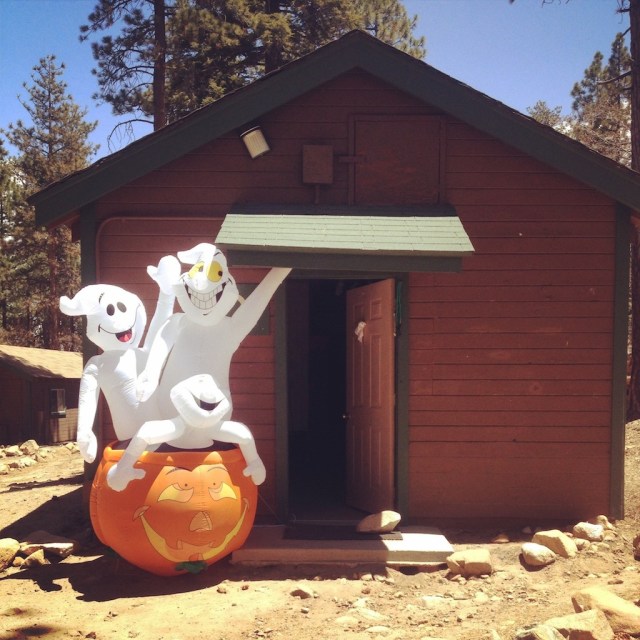 Kaylah: I turn everything into a competition even when no one else cares, so I took cabin decorations very seriously. I remember walking to the Rhythm Nation cabin so stoked to put up my cute little music notes until I looked over and saw Mey inflating those ghosts for the Ghost World cabin. My heart was broken, but it looked perfect. You win, Mey! I give up!

Ali: Decorating the cabin is always a favorite moment. Especially when I get to be co-staff with Whitney Pow. Whitney Pow is a magic human and also she is a genius with the cabin decorations. We were cabin staff for The Foxes (RED TEAM!) and Whitney came up with these amazing origami foxes and we got to customize their faces with sharpie and it was just so fun.

Soph: Rachel and I got super distracted with decorating cat power and consolidating our supplies. I’d never bonded over stickers so much with someone before, especially magical cat ones.

Carmen: Working on setting up my cabin with Rory pushed us into a bromance which would last throughout camp and will hopefully last throughout my life. Seriously, how could I not love him? The kid brought vials of glitter with him to the mountain and was just as driven as I was to create massive, greek columns for our cabin – The Gladiators. 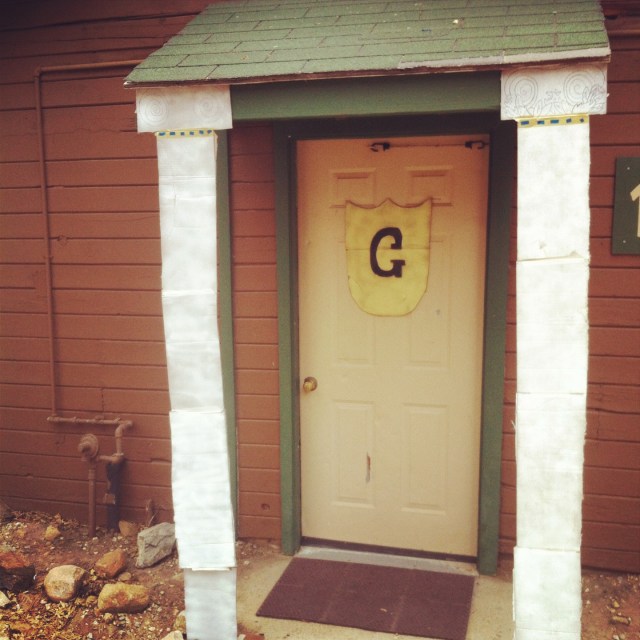 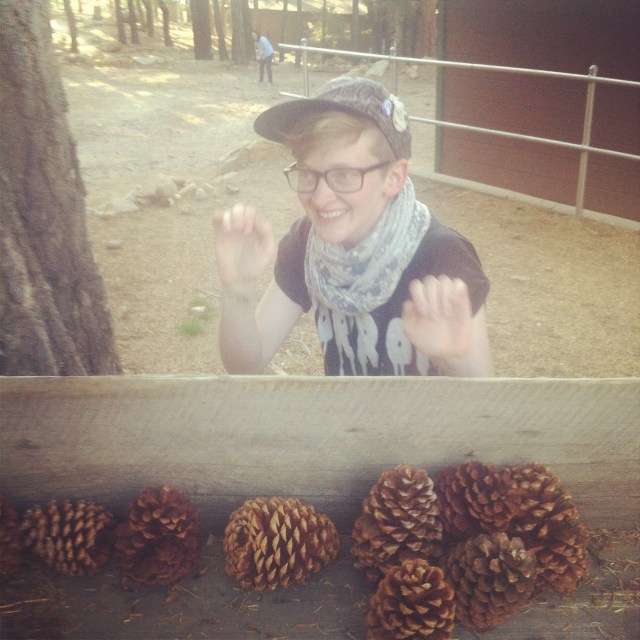 Please sir, may I have some more cuteness? ACTUALLY NOPE MAXED OUT

Rory: Making decorations with Carmen for our Gladiator’s cabin palace was a great warm-up that got me excited about camp starting and getting to welcome our campers.

Stef: Pre-Camp always makes me feel sort of like one of Santa’s elves, or at least how this Jewish kid imagines it would feel to be one of Santa’s elves. I don’t think we ever really feel prepared for camp until it’s actually underway, but we arm ourselves with tons of Sharpies and make a lot of outlines and pack a big pile of gift bags and hope for the best.

Hansen: Crystal and I tried to decorate The Con cabin but I really showed that as the DIY editor, I cannot make poofy hanging balls to save my life. Crystal made fun of me a lot and then we realized that decorating The Con with all black made it look like an Over the Hill party or something really depressing, so in the end it kind of fit the whole theme of The Con album, too!

Crystal: I am not crafty like our DIY editor / my co-counsellor Hansen but I am tall enough to hang stuff from the ceiling, so we work well as a cabin decorating team. 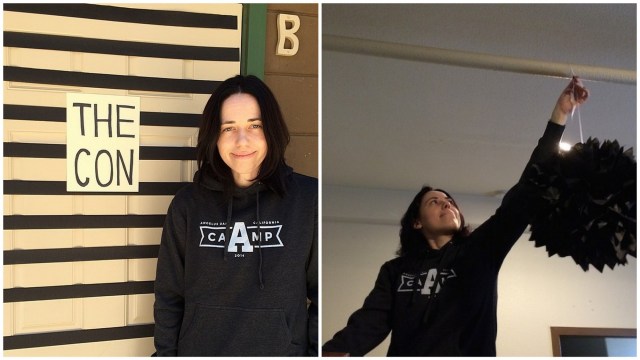 Calm down, I’m calling back to say I’m home now

Meredydd, Outsiders Counselor: Staff bring so many craft supplies that it’s hard to believe they are able to fit any clothes in their luggage. I love seeing the progress throughout the day as the doors of each cabin are decorated. Everyone is so creative and every year the decorations get more complicated. It is really just a matter of time before someone brings a fully developed animatronic display with accompanying laser light show.

Riese: Historically, Laneia and I have spent every free hour of pre-camp in our cabins, ripping pages out of magazines and making mini-collages to plaster on the wall, but this time we did the ‘zine-making and the collaging at home so that we’d have more time at pre-camp to hang out with everyone else — I stuffed gift bags with Chelsea, planned panels with the panelists and (just guessing here, can’t remember exactly) listened to Lizz talk about her vagina. 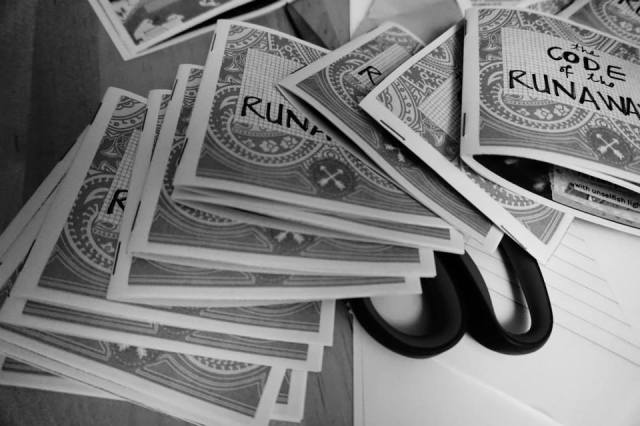 Robin: I had planned to take everyone on a short hike to the famous A-Camp overlook, but those plans were thwarted due to a wildfire up in the woods a few weeks back. Instead, we sat in Deer Lodge and passed around a pinecone and each talked about what we were most excited about.

Chelsea: At some point, Carmen and Riese asked me to go to LAX and help coordinate shuttles. When I agreed, Riese looked at both of us like an exasperated mom and said, “guys, try not to do too many drugs tonight.” Carmen and I would later debate what “too many” was.

Riese: I wanted to empower them to take their fate into their own hands. That’s what we do here, we empower women. 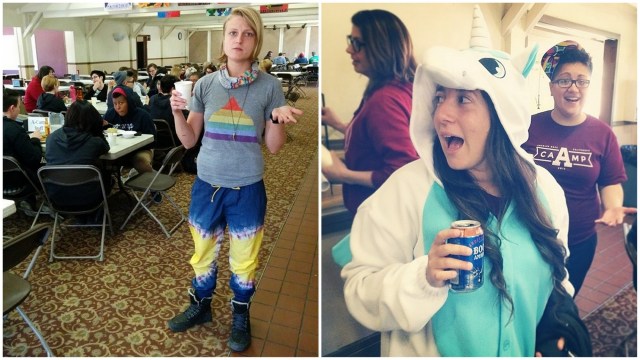 Kai: I spent most of pre-camp getting used to my lungs collapsing from the hìgh altitude and practicing my moves to Bey.

Rory: There was a bear.

Cee: It was neat. 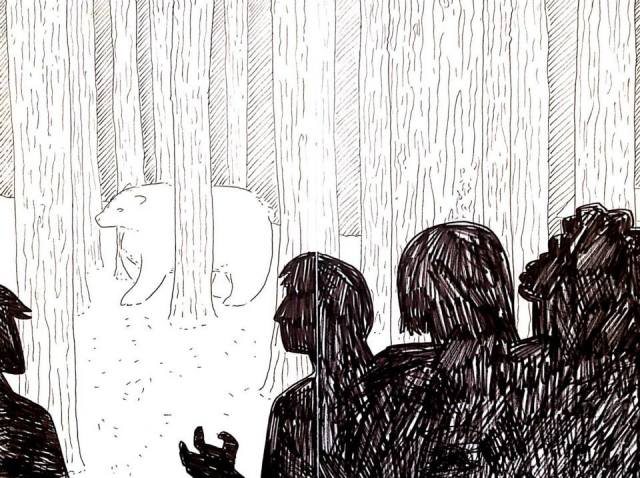 A REAL LIVE BEAR! (By Rory)

Riese: We also had to practice for our opening night skit. I had fantasies of an extravagant dance number with choreography, but as always nobody wanted to indulge me. Ever. In general, “figuring out how to wow them on night one” has been a consistent challenge. BUT BOI DO WE TRY. Seriously next time I want to hire a professional Opening Night Dance Number Leader so that we can all BRING IT. 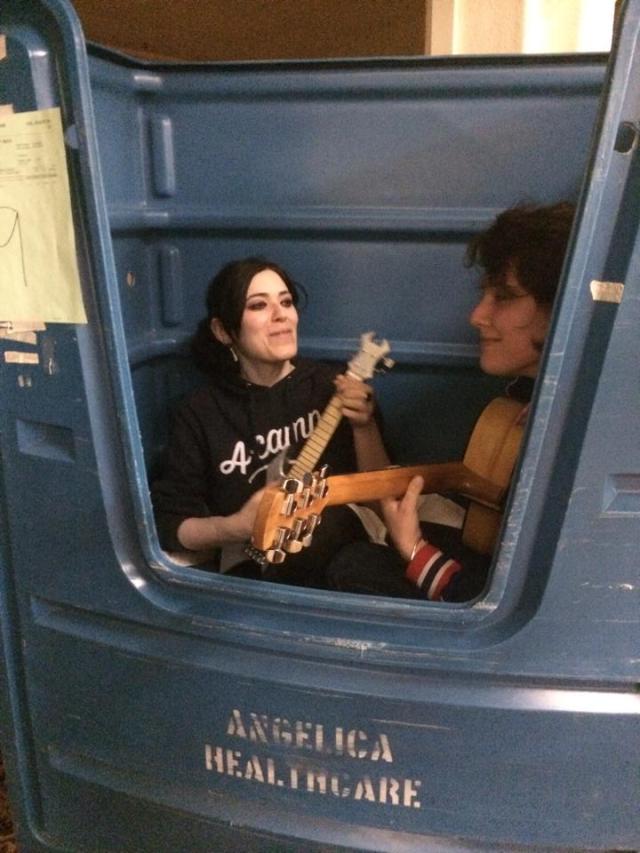 Having an important meeting

auto has written 616 articles for us.