During the final season of The L Word, all the way back in 2009, I spent half my life responding to emails from other lesbian bloggers talking about, “What in the world are we going to write about when this show ends?” I did not know. No one knew. Probably we would be recapping international TV shows from YouTube clips with fan-made subtitles.

We clung to flashes of hope because that’s all we had. The guy who executive produced Sex and the City was creating a new show for broadcast TV called Cashmere Mafia and one of the main ladies was going to be gay! There were no leading queer women on broadcast primetime TV! It was a big deal! But it barely lasted half a season. Same with a handful of other shows you probably don’t even remember. FlashForward, for example. HawthoRNe. Stargate Universe. The 90210 remake was going to feature a bisexual lady-teen! But they only trotted out her queerness for a three-episode arc during a Sweeps Week/The O.C.-style ratings stunt. Same with the bi character on the remake of Melrose Place.

Around that time, I started a spreadsheet to keep tabs on all the queer female characters on TV. It was an easy task because there were only a handful of new ones every year, and they fit neatly into black-and-white categories. They were lesbians or they were bisexual. They had girlfriends (which meant their queerness was visible) or they did not (which meant their queerness was not a factor). They were alive or they’d fallen victim to the second-oldest trope in the Big Book of Lesbian Storytelling. (No. 1: Sleeps with a man. No. 2: Is killed to advance the plot of someone else’s story.) The representation on the show was Good or it was Bad. It was a simple as that: a numbers game and everyone gets a pass/fail grade.

+ Trope-realigning representation. In years past, if a queer female characters was killed, I just wrote it off as more hackneyed, lazy storytelling. And certainly that was true at times in 2014 (Looking at you, Chicago Fire and Arrow), but then there was Lev on Defiance, who died but not really because she was already dead; her ghost existed to color in the lines of Doc Yewll, her widowed wife. Or Stahma Tarr and Kenya Rosewater’s queer relationship on that same show; it existed in clone form after Stahma murdered Kenya in the season one finale. It was weird stuff, sometimes, but it was innovative stuff. Not all the dead lesbians this year are your Tara Maclays, your Dana Fairbankses.

+ The continued on-screen growth of trans women. Glee certainly dropped the ball on Unique (and the rumor is that they’re opting not to finish telling her story in the final season but will tell the story of Coach Bieste coming out as transgender and beginning to transition). And while Orange Is the New Black didn’t give us nearly enough Sophia, her story did continue to grow in the second season, and Laverne Cox became the first openly transgender person to be nominated for an acting Emmy. And, of course, Amazon launched Transparent, which is certainly not without its problems, but is the first show to feature a trans female character in the leading role, and the show employed dozens of trans people as cast and crew. These are all baby steps, but they’ve taken us miles in a matter of minutes.

+ The spectrum of queerness. My original Master List of Queer Female TV Characters had an L/B column for years because queer characters either came out as lesbian or bisexual. But, like I said above, we’re adding a growing number of trans characters to the list. And we’re seeing more and more characters who are exploring their sexuality without labels. Brenna on Chasing Life fell in love with a lesbian character and rebuffed labels for half a season before finally identifying (out loud) as bisexual on the Christmas special. Alison on Pretty Little Liars made out (at the very least) with Emily after telling her she reciprocated her crush back before she was buried alive, and the audience is still split on whether or not she was being sincere or manipulative. Stella on The Fall, who — as Kate said in our roundtable on 2014 queer TV characters — “sees your trope and she walks right on by, honey” made out with Archie Panjabi‘s character with nary an explanation or an apology. A few years ago, queer characters without labels only meant a show/network wasn’t willing to commit to keeping them queer. That’s just not the case any more.

+ Grades beyond As and Fs. For most of my career, there has never been much color in the way we grade shows with queer female characters. If a series had them and allowed them be on-screen (alive), it was basically an A. If a series didn’t have them or made them sleep with men them or murdered them, it was basically an F. But there’s so much more nuance than that right now. Faking It is a great example of this; it was rage-inducing trope city for a hot second, and then it opened itself up and started exploring teenage sexuality for questioning girls in a shockingly authentic way. (On MTV!) Marry Me is a sitcom that hits nearly every tired beat in ’90s-era gender roles comedy, but it features a pair of interracial gay dads and a black lesbian character named Kay who is the funniest person on the show. Jane the Virgin sent its lesbian character, Dr. Luisa, off to an asylum, but only because the show is a riff on wild, implausible telenova melodrama. I have no doubt that she’ll be back. At first glance, so many of this season’s gay lady storylines seemed destined to veer toward offensive and cliched, but they zigged instead of zagged, and it shocked me every single time.

So, below you will find an infographic I spent three thousand hours making. It’s the 2015 State of the Queer Lady Television Union. It’s fun and it’s true, but the best thing is — for the first time in history — the numbers don’t tell the whole story. Queer female characters are becoming more than just vanilla statistics. We still have a long, uphill climb ahead of us as we advocate for more queer women of color, more trans characters, more trope-smashing, and more leading characters who are queer. My six-year-old spreadsheet still matters, but in my lifetime, I am convinced it will become irrelevant. And that makes me really, really happy. 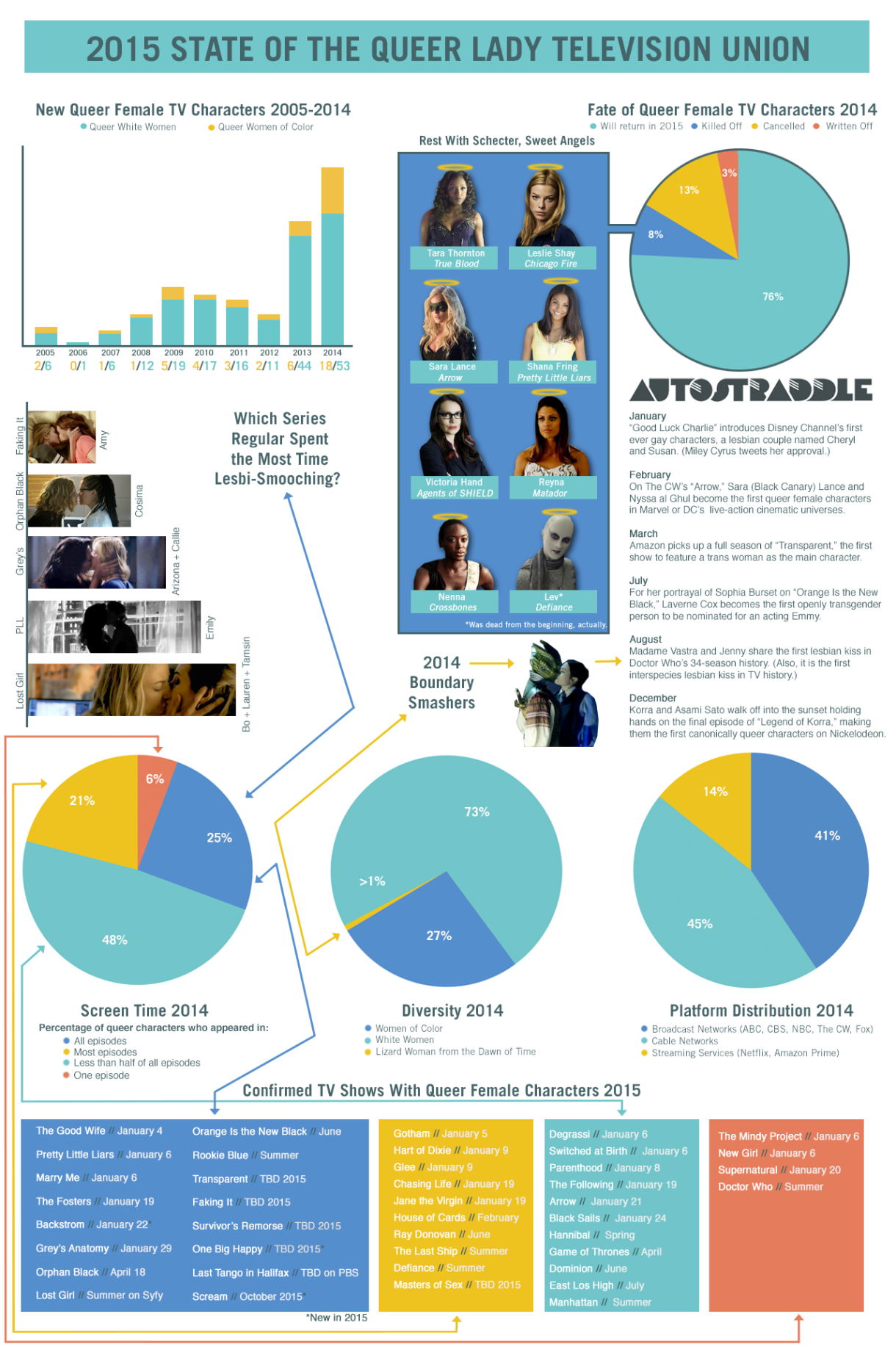