Zero per cent of families with lesbian parents report incidents of physical or sexual abuse, according to the recently released results of the 24-year-long USA National Longitudinal Lesbian Family Study.

The study, which follows planned lesbian families with children conceived by donor insemination in the 1980s, asked 78 adolescents whether they had ever been abused and (if so) the type of abuse, what they identified as their sexual orientation, and about their sexual history. 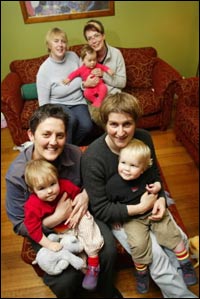 There were no reports of sexual or physical violence by a parent or other caregiver, and only one report of verbal abuse. In contrast, 26 per cent of American adolescents report parent or caregiver physical abuse and 8.3 per cent report sexual abuse. According to the authors of the study,

A key finding in the current study was that none of the NLLFS adolescents reported physical or sexual abuse by a parent or other caregiver. This finding contradicts the notion, offered in opposition to parenting by gay and lesbian people, that same-sex parents are likely to abuse their offspring sexually.

A gay couple in Texas got married over Skype and became the first couple to be married over the Internet. There is, of course, a YouTube video (below).

Mark Reed and Dante Karl flew to Washington, D.C. for a marriage license and then returned to Texas, where they were married by an officiant over Skype. In an interview with the Dallas Voice, Reed said, “The reason we wanted to do it this way is because we wanted to have a wedding here in Dallas with our family and friends. It was very important that all of our family came. It was the first time they actually met, even though we’ve been together 10 years. If we had to go to D.C., there’s no way we could have had the people there who we wanted to be there.” (@dallasvoice)

Remembrance Day (Canada) and Veteran’s Day (US) were yesterday. Did you wear a poppy? You should have. In an article in the Huffington Post, Dan Choi writes,

“Since joining the ranks of gay veterans, I have publicly called this war a battle for equality, integrity, and many other powerful platitudes that resonate well throughout the airspace of a media war-zone. But at the heart of my struggle to end unjust discrimination in the military, these bold moral principles become mere words; the motivation to keep fighting in this war resembles the motivation we realized in Iraq. We did not fight for apple pie, the Constitution, or purple mountains’ majesty. We fought for each other.

As we fight to repeal “Don’t Ask Don’t Tell,” we know that this fight can easily be more painful than physical combat, as the people we fought to protect subject us to the harsh bigotry of popularity polls and the soft bigotry of political inaction. […] The only treatment that can heal the wounds of betrayal and hatred is a recommitment to fight for each other, to stand up for each other, to love one another.”

I MET AUTOSTRADDLERS AND I LIKED IT:

Remember that time Autostraddle told you how to make gay friends and meet girls? It’s still International Meet an Autostraddler Week and you can still meet queer girls and talk about Tegan and Sara and Bruce Springsteen and a poetry reading that’s happening tomorrow and when you started reading Autostraddle and how everything is less awkward and way more awesome than you thought it’d be. Even if you think you’re awkward in public. Especially if you think you’re awkward in public. Everyone you’re meeting? They’re from the Internet too! Seriously, go. Rachel did last night and so did Laneia I think and they both give it two thumbs up.