Now that winter’s over, there are always things happening in Pontevedra. This week we had Bike Week, a Poetry Festival, a book sale for World Book Day and tonight you can learn to play the bagpipes or djembe, take a contemporary dance class or try metal working for free with the city’s open nights. It’s impressive, especially since we’re a town of only 80,000. 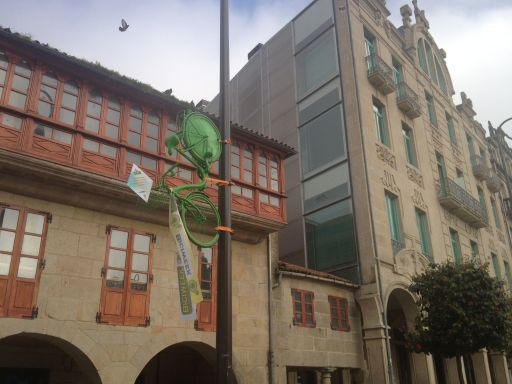 With so many things going on, I’ve had less time to spend running from one grocery store to another trying to find everything I need for a recipe. To keep my pace of life as calm as it’s been all winter – when cooking and eating was all I could do – I’ve been using apps to help me plan my shopping and cooking. Here are some of my favorite:

and online) I use Pepperplate to organize all the recipes that I’ve tried and liked which means it’s full of stuff I’ve found online as well as my mom’s and grandma’s recipes. Along with typing in recipes manually, you’re able to import recipes from certain websites (like The Pioneer Woman, Smitten Kitchen and The Food Network). I especially that you can tag recipes so that they’re easily searchable later and the feature that allows you to scale the recipe for a bigger or small crowd. It also lets you schedule your menu for the week and automatically adds ingredients to the built-in shopping list (something I haven’t used because I like…)

GroceryIQ (free for iOS, Android and online) When I was living with my family, we had two main problems. Problem one was the bread issue. We’d run out of bread, remind each other that we needed bread, and be breadless for three days because all of us forgot to pick it up during the day. Inevitably on the fourth day, we’d all come home with a loaf and have more bread than we could possibly eat. GroceryIQ solved that problem because it lets you sync your grocery list with everyone on your account. It also solves my mother’s infamous brand mania. She loves Prego tomato sauce and Fage yogurt and absolutely cannot abide Ragu or Yoplait. Of course, when she send one of us to the store, we always forget which brand she likes and end up grabbing the wrong one. GroceryIQ has a barcode scanner so that you can get exactly what you want on your favorites list to add it easily when you run out. I also like how it lets you organize your grocery store by aisle so that you can go from the top to the bottom of your list without having to jump around.

Kitchen Math ($0.99 for iOS) What Kitchen Math lacks in design, it makes up for in usefulness. It converts temperatures from Fahrenheit to Celsius, measurements from cups to milliliters and – my personal favorite –  volume to weight thanks to its weight dictionary of hundreds of foods.

Bulk Finder (free for iOS and Android) Bulk Finder is a new app from Bea Johnson of Zero Waste Home. The idea is that groceries that sell food in bulk (think the bulk bins at a candy store, not Costco) are hard to find, an app that maps them out will help visitors and new residents find their way to fresh and environmentally-helpful food. Since it’s so new, it isn’t all that helpful yet, but I’m hoping that the directory of stores will grow as more people find out about it. 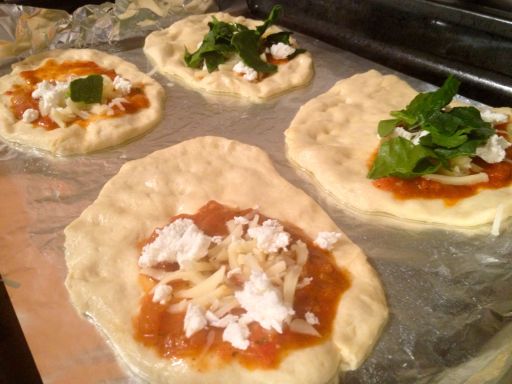 Instructions:
1. Combine the water, sugar, and yeast and let it stand for 10 minutes until the yeast blooms.

2. Next add in the oil and 3 cups of flour. Mix it all up and add up to another cup of flour until you have a nice elastic ball of dough. If it feels like cookie dough, you’ve added wayyyyy too much flour.

3. Place the dough in a greased bowl, cover it with a cloth, and let it stand in a warm place for an hour. After it’s risen, punch it down, flip it over and let it rise again.

+Storage and eating: Uncooked pizza dough can be frozen for 3 months or refrigerated for 5 days, but it’s so easy to make and so hard to resist that I doubt you’ll ever have to worry about that. 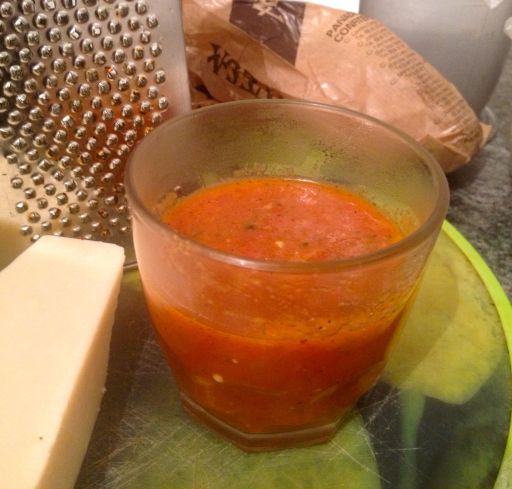 from Me. Which is why this recipe is so un-precise. Just by taste and you’ll be good to go.

Instructions:
1. Fill a large pot half full (not half empty) with water. While you’re waiting for the water to boil, score all the tomatoes. That means take a knife and cut shallow x’s juuuuust through the skin.

2. When the water boils, toss the tomatoes in and wait for the skin to start peeling off. It should take less than 5 minutes.

3. Pour all the tomatoes and the water into a pasta strainer (that’s sitting in the sink, obviously) and then run cold water over them to cool them off. Once you can touch them without burning yourself, peel all the skins off and throw them away or compost them or whatever you do.

4. Chop the tomatoes up and get rid of any tough pithy parts. Pour all the pulp and juice into a pot and put that sucker on the stove. Pour enough water in to cover the bottom half inch of the tomatoes, add a few tablespoons of oil and vinegar and then turn the stove on high.

5. While that’s all heating up, chop the onion and garlic (as well as the basil and parmesan if you don’t happen to have a little container of pesto sitting in your fridge that you need to use up before it goes bad). Add everything – even the spices and salt – to the pot.

6. When it starts to boil, stir it, cover it with a lid and turn the heat down so that it’s just simmering. Let it sit for an hour, stirring occasionally so that it doesn’t stick to the bottom.

+Storage and eating: If you have some pH paper lying around, you could test the acidity level to make sure it’s safe and then can it so that it lasts forever. If not, it’ll stay good in the freezer for 6 months and good in the fridge for a week or two. 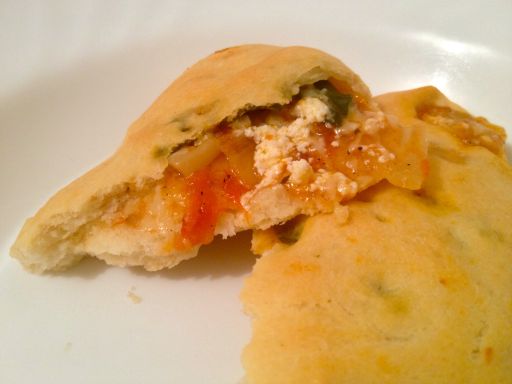 1. Spread the dough into 10 thin ovals. Make them thinner than you normally would because you’re going to bite into twice as much dough as a normal pizza has.

2. Spread the sauce over the entire oval of dough, leaving a half inch or so around the sides.

3. Cover half of the oval with cheese and toppings.

4. Put the toppings to bed. Fold half the oval over and pinch around the sides. Take a fork and punch a few holes in the top so that it doesn’t explode in the oven.

+Storage and eating: Wait until the pizzas are completely cool before you do anything with them or they’ll get soggy. I store them in the fridge inside a sealed container and wrapped in a dishtowel to absorb moisture. They can be eaten cold, heated up or dipped in sauce or herb-y olive oil (my pick) that you bring along with you.