Ed.Note July 2012: This post was composed in February of 2010 in response to The Grammys during a time when I was a serious Lady Gaga fanatic. I remain a Gaga fan but am honestly kinda embarrassed by the unbridled Gaga fanaticism expressed in this post. In lieu of retro-editing the post, I encourage you to see the few statements about Gaga contained herein in the context of that time and not let those statements distract you from the rest of the post. Obviously Taylor Swift herself has changed since then and will continue to, so just you know, appreciate this for the little time capsule it is. 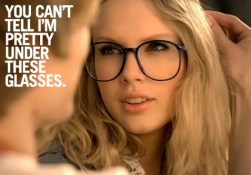 Yesterday, looking for Daily Fix links, I came upon an MTV news piece by James Montgomery titled “Why You Shouldn’t Hate On Taylor Swift.” Fair enough — the hype cycle moves quickly these days and now is probably the opportune moment for someone to step up and captain the “backlash-to-the-backlash” train. But his argument is so off point I wondered if he’d picked this topic or if the unprovable thesis had been assigned to him. Because it’s a difficult point to prove.

For starters, no one has been “hating on Taylor” — as I understand it, they’ve been hating on Taylor Swift the Product and, as of late, her accumulation of Important Awards. See, there’s nothing to hate about Taylor Swift the human. She’s nice and honest, she’s pumped much-needed cash into the music industry, she looks cute in glasses and she’s friends with Our Heroine Ellen DeGeneres.

There wasn’t even anything to “hate” about Taylor Swift’s twangy addictive pop/country music until she snagged Album of the Year, thus transitioning her from “harmlessly popular teenage pop fad” into the (relatively) Legendary-for-artistic-merit context associated with prior winners like John Lennon, Bob Dylan, Lauryn Hill, U2, Outkast and Eric Clapton.

Furthermore, relative to the oft-criticized oversexed young ladies of pop music, the Great Proverbial Mothers of America agree that they’d like their babies to grow up to be cowgirls, as long as that cowgirl is as effortlessly adorable and endearingly successful as Taylor Swift. And well; from a distance, that idea seemed fine to me too. If you’re one of those mothers who insist on conservative role models who compose girl-bashing boy-crazy rain-soaked anthems and you value a starlette’s “purity” over intelligence or even raw singing talent, then fine; better Taylor than Bristol Palin or G-d forbid, her mother. More on that in a minute.

The article claims this “hating” on Taylor is another nasty result of the internet’s “secure blanket of anonymity” — that people hate on Taylor because they can. That’s silly, ’cause the “hating” he describes comes from identified Facebook users and identified journalists. So, moving on.

His other primary theory for why everyone “suddenly” is “hating” on Taylor is that post-#kanyeshrug, Taylor earned “bona fide mainstream celebrity” status which made her vulnerable to corresponding widespread attack and criticism. That’s untrue as well: most of these so-called “haters” either never liked Taylor or didn’t know of her ’til she won the award that their favorite musician lost. They’re not “hating” on Taylor simply because generalized “celebrity-hating” is a sport.

Where do my negative feelings towards her fit in? I didn’t know much about her ’til the VMAs, when right after learning who That Girl was, she beat Kelly Clarkson, Beyoncé and Lady Gaga for “video of the year” and I yelled [a bit drunk, I admit] “WHAT THE FUCK? GAGA? BEYONCE? ANYONE?” at the teevee, and, as if on cue, Hennessey-shitfaced Kanye popped up on stage to speak my mind and consequently kill his reputation.

Unsurprisingly 75% of the commenters on the MTV piece disagree with Montgomery’s case on all counts, particularly his dismissive “So what if Taylor had an off performance?,” since Taylor always has an off performance. In fact, MTV found the dueling commentary on the article so interesting that they made an article out of the comments before I even finished writing this one.

Yes, this gigantic essay began as a comment for that MTV article. I had feelings. They were getting too long for a blog comment. I decided to take said feelings to a Daily Fix. Then I hesitated.

See, I don’t like dwelling in negativity, nor do I enjoy vilifying anyone besides politicians & Ilene Chaiken. In fact, I prefer writing to endorse redemption of popular villains, such as Tila Tequila and Jenny Schecter.

“…Her entitlement to a blatantly untrue ‘fairy tale’ narrative tastes disingenuous and cheap.”

But I can’t seem to let go of this Taylor Swift thing, and though the comparison is extreme, she irritates me much like John McCain irritated me for most of 2008… or, more accurately, how Avril Lavigne‘s faux-“punk” abstinence anthem “Don’t Tell Me” irritates me or yes, how the Twilight franchise occasionally irritates me (though I’ve seen the first movie now, and I admit it does look cool).

I’ve already shared some of my qualms with you: that I feel her win represents a sinister endorsement of mediocrity/Wonderbread, that it means Digestible beat Daring and I prefer daring, that I’m irked by her consistent inability to recognize more deserving nominees in her acceptance speeches, and that her entitlement to a blatantly untrue ‘fairy tale’ narrative tastes disingenuous and cheap.

However, before I brought it up again (especially this late, as the backlash-to-the-backlash part is over and we’re now in the Valley of WhoCares, which is clearly where I “thrive”), I knew I had to do my Taylor Swift due diligence. After reading that MTV article I did it: I listened to her music, read her blog, and watched her videos.

And I finally figured it out.

Taylor Swift is a feminist’s nightmare. 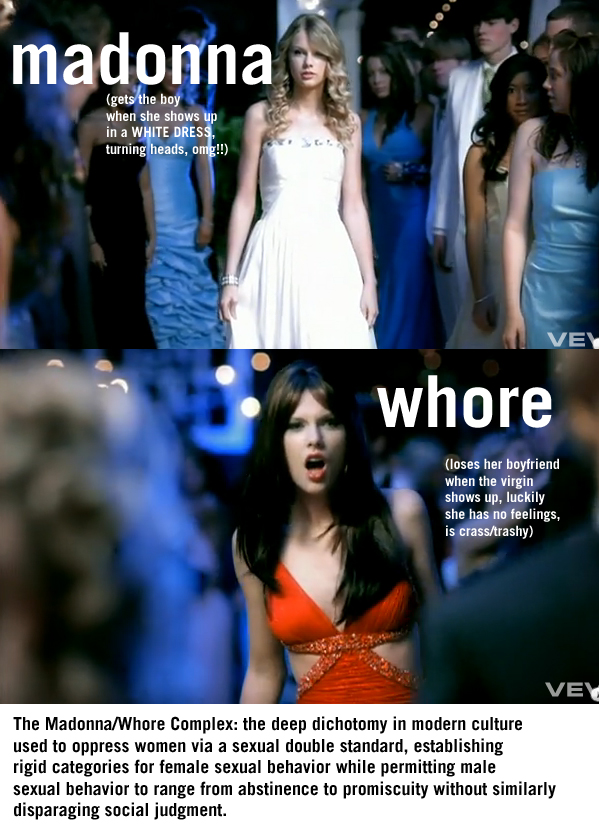 The rush to exalt Swift is (I believe) a desperate attempt to infuse our allegedly apocalypse-bound country with a palatable conservative ideology in the form of a complacent, repressed feminine ideal. It’s working ’cause Swift writes good songs and America is terrified that its children have been scarred by Britney Spears’s psychotic vagina and Miley Cyrus’s obnoxious adolescence.

“The Grammy voters chose someone who, according to her lyrics, has spent her entire life waiting for phone calls and dreaming about horses and sunsets.”

Rather than choosing an established/evolved talent (Beyoncé) or a fresh potential revolutionary (Lady Gaga), the Grammys chose someone who, according to her lyrics, has spent her entire life waiting for phone calls and dreaming about horses and sunsets.

Though the debate over her performance skills is a well-beaten horse at this point, her unequivocal worthiness as a role model for girls has been accepted complacently; at least within my limited purview.

Listen up; if I ever get my life together enough to reproduce other life forms, they will not be joining Taylor Nation — they will be brave, creative, inventive, envelope-pushing little monsters who will find a pretty, skinny white blonde girl in a white peasant shirt strolling through nature-themed screensaver-esque fantasylands singing about how “when you’re fifteen and somebody tells you they love you, you’re gonna believe them” not only sappy, but also insulting to their inevitable brilliance.

I don’t want my unborn grandchildren to listen to the story of how Taylor Swift won a Grammy she hadn’t earned. I want them to set pianos on fire.
+

First, let’s address the age issue; as Swift is often celebrated as some kind of child prodigy. Twenty isn’t young and her talent, while exceptional, is not unheard of. Grammys have gone to Adele (21), Christina Aguilera (20 in ’00), LeAnn Rimes (16 in ’97), Mariah Carey (21 in ’90) and Alicia Keys (20 in ’02), among others. Until there’s evidence Swift can sing live, she’s not uniquely qualified as a musician.

Why does Swift seem, at 20, a decade younger than Lady Gaga? ‘Cause Swift’s package is “Purity Sue Ingenue”:  eternally childlike, obedient and one-dimensional. Mothers love this package, and teenage girls are hypnotized by her simple songs and pretty hair and propensity for crying on her instruments.

Listen up! When Beyoncè was Swift’s age, she was onstage with Destiny’s Child, proclaiming: “The house I live in / I’ve bought it / The car I’m driving / I’ve bought it / All the women who are independent / Throw your hands up at me!”

It goes without saying — because, of course, no one wants to say it — that Swift was able to succeed so early ’cause her family was both supportive & wealthy enough to enable her ambitions. Swift had dreams, she chased ’em, and she got ’em; all before puberty! That’s not a Cinderella story, that’s more or less the most awesome childhood of all time.

“Why does Swift seem, at 20, a decade younger than 23-year-old Lady Gaga? ‘Cause Taylor is the ingenue: eternally childlike, obedient and one-dimensional.”

So let’s stop judging her work on children’s terms and excusing that giggly self-absorption as a folly of youth. It’s annoying.

Never was this bunnyrabbitchild persona more exploited than it was after the VMAs. If Kanye had snatched that mike from Lady Gaga, she would’ve snatched it right back, called Kanye an asshole (he is), admitted he was right (he was), and the whole thing would’ve been done and DONE. She certainly wouldn’t have needed — or wanted — the entire country’s fawning faux-sympathy for months afterward.

Taylor had another chance at the VMA’s end to prove her maturity by thanking and honoring Beyoncé for calling her back up to speak. But no, she was just like, “A’ight my turn!”

Role models aren’t suspended children, trapped by projections and unable to grow until affirmed by an idealized male partner. Role models grow and change and challenge themselves and are rewarded for exceptionalism, not potential. Independently.
+

If Swift’s work connects with teenage girls, it does so on the most simplistic, reductive territory of all: pining for boys, walking in the rain, kissing in the rain, crying drops of tears on her guitar, driving in trucks with cool boys, wanting boys she can’t have, more rain, more letter-writing, more stalking, more broken hearts, breathing problems as a side-effect of broken hearts, fairytale princess this, white horse that, more pining at the window, more psuedo-stalking, more incomplete hearts yearning for your touch, and one song that misinterprets Shakespeare and The Scarlet Letter so criminally I’m certain she’s never read either.

Swift simply hasn’t had the life experience and doesn’t inherently possess the emotional maturity to create great art. Which is fine — most young pop stars don’t, which is why they don’t win Grammys.

We’ve decided to break this down for you with a special Autostraddle infographic: 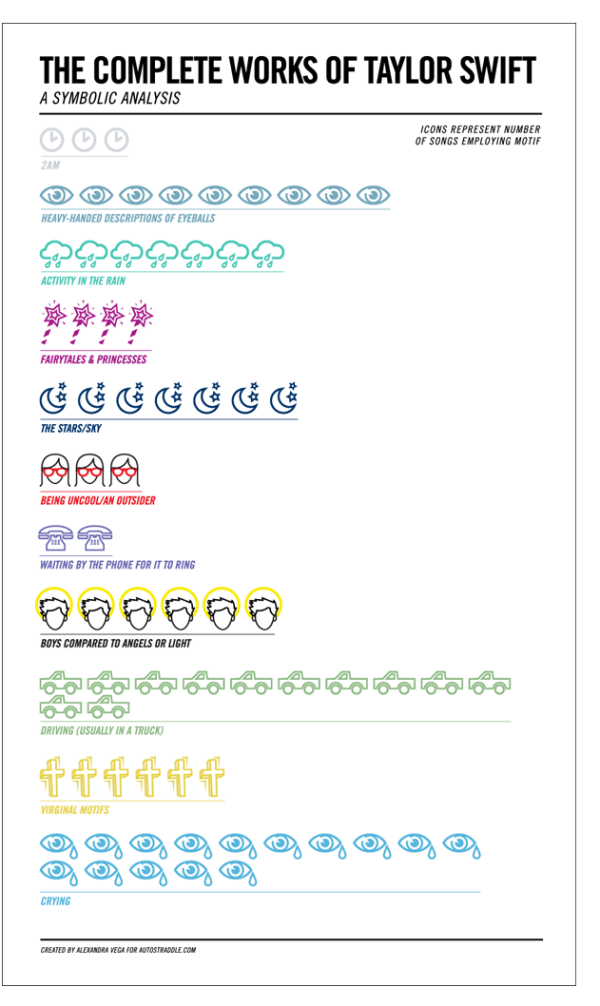 Next Page:
Not only are her songwriting choices almost mind-numbingly safe, but she also covers territory so familiar, it’s almost a carbon-copy of someone else’s song!

Riese has written 2824 articles for us.