LINDSAY: The cute videos of Niecy Nash appearing like a fairy godmother to be Lindsay Lohan’s life coach or something are back! We look at how many racks of clothes Lindsay has (many) and how many boxes of shoes (also many, but they are labeled very well.) The tone of the series seems to be implying that this apartment cleanup is really some kind of life intervention for Lindsay – done “with the hope that it carries over into other aspects of her life that are equally chaotic and messy,” and that the reason her apartment is so messy is that she is busy being crazy. I don’t know, I feel like being very thin and having people take photos of you in public is very time-consuming, she is very busy and the fact that she took the time to label her shoes so well is impressive! Or maybe this commenter said it best:

Basically maybe we should just decide the kid is alright, and it’s great that she can be BFFs with Niecy Nash now, this is a happy thing you guys! Go watch the videos at the Insider they’re cute. (@jezebel)

JSTEW: Did you know about this series of interviews/arguments/FACEOFFS being hosted between Jon Stewart and Bill O’Reilly? I didn’t, which is maybe not surprising because the edited segments that are being shown on FOX are not that interesting. Apparently, though, the actual uncut interviews are BALLER, by which we mean that Jon Stewart delivers an unholy smackdown and pretty much proves that FOX has become an insane cracked-out fearmongering propaganda Obama-will-eat-my-babies-with-his-sharklike-rows-of-multiple-teeth machine. Gawker has many, many examples of this happening in convenient video clip form. Here’s what Stewart really said about Neil Cavuto’s practice of raising “Is Obama a Stalinist?”-style questions: “I know what this is. I come from Jersey—it’s the same thing: “I’m not saying your mother’s a whore. I’m just saying she has sex for money.” I can’t embed the video which is frustrating because it’s so good so go watch it! (@gawker)

SNL: Saturday Night Live goes homosexual for a night for real: skits on DADT, and other things, and it was really funny. We watched it and laughed and now we are tired. Here’s the videos from the show on Gawker, and we’ll try and find them for you tomorrow for here, the whole thang. 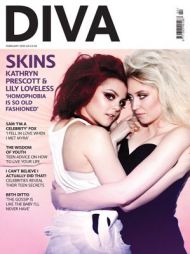 DIVA: DIVA magazine, that hawt lesbo mag from the UK, was founded in 1994. Every year there are more and more lesbians and people like the magazine more and more: “Britain’s 1.8 million lesbian and bisexual women are picking from a field of one when they buy Diva, which may have helped the magazine maintain its 55,000 circulation during the downturn. “We are stable on sales and on advertising income. Growth has happened exponentially,” says Czyzselska. “Because there is no competition, we are aiming at every lesbian – and you can’t meet the needs of every lesbian all of the time,” she says. Diva is bought by those in their mid-teens to their 60s, with the average reader being 33. “We try to reflect issues which our readers feel affect their lives.” (@the independent)

ADVOCATE: Meanwhile, The Advocate says Air America owes Rachel Maddow $4 million — but how much does Advocate/Regent/Here owe its people? (@queerty)

HOTTEST PEOPLE IN MUSIC: Here’s your chance to tell everyone that Lady Gaga and Adam Lambert are the sexiest people in music. (@billboard)

HATHAWAY: Pretty Girl Anne Hathaway tells GQ about how she blew the self-righteous taco stand that is the Catholic Church (along with her entire family) because after her brother came out she couldn’t help but ask herself “”Why should I support an organization that has a limited view of my beloved brother?” Atta girl, Anne! Also your hair is cute! (@shewired)

SWEET: The company responsible for the fun in the sun that was the 2009 Sweet Caribbean Cruise are starting a new project with Live Sweet Voluntour. “The Live Sweet Voluntour 2010 aims to start as many ripples in as many cities in the United States as we can reach this year,” Wentworth said. “We’re traveling to different cities to lead community service projects, gather Sweeties for fun and fundraising fitness events and host parties to celebrate our lives. We’re also spreading lesbian visibility in the United States, where it seems like every day people are voting on whether we deserve equal rights. The more we connect with people in our own backyard, the less likely they will be to vote against us.” What are you waiting for? Check that shit out! (@passportmagazine)

OBAMA/UGANDA: The National Prayer Breakfast happened this week, and while that sounds like something you would never be interested in ever, it matters because many members of the creepy quasi-secret-religous-cabal The Family were present, and President Obama used it as an opportunity to say hell to the no on the Ugandan “Kill Gays” law.

“We can take different approaches to ending inequality, but surely we can agree on the need to lift our children out of ignorance; to lift our neighbors from poverty. We may disagree about gay marriage, but surely we can agree that it is unconscionable to target gays and lesbians for who they are — whether it’s here in the United States or, as Hillary mentioned, more extremely in odious laws that are being proposed most recently in Uganda.”

Did he finally do something right? Or just something… not wrong? You decide! (@feministing)

RU PAUL: One of our favorite bloggers, Rich at Fourfour, has interviewed one of our Favorite People Ever, Ru Paul. As you might expect, the entire thing was super classy and smart, with discussion of camp, society’s fear of feminine men, the anthropology of Drag Race, and “the unlikeliness of constructing reality around parody.” Watch the rest of the videos over on VH1! (@blogvh1)

SUPERBOWL: Are you all nervous and sweaty because you’re worried that your ovaries will completely debilitate you from participating in the Important Cultural Event happening tonight? No? We didn’t think so. Jezebel writes a helpful guide to why we don’t need helpful “Girls’ Guides to the Superbowl.” (@jezebel)