And so the backlash begins! Mr. Adam Lambert got the controversy he may have possibly sought when ABC announced the cancellation of his performance on Wednesday morning’s “Good Morning America”:

An ABC spokesperson tells The New York Times that “Given his controversial American Music Awards performance, we were concerned about airing a similar concert so early in the morning.” 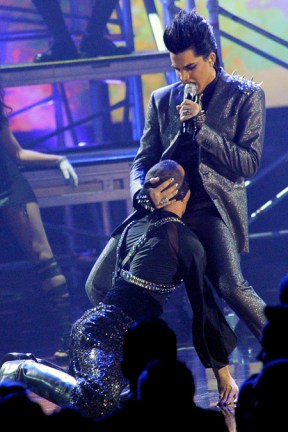 A similar concert? Imagine if Adam Lambert was planning to re-create his scandalous American Music Awards performance at 8 am, giving Diane Sawyer and The American People a side of beejer with their morning coffee? You think Folger’s picks you up? Well how about MALE ON MALE ORAL SEX SIMULATION! OH NO!

Sidenote: By far our favorite part about Adam Lambert’s risque performance Sunday night was that someone in a control room at ABC was clearly freaking the fuck out when the male-on-male face-to-crotch moment went down (get it? WENT DOWN?) and responded by randomly MUTING AND awkwardly cutting away from the tight shot (get it?!) at the same time. Like as if this person saw the horror and threw themselves upon the controls in desperation. The visualization of what I think this moment looked like in the control room makes me LOL and I could do a good impression of it in person but we are a legit media outlet with no video budget SO WE ARE WRITING WORDS INSTEAD.

Really though, this cancellation comes about because ABC racked up over a thousand complaints from Lambert’s Sunday night’s performance at the AMAs and they can’t be upsetting their morning advertisers. Not to mention all the boys mislead to believe it only takes half a second to get their boyfriend off. You know how it goes…

So the fine community of Twitter responded with #ShameOnYouABC which shot straight to the top of the trending topic list.

Also, Mediaite has a great video of Adam Lambert talking to Access America after the world lost it’s homophobic innocence, where  he speaks about the possible censoring and editing of his song/performance as discrimination.

Here are some of the transcribed highlights and quotes of this quick encounter with this weirdo lady from Access America:

“You know not everybody all around the country can take that!”

Adam Lambert: (Looking rather perplexed) “Well, I was hoping they couldn’t.”

He responds to the hosts claim that he will be edited:

“If it’s edited, that’s discrimination. I will be a little disappointed because there is discrimination going on in this country, there’s a big double standard. Female pop artists have been doing things provocative like that for years and the fact that I’m a male and will be edited and discriminated against could be a problem, a BIG problem.”

“Shock Rock is something that existed, for example in the 70s, Alice Cooper, David Bowie… you had artists who pushed the envelope and that’s what made them fresh. I think that surprise is part of entertainment.”

Um we couldn’t agree more — though we’d specify a “gay man,” as usually straight men are encouraged and celebrated for engaging in all kinds of sexual escapades/gyrating with other women on stage or in their videos. Let us not forget the Britney/Madonna/Aguilera smooch that the cameras (or various men in the control room) couldn’t get enough of back in 2003. It may or may not have been my screenscaver for a few months years. Also remember when Ozzy Ozbourne bit a bat’s head off? That was awesome.

In the end, it looks like CBS wins cause Adam Lambert has since been booked for The Early Show tomorrow (Wednesday) morning and David Letterman tomorrow night.

Of this scheduled performance on Letterman, Lambert says: “You’re gonna see a song that’s a different side of me as an artist. It’s more about vulnerability and love, and the search for love. Not shenanigans in the club.” After all, Letterman’s probs had his fill of sexual shenanigans on his show this year and will probs be okay with someone else’s escapades on center stage.

Oh Adam. I’ll shenanigan my way into your club any time!