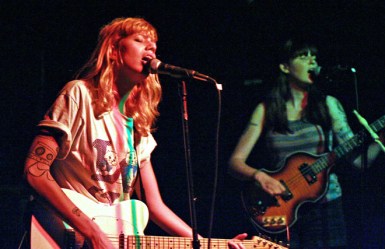 It can be irritating and off-putting when bands become so over-hyped and over-exposed in a really short space of time. I guess it’s a natural consequence of the global internet age, where word (and hyperbole) spreads faster-than-whatever-spreads-faster-than-wildfire. For lots of new bands the cycle of hype followed quickly by backlash is becoming a familiar pattern. Vivian Girls are a prime example of this. I have to admit that my wariness towards music that’s stratospherically hyped meant I was prejudiced against them from the start; in fact I think I pretty much avoided listening to them and giving them a go for at least a year. However, when their latest album Everything Goes Wrong came out this year, I decided on a whim to check it out. Something about the combination of gauzy, distorted noise-pop coupled with Cassie Ramone’s brash vocals just sounded so good to my ears, I was hooked. Walking to the gig, the friend I’d dragged along for the ride quizzed me on how I’d sum up the band’s sound, incapable of limiting myself to just one adjective or influence I responded that they were a melting pot of “Part punk, part noise music with a splash of 60’s girl group thrown in for good measure!”

The subject matter of Vivian Girls’ songs isn’t of a political nature, but I still see them as indebted to and carrying on the spirit of Riot Grrrl in many ways.

It was getting late and the room was starting to fill up with people jostling excitedly for a good spot to watch the band. Finally, Vivian Girls, consisting of Ali Koehler on drums, Cassie Ramone on guitar and lead vocals and Kickball Katy on bass, ambled on to the tiny stage and launched straight into ‘Walking Alone at Night’ off their latest record. It was an energetic, rapid-fire set. There was barely room to breathe between songs, sung in quick succession almost before the final hum of the previous one had ended. Their sound translated even better live, and it made for a super fun, danceable gig with great atmosphere. The set was interrupted when Cassie’s punishing guitar playing led to two snapped D strings. Katy and Ali took over the entertainment duties as replacements were sort and Katy joked with mischievous innocence “at least it wasn’t a G string. Am I the only one who still finds that funny?” making the audience chuckle politely. We were then further regaled with amusing details of their first Australian adventures, of being beach bums and encounters with a “stoned Koala bear”.

The subject matter of Vivian Girls’ songs isn’t of a political nature, but I still see them as indebted to and carrying on the spirit of Riot Grrrl in many ways. Considering what emerged as one of the tenements of that movement, the simple idea that ‘girls need guitars’ in a music scene dominated by men and devoted to the expression of masculine experience, it’s kind of infuriating to read the amount of sexist criticism directed at the band from various sources. They’ve been often accused of not being able to ‘play’ their instruments, and while they’re not exactly Kaki King (not many people are), they’ve crafted a sound that works for them and is more than efficient in expressing thoughts and emotions, and evoking them in others. Which in my opinion is what music, particularly the punk genre, is all about. It’s interesting that someone like Sid Vicious is lauded for his punk attitude and famous for being a three-chord guitarist, but when it comes to an all-girl band people suddenly become fussy connoisseurs of musical virtuosity. In any case, it’s still completely awesome and inspirational to see three girls rocking out and kicking ass on stage. Plus, they also have a brilliant, motley collection of tattoos amongst them. And, I mean, anyone who can make a tattoo of a hamburger on her bicep look enviable has my vote.

Vivian Girls are gloriously shambolic to listen to and experience live. Ali Koehler bashes the skins up back and Kickball Katy bops along angelically on her bass guitar as Cassie Ramone, an introverted yet compelling performer, thrashes around wildly and delivers her raw vocals. It’s simple, impossibly catchy punk music. When the band returned for an unexpected encore and announced “we’re going to play some songs off our old record!” someone muttered “yeah, from all the way back in 2008!” and everyone laughed. I guess a lot has happened in a year for the Vivian Girls. They can count at least one new fangirl in me that’s for sure.