Recently, in Kalamazoo Michigan, Katrina and Marashette Burks, a married, Black lesbian couple, had their home broken into, valuables stolen, and slurs spray painted on the walls, including the words “Move Or Die”. Because of a lack of hate crime legislation that includes sexual orientation, the crime is not going to be charged as a hate crime, despite the fact that there are other factors, like their race and their gender, that could have left them to be targets. The need for hate crime legislation for the state that covers gender identity/expression and sexuality is, of course, paramount, but it strikes me as odd that in a case in which more factors than just sexuality or gender expression were present, that only that was touched upon, both in the coverage by major news sources and what the “hate” would be constituted as.

This all reminds me of when two years ago, the story of Black homophobic protestors at Gay Day, a queer family event at the park down the street from my home in Grand Rapids, Michigan, went viral. The internet and members of my community blew it up — these angry religiously zealous Black men, or “thugs” as they’d so cleverly code it! Those people, they’re just so Christian and homophobic, just like Dan Savage said! Never mind that two of the most vocal women yelling at them were my friend and I, both Black, mixed queer women (you can see us in the picture on the other side of the fence, I’m the one with glasses and big hair standing next to the girl with a pink shirt on). It was all more complicated than just homophobia, and it then went to include racism and misogyny. I argued tirelessly with a bunch of white queers about it on the event page — while the men were definitely gross, disgusting, and potentially triggering and violent in their threats and their bigotry, that didn’t mean it was OK to throw racialized statements at them. I, as a woman and queer, naturally felt some kind of way about the protestor’s ignorant bullshit, but as Black, I felt some kind of way about the Gay Day attendees’ ignorant bullshit, too.

This racial and gendered climate is why I stopped going to the popular local gay bar, Rumors. As it was, I already experienced multiple microaggressive and straight up racist incidents in the largely segregated club. But then when an incident between a white male bartender and a patron, a butch Black queer woman, culminated in violence, with two bouncers using excessive force to hold this woman down while the bartender went to angrily kick at and hit the woman, I knew I had to stop going, possibly for my safety. “This isn’t right, she’s already down on the ground and that is way too much force!” I complained to the woman working the door, also white, after pulling at one of the bouncers to stop. “It’s none of your business,” she told me curtly “She was stealing from the bartender!” I had a feeling this accusation most likely wasn’t true, and even if it was, the force was unnecessary.

This, mind, all happened the week after my fellow Black queer friend Dea, then 19, was sexually harassed to the point of tears by one of the bouncers. When she reacted and told the dude to fuck off, they went to throw HER out. It wasn’t until I stepped in and argued with the other bouncer that she got to stay. Most of my friends haven’t bothered to go back, which, to add more injury to insult, limits you as far as getting involved in the gay scene here.

As Black women, we have unique challenges when it comes our sexualities and genders because of our race.

Hate crimes against Black queer women largely get erased — the focus is on straight Black males experiencing harassment by law enforcement and white males experiencing homophobia; the latest rise in visibility of street harassment and misogynist school dress code policies is largely focused on white women. Coupled with the new “You might be gay, but I’m Black and I can’t hide that!” that many straight Black folk, women included, are espousing, all of this leave us trans women and queer women of color in the dust, though at this point we all know that anti-gay hate crimes are mostly likely to happen to queers and trans folk of color. 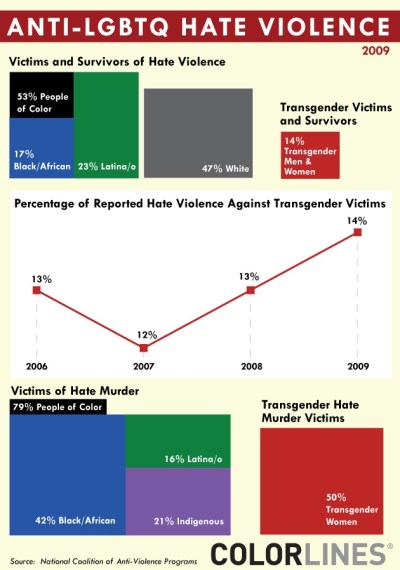 It all becomes even more complicated in ultra-white, bootstrappy Dutch West Michigan. Even in the rather progressive yuppie enclave that is Grand Rapids, there’s a quiet, passive, white-washed, post-racial attitude about gay identity and rights. White gay folk who are honestly otherwise assimilated and incorporated into the culture as far as their race goes often then help create whitewashed, binarist cis spaces for themselves. It was a white butch woman who first ever told me “There’s a nigger in every race.” Hell, the last few times I’ve heard the word be uttered in person it was by a white queer. Queer events are filled with Lady Gaga and mass corporate branding with no space for queers of color or our special and unique cultural expression and history. Once, a white gay guy said about rather popular gay Black ball events a friend of mine hosts, “It just isn’t, you know, really isn’t that fun, no one goes.” After first going to a party myself and seeing how full it got, I understood what he meant by “nobody” going.

Between erasure, hostility, white cis gay ideals, fetishism, and tokenism, it makes it hard for us to come forward and feel our lives and issues are being represented, addressed and respected. What’s more, all of it is so… polite! All this volleying between “Race doesn’t matter, and Black people are homophobic, and oh man, Gay is The New Black!” makes it sound like, you know, people like me don’t exist.

In the wake of a hate crime committed against this married Black lesbian couple in Kalamazoo, a town not far from where I myself live, we can no longer afford to simplify and erase these stories and all the perspectives and angles that play into it. I can only imagine the stories of intimidation and erasure other West Michigan Black queers who are not men experience and feel. It would be kind of cool if my community, and others, gave a little bit of a shit about it.

Briana has written 1 article for us.