Michigan isn’t necessarily the first place you think of when you make a mental list of anti-gay states. There are other states whose elected representatives, like Rick Santorum when he was senator of Pennsylvania, are notoriously homophobic; or states where amendments meant to ban already-illegal same-sex marriage are passed. But if you look at it closely, Michigan has its own problems. There was the law that actively revoked benefits for domestic partners of employees of public agencies, the outrageously and vocally homophobic mayor of the town of Troy, the bill allowing counseling students to refuse treatment to gay patients, and the fact that you can still be legally fired in Michigan for being gay.

LGBT leaders in Michigan have begun a hunger strike initiative meant to raise awareness about the environment that LGBT Michiganders face.

“We’re trying to educate our straight allies about the extreme anti-equality environment in this state,” said David Garcia, executive director of Affirmations in Ferndale, which will host the hunger strike. “One could argue that Michigan is the Mississippi of the civil rights movement when it comes to gay equality. We are constantly behind on many issues, and many people don’t know it.” 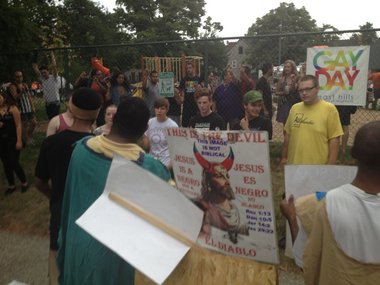 For a full 99 days, community members will take turns fasting for 24 hours while sitting in a large window, where they’ll be visible to passerby. The fact that the campaign is a group effort participated in by eight different queer centers from eight different cities, which highlights the fact that these concerns are shared by queer people across the state. The campaign functions on the premise that the larger population of Michigan isn’t aware of the discrimination that queer people face in the state, and that “when the majority of the community knows, they get angry… and then we’re going to let them know how they can help.”

But more recent developments in Michigan may suggest otherwise. Grand Rapids, MI recently saw its queer residents put together a “Gay Day” for the very first time, also to raise awareness in their city. Their event was met with rape and death threats from protestors, and the police were called for the protection of the Gay Day participants. When police arrived, no one specific wanted to step forward to file a complaint, and since it was determined that no one was being threatened while the officers were at the scene and they weren’t “breaking any of the protest rules,” no arrests were made.

There’s much more to what makes life different for LGBT Americans than the right to get married. Michigan is a good example of a state in which marriage equality isn’t on the horizon, but neither are a dozen other important rights, from the right for your partner to receive benefits from the state to the right to keep a job you’re qualified for without worrying that your identity will mean it gets taken away from you. But perhaps most of all, the right that people in Michigan (and all over the world) are fighting for and still clearly don’t have, as the Grand Rapids Gay Day demonstrates, is the right to be open about who we are in public without fearing for our safety because of it.