This is the third time that we’ve reported on the new, homophobic mayor of Troy, Michigan, Janice Daniels. First, in our Michigan round-up post, we reported on the firestorm that ensued when her Facebook response to New York’s marriage equality — that she was “going to throw out her I Love New York carrying bag now that queers can get married there” — was made public. Then, in a follow-up article, we told you how in a city council meeting where she was supposed to redeem herself, Daniels instead further proved how clueless she is by, among other things, suggesting that gays should be cured. You’d think the story would be over, right? That Mayor Daniels would realize what a jerk she looked like to the world and would finally keep quiet on LGBT issues?

But first, some context. On Tuesday, June 12, the citizens of Troy finally decided they’d had enough with Daniels – who had been elected “by 600 votes in a city of 81,000 where only a quarter cast ballots,” according to the Detroit Free Press – and submitted a petition for a special recall election. The push to recall Daniels was due not only to her homophobic comments but also her opposition to a transit center that would bring much-needed jobs to Troy, which included offensive “references to the Chinese government” during public meetings about the transit center. The official website for Recall Janice Daniels also lists as reasons her lack of respect for other city employees, particularly those who disagree with her politically, and refusal to take an oath to the city charter.

Yet, her anti-gay comments have harmed the image of the city far beyond the metro Detroit area. The Recall Daniels site also links to outraged e-mails sent to the mayor from people in other states and countries (some as far away as Australia), and even includes an example of someone who changed their plans to stay at a hotel in Troy in outrage – which, they say, is part of a pattern. Indeed, there were several calls for a boycott of Troy businesses due to the mayor’s remarks, and Recall Daniels page suggests they have done actual economic damage to the city — though the Troy Patch reports that most businesses were unaffected. 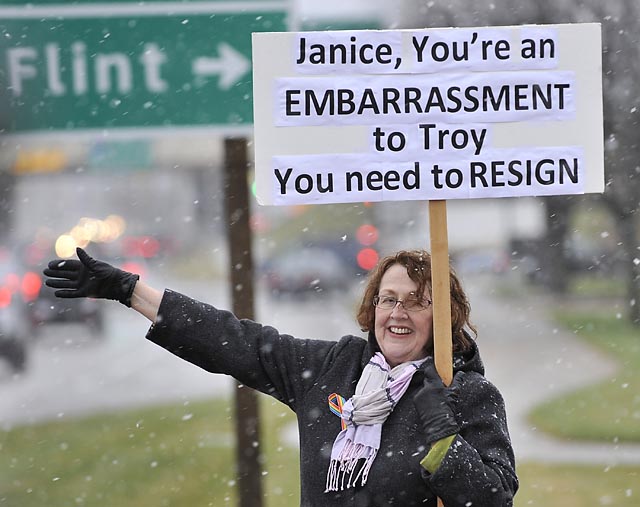 Not that Janice Daniels herself is too concerned, given that, the very morning after the petition for her recall was filed, she appeared on a morning talk-radio show on Detroit’s AM 1270, where she made even more homophobic comments. At one point, she specifically compared the “unhealthy” nature of the “homosexual lifestyle” to smoking:

[Daniels] offered this: “What I said while I was mayor … I was in a business meeting, I come from a business perspective … I said that I would bring a doctor into a meeting that would say that the homosexual lifestyle is dangerous,” Daniels said, adding, “Had I been with a group of smokers I might have said I would like to bring a doctor into this meeting to say that smoking is dangerous.”

Is it dangerous to be gay? [show host Charlie] Langton asked.

“I think that doctors can make a case for it certainly,” the mayor said, adding that she “had no opinion” on whether being gay is more dangerous than smoking.

Certainly, some dishonest doctors out there can “make a case for it,” but that doesn’t change the fact that the reputable American medical organizations insist that homosexuality is not a disease and is not dangerous.

Even back in January, after the infamous City Council meeting, Daniels “clarified” her “gays need to be cured” comments with “What I said was, there’s a higher incidence of [overall] disease in the homosexual community.” Daniels believes this makes the conclusion that she thinks homosexuality is a disease a “misrepresentation entirely.” 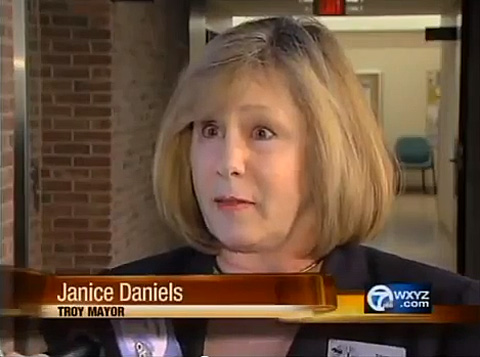 I have to say that it’s been strange to see my home state constantly in the news these days for being anti-gay and anti-women. While I was certainly happy to move away to a “blue state” for college, I had never thought of Michigan as a particularly socially-conservative state when I lived there. It had people who thought that way, sure, but it had plenty of people with different opinions, too. However, I cannot say I am too surprised to see my hometown, Troy, in the news for having a homophobic mayor. As I noted in my previous article on this, many of the politicians who sent mailings to us trumpeted their anti-gay positions as evidence that they were “the most family-friendly choice” for office, even though they clearly didn’t care much for my family.

But Troy is changing. If those old mailings are any indication, Janice Daniels is probably not the first homophobe in Troy’s city government, and so the very fact that she is getting so much press for her anti-gay views shows that Troy voters no longer see those as a plus. And with the Southeast Michigan economy still in a fragile state as the auto industry slowly rebuilds itself, Troy can’t afford to take chances with a mayor whose bigotry might drive away needed business.

While the mayor’s friends in the Troy Tea Party may still stand behind her, a poll in January (after the transit center vote and her disastrous meeting with the Troy High School GSA) showed that 72% of Troy voters supported recalling Daniels.  In a city council meeting Tuesday night, Troy resident Jeff Williams said to Daniels, “[Y]ou have the perfect forum here tonight in front of all of Troy to tell us why 9,300 of your constituents are wrong to ask for you to be recalled.” Yet, it seems like Daniels is making her best effort to prove those 9,300 people right.

If you want to help the campaign to recall Mayor Daniels, you can check out their official website here. They also have a Facebook page.