Legislation designed to protect patients from sexual orientation “conversion therapy” was advanced yesterday by the California state Senate Business, Professions, and Economic Development Committee. The bill, written by Sen. Ted Lieu and sponsored by Equality California, recognizes that changing a patient’s sexual orientation has not been clinically proven to be possible, and can be potentially dangerous. The bill adds a section to the Business and Professions Code that requires patients to sign a specific consent form stating as much. Additionally, the bill bans all sexual orientation conversion therapy for minors “regardless of the willingness of a patient’s parent, guardian, conservator, or other person to authorize such efforts”. 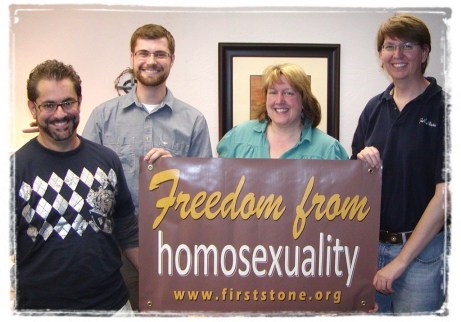 The bill outlines specifically and scientifically the potential dangers of ex-gay therapy and points out the statistically higher risks faced by LGBT youths rejected by their families. Though neither the harmfulness of ex-gay therapy nor the struggles encountered by many LGBT youths are exactly news, I nevertheless find it exciting/shocking/smirk-worthy to see it all laid out in legislative writing.

Sexual orientation change efforts pose critical health risks to lesbian, gay, and bisexual people, including confusion,depression, guilt, helplessness, hopelessness, shame, social withdrawal, suicidality, substance abuse, stress, disappointment, self-blame, decreased self-esteem and authenticity to others, increased self-hatred, hostility and blame toward parents, feelings of anger and betrayal, loss of friends and potential romantic partners, problems in sexual and emotional intimacy, sexual dysfunction, high-risk sexual behaviors, a feeling of being dehumanized and untrue to self, a loss of faith, and a sense of having wasted time and resources…

There’s no way of knowing how much a consent form will do to dissuade those desperate to rid themselves of same sex attraction. What is blah-blah-blah-sign-here in the face of a fantasy everlasting cure? Yet, the wording of the consent form makes it quite clear that not only is ex-gay therapy useless and potentially harmful, but that basically everyone in the mental health world is opposed to it.

Having a lesbian, gay, or bisexual sexual orientation is not a mental disorder. There is no scientific evidence that any types of therapies are effective in changing a person’s sexual orientation. Sexual orientation change efforts can be harmful. The risks include, but are not limited to, depression, anxiety, and self-destructive behavior.

If such therapy is performed without such informed consent (or to a minor) patients/patient families can sue for damages for a minimum of $5,000. This is particularly important in light of the legislation’s specification that “consent that is provided as a result of therapeutic deception or duress or coercion is not informed consent.” Basically, if you go around telling your patients everything on the consent form is false and they should just sign it anyways you’re going to get slapped with a lawsuit.

It would seem Bill 1172 has arrived at a bad time for ex-gay therapy supporters. Just a few weeks ago, Robert Spitzer retracted his ex-gay study results and his previous claims that “at least for a highly select group of motivated individuals, [sexual orientation conversion therapy] worked.” Spitzer admitted that critiques were largely correct, and that his study merely reflects how some ex-gay individuals speak about their experiences. He even issued an unprecedented apology for “making unproven claims of the efficacy of reparative therapy.”

Still, the bill has a rough road ahead of it; the California Psychological Association opposes the bill in its current form. The CPA has taken pro-gay positions on legislation/research in the past and their objection seems to be based on the imposition of government oversight in to patient care, not a belief that conversion therapy works. Specifically, the CPA takes issue with the outright ban on ex-gay therapy for minors. In a letter co-authored by California Association for Licensed Professional Clinical Counselors, California Psychiatric Association and California Association of Marriage and Family Therapists, CPA stated that it was, “troubled by the complete ban on SOCE treatment for minors, especially in the situation wherein the minor legally consents to his/her own treatment free of parental or guardian influence.”

What I think the CPA fails to see is that there really isn’t a way for most minors to consent to something “free of parental or guardian influence.” Just because a teenager can say “My parents have nothing to do with my choice, I don’t want to be gay” doesn’t mean that same kid isn’t already receiving a home-brewed variety of anti-gay or pray-the-gay-away rhetoric, which means their consent wouldn’t really be ‘informed.’ Additionally, while a minor might not actually want ex-gay therapy, they are literally at the mercy of their parents in terms of what goes on at home. Saying no to something a parent wants, especially when faith is involved, is not a realistic option for most kids.

If passed by the California state Senate, Bill 1172 could become model legislation use throughout the country. Though informed consent is always critical, the real beacon of hope here is the ban on ex-gay therapy for minors. Without being allowed to ship kids off to pray-the-gay-away camps, maybe they can figure out who they are before people start telling them who they shouldn’t be.