Along with a horrific bullying-apologist bill that, luckily, did not end up passing, Michigan had plenty of other anti-gay gems this year, like the mayor of Troy who posted homophobic slurs on her Facebook page or the elementary school music teacher who tried to take “gay” out of “Deck the Halls.” One of the more disturbing pieces of anti-gay news out of Michigan, however, was that the state is threatening to take away benefits for same-sex domestic partners of employees of public agencies. Aside from the obvious disadvantage to same-sex couples, it’s also a move that would hurt Michigan; for instance, several professors at the University of Michigan in Ann Arbor reported that they had accepted positions there in part because they knew their partners would be provided for, and might have to leave if that changed, which would leave the U of M lacking. 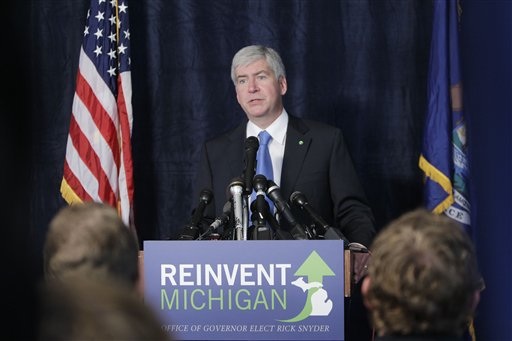 Now the ACLU has become involved, echoing the feelings of same-sex couples across the state: as much as the state may need to cut the budget, doing so by throwing gay couples under the bus is discriminatory. Four public employees have joined the ACLU in a lawsuit that they hope will protect their partners from losing health insurance coverage. According to the ACLU’s own statements about the case, several of their partners need medical support for long-term chronic conditions, like glaucoma and arthritis. For some of the couples, finding health coverage for both of them would require moving out of state.

The bill, HB 4770, was signed into law by Governor Snyder back in December. His letter to the legislature notes that it excludes university employees and the classified state civil service, but all other public employees are now left out in the cold as far as obtaining health coverage for their partners and families. The language of HB 4770 isn’t specifically anti-gay; it doesn’t specify that same-sex partners aren’t eligible for benefits from their partner’s work. But since same-sex marriage isn’t legal in Michigan, the law just happens to target same-sex couples, for whom a domestic partnership is the only legal commitment the state will recognize. Even though the goal is supposedly trimming the budget, the law is structured such that the only people who are disadvantaged for the sake of the larger population are gay families, and it’s this de facto discrimination that the ACLU is fighting against.

The lawsuit charges that the new law discriminates by categorically denying domestic partners access to benefits and violates the constitutional right to equal protection by forcing gay and lesbian employees in committed relationships to carry the financial hardship and anxiety of being uninsured, while allowing heterosexual couples to marry and receive family health protections. In addition, the law only bars domestic partners from receiving health care coverage, while allowing government employers to offer benefits to all other family members, including parents, siblings, uncles and cousins. “It’s unconstitutional for the state of Michigan to deprive a small number of workers the means to take care of their loved ones when other similarly situated workers do have access to family coverage,” said Amanda C. Goad, staff attorney for the ACLU LGBT Project.

Cases like this are frustrating because while very clearly unfair and hurtful to families (and, arguably, to the state of Michigan), they’re actively enabled by DOMA. It’s the reason “separate but equal” doesn’t work — because as long as you can separate out supposedly “equal” situations, like that of a married couple vs. a domestic partner, you can treat them very unequally. It’s possible that Michigan public employees and their families will end up protected by this lawsuit, and the ACLU will be able to keep them from being denied the basic benefits that they’ve earned, and some modicum of security in these uncertain times. But they shouldn’t have to, because these four couples and all other gay families in Michigan should already be entitled to the same rights as their straight counterparts. Michigan hasn’t had a banner year for gay rights, but the laws of the United States aren’t much of an incentive for it to do so. Hopefully this lawsuit will correct Michigan’s mistake, but more importantly, hopefully in the years to come it won’t be a mistake that’s possible to make.