Teaching is always a hard job, but it’s especially difficult for gay teachers, as the Buffalo News discussed back in the middle of October. The treatment you get from colleagues and superiors as well as your kids and their parents leaves little time or energy for actually instructing the next generation. Being gay can even make it impossible to work as a teacher, given that the majority of states in America still allow employers to fire employees on the basis of their sexual orientation. California, Connecticut, the District of Columbia, Hawaii, Illinois, Maine, Maryland, Massachusetts, Minnesota, Nevada, New Hampshire, New Jersey, New Mexico, New York, Rhode Island, Vermont, Washington, and Wisconsin all have laws on the books prohibiting job discrimination on the basis of sexual orientation. Anywhere else, knowing that a teacher (or any employee) is gay is a perfectly valid reason to fire them, especially at a private or parochial school as opposed to a public institution.

At the university level, the situation is slightly different, but no one is out of the woods. It’s harder to defend the kind of predatory alarmism that teachers of young students or minors have to deal with — a Niagara Falls teacher who spoke to the Buffalo News said that “I can’t think of another job where being gay would be so taboo — just because you’re around children, and people think the worst.” Generally speaking, university professors and employees deal with students who are legal adults. There are still plenty of colleges and universities — particularly religious ones — where gay professors and their families aren’t welcome, though.

Shorter University, a Christian Baptist university located in Georgia, is taking a new and different but still very unwelcoming tack. On October 26 200 employees were sent a “personal lifestyle pledge,” which they are asked to sign and in doing so “reject homosexuality, as well as premarital sex, adultery and other behavior the school says violates the Bible’s teaching.” It also requires that professors be active in a local church. And yes, the school’s administration has announced that anyone who doesn’t sign the pledge may lose their job. “I think that anybody that adheres to a lifestyle outside of what the biblical mandate is would not be allowed to continue here,” said the school’s president, Don Dowless. 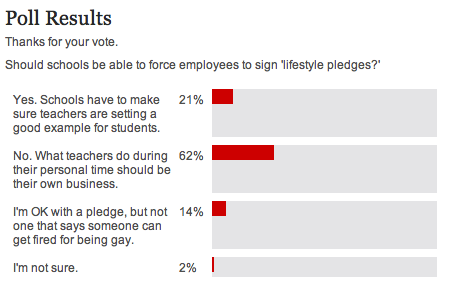 One gay man employed at Shorter spoke anonymously to the Georgia Voice, a local GLBT news publication, about his fears as an employee. He says that he fears the new policy will encourage “witch hunts” on campus — “We now will live in fear that someone who doesn’t like us personally or someone who has had a bad day will report that we’ve been drinking or that we are suspected of being gay.” He sees the way homosexuality is dealt with in the new policy, being specifically called out along with premarital sex and adultery, as being specifically aimed to target queer employees:

It also seems to place homosexuality in a different category. By that, I mean that adultery and pre-marital sex are, in fact, choices. Homosexuality is not. I know this point is up for debate in the fundamental Christian world, but to the rest of the world, we know that it isn’t a choice. Without getting in to that whole debate, it does seem anti-gay to hone in on something that is not a choice and that has so few references in the Bible when compared to the myriad heterosexual “thou shall nots.”

Some have placed at least part of the blame on the unnamed professor — after all, didn’t he take a position at a university he knew was Biblically based and would disapprove of his identity? He says his identity doesn’t absolve the university of their responsibility to treat him like a person and a fellow Christian:

Why is homosexuality so much worse than anything else in the Bible? Why does a homosexual deserve to be fired any more than an obviously egotistical person, or a lazy person, or a dishonest person?… The bottom line is that I am a gay Christian and I made a decision to be around other Christians. I’m not alone and it is sad to see organizations shun people like me. I’d assume that if you’re a strong Christian, you wouldn’t need to turn those away who sin and instead you’d welcome them with open arms because they love Jesus.

But the fear and uncertainty that gay teachers and their families have to face isn’t limited to religious institutions; simply deciding that queer professors should stay away from them won’t solve the problem. At the University of Michigan in socially liberal Ann Arbor — a publicly funded, well-regarded and internationally renowned university in a large number of fields — gay professors are having to consider cutting their losses and leaving their posts, because the state of Michigan is threatening to take away their domestic partner benefits.  It’s not under the university’s control; the Michigan House of Representatives is responsible for having passed bill 4770, which holds that since giving benefits to the same-sex partners of university employees costs the state $7000-$10,000 per person, they should be cut as an unnecessary expense. To the employees of the university, for whom caring for their family is not an unnecessary expense, it’s enough that they’re considering leaving, and taking their academic prowess and expertise with them.

“I question my decision to come to Michigan,” [linguistics professor Andries Coetzee] said. When Coetzee accepted a job at U-M, he also turned one down at New York University. “I chose Michigan because it just seemed better. But now New York just made same sex marriage legal and now in Michigan… they want people like my partner to not get treated… The consequences of this is that I am actively applying for jobs elsewhere… at universities that don’t have these limitations,” Coetzee said. “I don’t want to leave the University of Michigan, I am really happy here. It’s a great school to work at, but I have to take care of my family.” 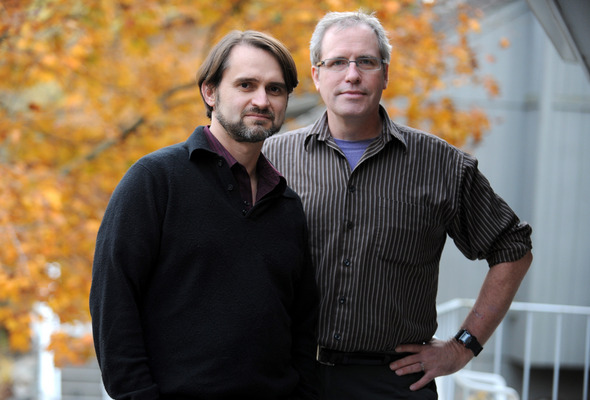 COETZEE AND HIS PARTNER/ PHOTO CREDIT ANGELA CESERE VIA ANNARBOR.COM

Coetzee’s partner is currently in remission after suffering from soft tissue sarcoma, a rare cancer. It could reoccur at any time.

The state of Michigan’s decision — the bill is currently being considered by the state Senate — doesn’t just affect the 618 people that it’s claiming are too expensive, it affects the entire university. The linguistics department at the U of M would suffer without him, as would the students who came to the university looking for his mentorship and expertise. And Coetzee isn’t the only person the university might lose; university librarian Scott Dennis says,

“I am concerned for the university as a whole… It would be a really damaging blow to the university’s reputation as a fair and humane employer. I think it would cause us to lose faculty and never get them back.”

Dennis and his partner of 10 years are just one of the couples who came to the U of M in part because of their domestic partner benefits.

In part because of the recession, fears about a national teacher shortage are increasingly urgent. Students at the U of M are worried about losing their professors; students at Shorter are worried that it’s only a matter of time before they’re also signing “personal lifestyle pledges.” (It’s not so far-fetched; students at Brigham Young University essentially already do.) It’s clear that there are plenty of places of education and government organizations that aren’t willing to make the rights of gay employees a priority; will their priorities change if the education and wellbeing of their students is at risk?